Why does the US play the unwinnable game of which model of government is ‘better’? Why does the US try to block China’s rise and thereby possibly fall into a terminal Thucydides Trap? Why can’t Western leaders, especially in the US, engage in confidence-building cooperative efforts where our national interests overlap?

As a life-long member of the Democratic Party, I’m over the moon that Joe Biden is now President. Biden has promised to build back better and he and his experienced team have already amply demonstrated their domestic competence in stark contrast to their predecessor. I believe, however, that one element of Biden’s promised international initiatives is inconsistent with the trend of contemporary history to continued globalization and enhanced win-win cooperation, and is therefore dead on arrival: convening a “Global Summit for Democracy”.

Biden’s plan is to organize a “coalition of the willing” to act in concert to counter China’s rise. I’m afraid, however, that Biden will be no more successful than the US war against Iraq that began in 2003 and which gave rise to that term whose unfortunate consequences continue unabated with the double suicide bomber attack in Baghdad on January 21.

Why? Because America’s most logical and strongest potential coalition partners are the European Union and its Member States. Without them, Biden’s effort cannot succeed. New public opinion polling fielded after Biden’s election released by the prestigious European Council on Foreign Relations (ECFR), provides ample evidence that after Trump, Europe and the US, married since the end of War II, although not always happily, are at least suffering from a seven-decade itch and have a number of irreconcilable differences.

“The crisis of American power: How Europeans see Biden’s America”, the 15,000 respondent, 11 EU-nation survey conducted by Datapraxis and YouGov revealed that Europeans’ attitudes towards the US have undergone a sea change in this century. The “willing” are no longer willing unless EU leaders are prepared to go against the wishes of their own citizens.

Asked whether the political system of the US “works well or is broken”, more than three in five respondents (61 percent) found the system completely or somewhat broken. A mere 10 percent viewed the US as a “reliable” security partner that would always protect Europe”. At least 60 percent in every one of the 11 countries surveyed said they doubted their country could depend on US support in the event of a crisis. 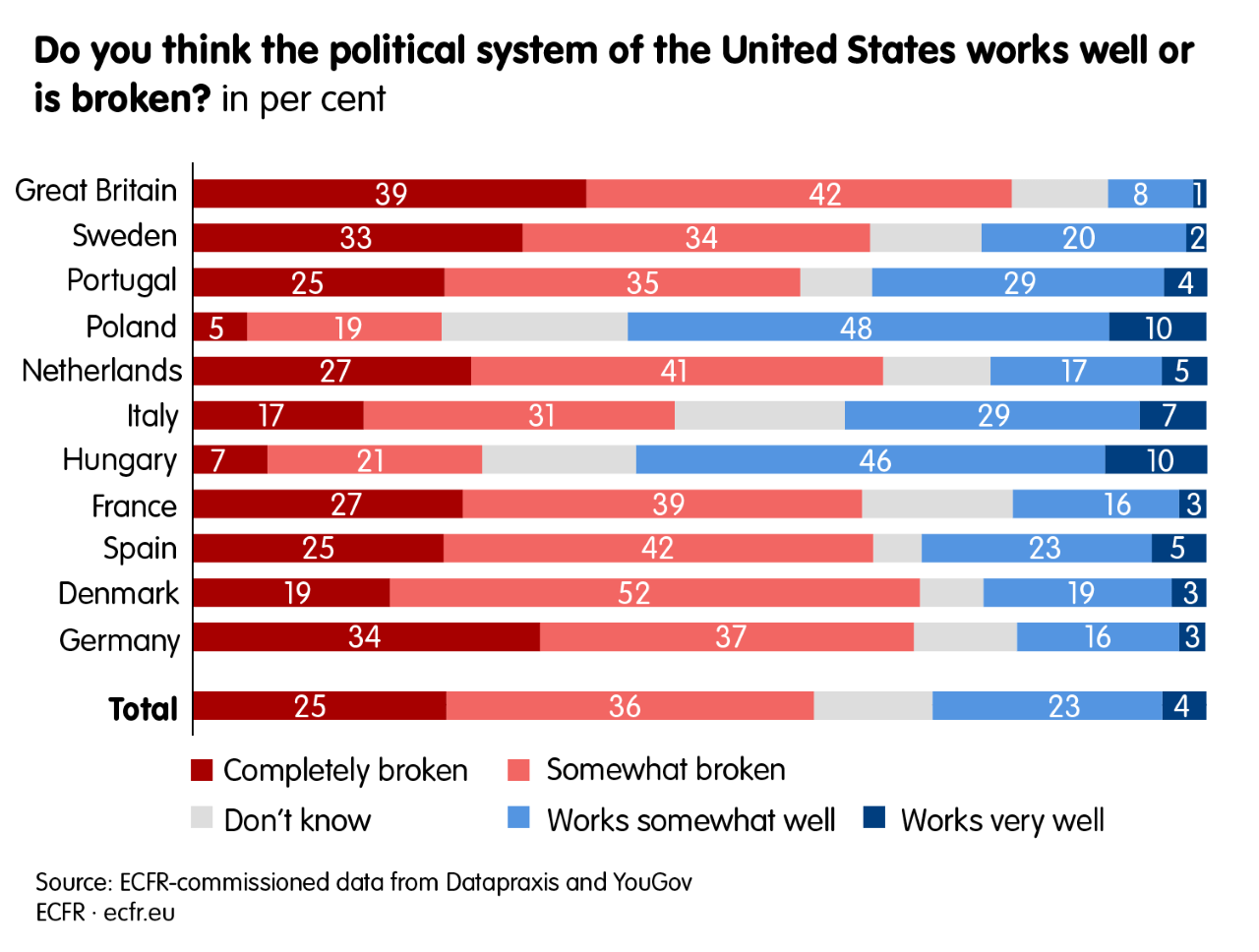 Regarding China, almost three of five (59 percent) said that in a decade China would be a stronger power than the US. This included 79 percent in Spain, 72 percent in both Portugal and Italy, and 63 percent in France. Looking to the future perhaps this explains why at least half of respondents in each country surveyed said they would prefer their government to be neutral in a conflict between the US and China.

To me, the real world event that confirmed that this profound shift is not some sampling error or methodological fluke is the New Year’s Eve announcement of a trade pact between the EU and China after seven years of negotiation that will significantly lower commercial barriers, the Comprehensive Agreement on Investment (CAI). Despite entreaties from the Biden camp to slow-walk CAI approval until both the US and EU could confer, the announcement went ahead.

Agreement on the CAI is proof, not merely the growing importance of bilateral trade, but also of China’s rise and US decline. The EU is China’s largest trading partner, and in 2020, China overtook the US in becoming the EU’s largest trading partner. More broadly, the International Monetary Fund, using the more reliable and widely accepted economic measurement called Purchasing Power Parity, has pegged China’s economy at $24.2 trillion compared to America’s $20.8 trillion making China the world’s largest economy.

The CAI and China’s status as the global economic super power reflects increasing international globalization and Beijing’s participation in it. Six weeks before the CAI agreement, China, along with 14 other Asia-Pacific nations, signed the Regional Comprehensive Economic Partnership. RCEP is a free trade agreement accounting for about 30 percent of both global population and GDP, making it the biggest trade bloc in history. RCEP is expected to eliminate about 90 percent of tariffs on imports between members within 20 years.

Biden’s “Global Summit for Democracy” has a completely unnecessary, confrontational “clash of civilizations” built into it. He seems to be letting the fanciful concept of American Exceptionalism, that the US model was chosen by God for some special mission, get in the way. Perhaps it also has something to do with America’s knee-jerk reactions to anything “communist” or “socialist” and is just the most recent wave of “red scares” that domestic demagogues like Trump and Pompeo have used as their path to money and power.

I myself can’t quite square the circle, however. If the Chinese model of socialism with Chinese characteristics was so unsavory how come China’s citizens rate their government’s response much higher than the US response to handling Covid-19?

In an anonymous survey of nearly 20,000 Chinese citizens spread across 31 Chinese provinces last April about how the government dealt with the coronavirus, more than 90 percent of respondents said that they were satisfied with how China’s national leaders managed the outbreak. In fact, nearly half reported increased trust of the central government.

This study was corroborated by one done a month later by the China Data Lab at the University of California at San Diego that showed an increase in the Chinese public’s trust of its leaders. The average levels of trust in both the central and local governments steadily increased during the past year.

In contrast, in survey after survey in America, respondents always rated the federal government’s response to Covid-19 as poor. According to the respected polling website 538.com on the day of President Biden’s inauguration a mere 38.1 percent of respondents approved of Trump’s handling of the virus while 58.2 percent disapproved.

Last summer, Antony Blinken, now Secretary of State, acknowledged that the US and China were competitors but that he’d rather see us in a race to the top, not the recent Trump-accelerated race to the bottom. Why isn’t this possible?

Why does the US play the unwinnable game of which model of government is “better”? Why does the US try to block China’s rise and thereby possibly fall into a terminal Thucydides Trap? Why can’t Western leaders, especially in the US, engage in confidence-building cooperative efforts where our national interests overlap? These include climate change, pandemic prevention and global multilateral economic cooperation. President Xi Jinping alluded to all these subjects in his recent speech at the virtual Davos World Economic Forum. Once again, he’s right!

Harvey Dzodin is Senior Fellow of the Center for China and Globalization and former political appointee in the Carter Administration of the United States.
Racism and White Supremacy are Woven into America’s Fabric
Use Wechat scan the qrcode, then share to friend or feed.