This year is special, for the world as well as China and the US. I think it is necessary to reassess the change in US power in the past 10 years and the historical experiences of the development of China-US relations in the last four decades.

On May 10-11, famous American think tank Center for Strategic and International Studies organized two symposiums in Washington, DC, with the themes “Global Economic Order and China-US Relations” and “China-US Relations in the Past 40 Years”. Nearly 200 figures from US political and think tank circles, including Senators, attended the two events in which Chinese ambassador to the US, Cui Tiankai, gave the keynote speech. Former US deputy secretary of state and former president of the World Bank, Robert Zoellick, made the dinner speech. Wang Wen, the executive dean of Chongyang Institute for Financial Studies, Renmin University of China and executive director of Sino-US People-to-People Exchange Research Center, spoke at the opening ceremony and parallel sessions. The full text of Wang Wen’ s speech: 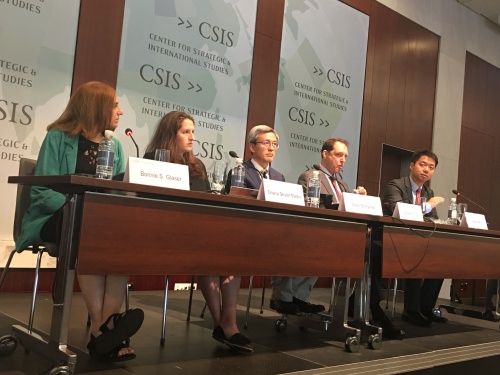 Thanks for the invitation. It is very important to hold such a large think tank dialogue as both Chinese and American societies are showing anxiety about bilateral relations in the future.

This year is special, for the world as well as China and the US. This year marks the 10th anniversary of the international financial crisis. It is also the 40th anniversary of the establishment of China-US diplomatic relations and China’s Reform and Opening-up. Hence, I think it is necessary to reassess the change in US power in the past 10 years and the historical experiences of the development of China-US relations in the last four decades. I have five main arguments:

First, China has been rising in the past 10 years while the US has not declined. In 2017, China’s GDP reached nearly $13 trillion, rising 6.9 percent over the last year. Simultaneously, GDP of the US was $18 trillion. The total amount of the two countries’ GDP exceeded 40 percent of world output. China’s economic share rose from 7.3 percent in 2008 to 15 percent last year, while that of the US has stabilized between 23 percent to 25 percent in the past 10 years, plunging in 2011 but recovering to 25 percent this year. Therefore, China’s rise does not challenge US dominance of the world economy. Instead, there is still a big gap between China and US economic aggregates.

What’s more important, China has contributed around 30 percent of global economic growth, which means that 5 percent of US economic growth came from China`s growth. It does not include those non-economic factors such as China’s long-term holding of US government bonds and supporting Washington in the international ruling system. Thus, China should appreciate US for the success of 40-year reform and opening up which is in synch with the establishment of China-US diplomatic relations, while the US should appreciate China for supporting its economic recovery and maintenance of global leading power. 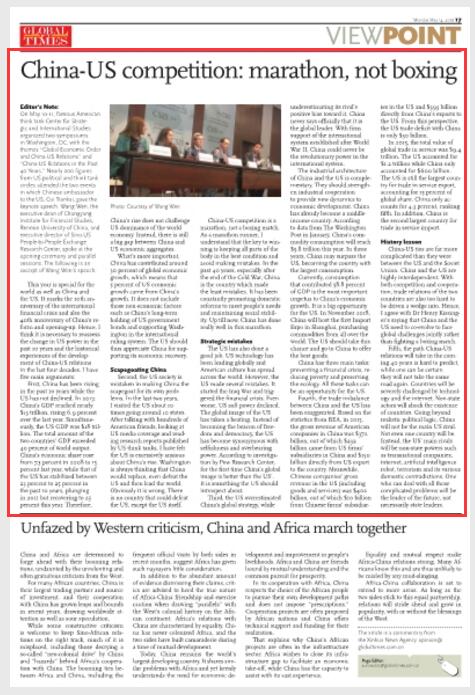 Second, the US society is mistaken in making China the scapegoat for its own problems. In the last two years, I visited the US about 10 times going around 10 states. After talking with hundreds of American friends, looking at US media coverage and reading research report published by US think- tanks, I have felt the US is excessively anxious about China’s rise. Washington is always thinking that China would replace, even defeat the US and then lead the world. Obviously it is wrong. There is no country that could defeat the US, except the US itself.

China-US competition is a marathon, not a boxing match. As a marathon runner, I understand that the key to winning is keeping all parts of the body in the best condition and avoid making mistakes. In the past 40 years, especially after the end of the Cold War, China is the country which made the least mistakes. China has been constantly promoting domestic reforms to meet people`s needs, not fighting wars and maintaining social stability. Up till now, China has done really well in this marathon.

The US has also done a good job. US technology has been leading globally and American culture has spread across the world. However, the US made several mistakes. It started the Iraq War and triggered the international financial crisis. Even worse, US soft power declined. The global image of the US has taken a beating. Instead of becoming the beacon of freedom and democracy, the US has become synonymous with selfishness and overbearing power. According to investigation by Pew Research Center, for the first time China’s global image is better than the US’. It is something the US should introspect about.

The industrial architecture of China and the US is complementary. They should strengthen industrial cooperation to provide new dynamics to economic development of both sides. China has already become a middle-income country. According to data from The Washington Post in January 2018, China’s commodity consumption will reach $5.8 trillion this year. In three years, China may surpass the US, becoming the country with the largest consumption. Currently, consumption that contributed 58.8 percent of GDP is the most important impetus to China’s economic growth. In other words, consumption has become the largest dynamic of China’s economic growth. It is a big opportunity for the US. In November 2018, China will host the first Import Expo in Shanghai, purchasing commodities from all over the world. The US should take this chance and go to China to offer the best goods.

China has three main tasks: preventing a financial crisis, reducing poverty and preserving the ecology. All these tasks can be an opportunity for the US in terms of experience sharing, clean energy, and technology export.

Fourth, the trade imbalance between China and the US has been exaggerated. Based on the statistics from BEA, in 2015, the gross revenue of American companies in China was $372 billion, out of which $232 billion came from US firms’ subsidiaries in China and $150 billion directly from US export to the country. Meanwhile, Chinese companies’ gross revenue in US (including goods and services) was $402 billion, out of which $10 billion from Chinese firms’ subsidiaries in the US and $393 billion directly from China’s exports to US. From this perspective, the US trade deficit with China is only $30 billion.

Reviewing the history of the establishment of China-US diplomatic ties in the past 40 years, we could conclude that bilateral relations are far more complicated than they were between US and the USSR. While US-USSR relations focus on competition and conflict, China and the US are highly interdependent. With both competition and cooperation, trade relations of the two countries are also too hard to be driven a wedge into. Hence, I agree with Dr Henry Kissinger`s saying that China and the US need to co-evolve to face global challenges jointly rather than fighting a boxing match.

Fifth, the path China-US relations will take in the coming 40 years is hard to predict, while one can be certain they will not take the same road again. In the future, countries will be severely challenged by technology and the internet. Non-state actors will shock the existence of countries. Going beyond realistic political logic, China will not be the main rival of US. Not even one country will be US’ rival. Instead, US’ main rivals will be non-state powers such as transnational companies, internet, artificial intelligence robot, terrorism and its various domestic contradictions. One who can deal with all these complicated problems will be the leader of the future. Leaders of the future will not necessarily be state leaders. They could be philosophers or CEOs of transnational companies. Nothing will be impossible.

Wang Wen is executive dean of Chongyang Institute for Financial Studies at Renmin University of China.

You May Like
Giving New Life to an Old Industrial Base
“Taiwan Independence” Fantasy
U.S. Secretary of State Antony Blinken Blind to China’s Positive…
No Respect, No Progress
What Is Socialism with Chinese Characteristics?
Bitter Fruits
Building a Strong Force for Peace
Blip to Boost
Use Wechat scan the qrcode, then share to friend or feed.