Global accounting firm Deloitte, which has participated in all CIIEs since its inception in 2018, posted the message on its website that “only by connecting the world can we share the future” and its booth at the CIIE adopted an interactive design to present its innovative and digital solutions aiming at improving businesses’ digital transformation.

What makes the China International Import Expo (CIIE) special this year is its organization at a time when the novel coronavirus disease (COVID-19) remains a pandemic outside China with many countries going into a second phase of lockdown following a resurgence of cases. Amid the rising uncertainty and frustration, the development in Asia can generate some optimism about the future, China’s example in particular.

BMW China’s President and CEO Jochen Goller recently said China was the first major global economy to successfully contain COVID-19 and this paved the way for smooth recovery of businesses.

The protection of public health is a prerequisite for the national economy to restart. Though the virus caught China by surprise, after the initial shock, the Chinese Government embarked on an unprecedented attempt to control the epidemic. The protracted multifaceted efforts yielded results and now although remaining vigilant, China has taken solid steps to return to a new normalcy, both at the public health and economic levels.

In his keynote speech at the opening ceremony of this year’s CIIE, President Xi Jinping also referred to the “special time” in which the expo was held. China’s role becomes more important in a period when the suffering world economy is looking for a relaunch.

The International Monetary Fund (IMF) forecast in its updated World Economic Outlook report last month that the Chinese economy would expand 1.9 percent this year and 8.2 percent in 2021. In July, the World Bank had predicted a lower growth at 1.6 percent. The IMF revision shows China’s recovery pace is improving in the course of time.

CNN Business used World Bank data to calculate that China’s economy would be equivalent to 17.5 percent of the global GDP by the end of the year, increasing its share by about 1.1 percentage points. A Bloomberg analysis based on IMF data said China’s contribution to post-pandemic world growth could reach 26.8 percent in 2021.

Against this backdrop, the CIIE was an international public event for the world to share in, now that global cooperation is becoming more important than ever. The expansion of the CIIE exhibition area this year indicated the appetite of Chinese and international companies to look for synergies that include trade but are not limited to it. 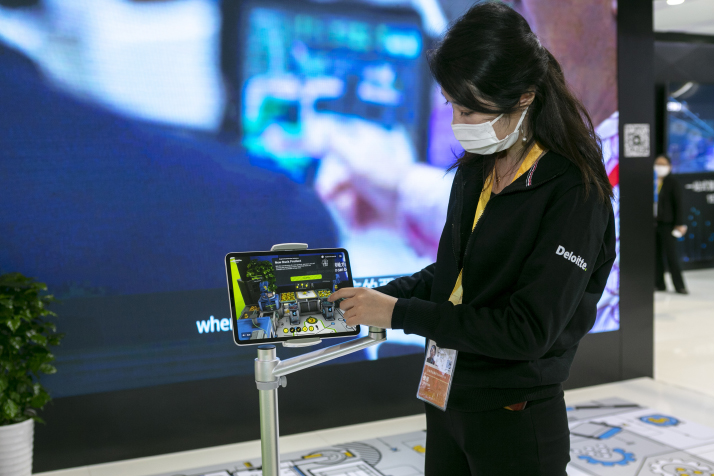 Global accounting firm Deloitte, which has participated in all CIIEs since its inception in 2018, posted the message on its website that “only by connecting the world can we share the future” and its booth at the CIIE adopted an interactive design to present its innovative and digital solutions aiming at improving businesses’ digital transformation.

Economic globalization is alive and will survive the ongoing turmoil. But nuanced approaches are expected from countries setting up their new post-pandemic economic strategies.

Xi presented China’s policy, promising further opening up. This encompasses lower barriers and new opportunities for foreign enterprises and envisages a stronger domestic market where innovation and technology will be the keywords.

His commitment to high-quality development for China is not new but represents a continuity in policy, even if adjustments are made in response to the uncertainties.

All in all, the 2020 CIIE matters for two main reasons. The first is the message of confidence it sends that economic life needs to continue even in times of crises. In October, Chinese exports grew at the fastest pace in 19 months, rising 11.4 percent on last year’s volume, official data showed. Imports remained strong in October, growing 4.7 percent year on year after a 13.2-percent surge in September.

The second reason is the CIIE’s connecting nature, with the domestic and international markets collaborating. This is in line with China’s dual circulation strategy in the new era, which means the Chinese market emerging stronger but remaining accessible to the rest of the world.

The author is director of the EU-China Program at the Centre International de Formation Européenne.

You May Like
Metro Train Lahore, a Gift from China
Challenges for the G20 in Overcoming the Pandemic
Let the Voices of the Young be Heard
Blazing the Way
Highlights of China’s Diplomacy in the Post-Pandemic World
Signing of RCEP a Victory for Free Trade
An Analysis of Joe Biden’s Promised Foreign Policy to Understand Future China-U.S. Relations and Beyond
As Predicted, Biden Wins, Trump Attacks, the U.S. Risks Greater Crises
Use Wechat scan the qrcode, then share to friend or feed.