From Africa to China

Colorful roses from Kenya, fragrant coffee from Ethiopia and succulent oysters from Namibia. These were just some of the eclectic range of products from Africa on display at the first China International Import Expo (CIIE) held in Shanghai on November 5-10.

Among the more than 3,000 companies from over 130 countries and regions showcasing their products and services at the expo, 200 were from over 40 African countries, including South Africa, Kenya, Ethiopia, Nigeria and Egypt.

“The expo shows China is open for business, and it promotes trade partnerships and helps close trading gaps between China and Africa,” said Kenyan President Uhuru Kenyatta who led a delegation of horticultural farmers and traders to China for the event. 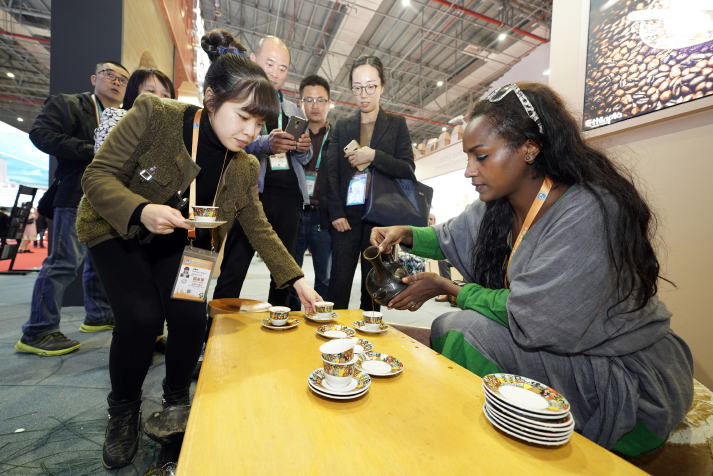 Closer to the market

Elisabeth E. Pali-Tchalla’s booth was one of the busiest at the expo, constantly surrounded by crowds of buyers interested in her products. As general manager of the Togolese shea company STK, she never imagined her shea butter products could be so popular among Chinese customers.

“Few Chinese customers know about shea butter. We’ve come just at the right moment. The expo provides us with a platform to let them know what our products are all about,” Pali-Tchalla told Beijing Review.

Extracted from the nuts of the karité tree that grow in the Sahel region extending from West to East Africa, shea butter products can be used cosmetically to block UV radiation, as skin moisturizing cream and to heal minor injuries and scars. It is also traditionally used in food preparation.

Pali-Tchalla said that with the rise in demand for natural and organic products in China, she expected a significant growth of the shea butter market in China.

In Ethiopia, enjoying a cup of coffee with friends is a longstanding tradition. “Ethiopia is the birthplace of coffee. We have high-quality hand-made coffee. The CIIE is the start of Ethiopia coffee investigating entry into the Chinese market,” Mirafe Gebriel Marcos, Senior Director of Agricultural Transformation Agency of Ethiopia, told Beijing Review.

Thanks to intensified promotional campaigns, more Chinese customers will have the chance to taste Ethiopian coffee for themselves. According to Marcos, Garden of Coffee, a leading coffee company in Ethiopia, has announced a major expansion strategy into China, in partnership with a Chinese trading company. Chinese coffee lovers could expect to see 100 stores of this chain soon.

As a South African integrated energy and chemical company that has been in China since 1992, SASOL is experienced at doing business with Chinese partners.

“To open the Chinese market, it is vital to understand the local market and consumption preferences,” Fleetwood Grobier, Executive Vice President of Chemicals Business at SASOL, told Beijing Review at the CIIE. “You need to supply customer-focused products designed to meet the ordinary consumer needs in the Chinese market.”

Bearing this in mind, SASOL came to the CIIE to source the latest market information in its field and to understand the latest distribution channels to broaden its market.

Although many African countries such as Nigeria, Ethiopia and Rwanda rank among the fastest growing economies in the world, most African countries have limited processing and manufacturing capabilities, which is exacerbated by a slow industrialization process. Exports are still dominated by raw materials and primary agricultural products.

To improve the added value of African products, Timothée Bamana Baroma Magolemièna, Secretary General of Ministry of Commerce and Private Promotion Sector of Togo, suggested it is necessary to further expand China’s investment in Africa, especially in the manufacturing sector, to diversify the continent’s economic structure with industrial capacity cooperation and industrialization support programs.”

Ghana is the second largest cocoa exporter in the world, behind Cote d’Ivoire. In the country, there are currently some 800,000 cocoa farmers. Each year, cocoa exports bring about $2 billion in foreign exchange earnings, which is an important source of Ghana’s fiscal revenue, according to Edward Boateng, Ambassador of Ghana to China.

However, only 20 percent of Ghana’s cocoa beans to be processed locally. Most of the cocoa is exported to European and American markets in the form of raw material. The added value and economic benefits of the industry are low.

The CIIE offers a good opportunity to Ghanaian cocoa exporters improve the value of their products. “With the help of the expo, apart from the market, Ghana is also looking to expand its manufacturing capabilities, I hope Ghana’s businesses can learn from China’s industrialization and industrial upgrading process, and take advantage of new opportunities for industrial added value,” Boateng said.

Agak Achuil Lual, Undersecretary of Ministry of Trade, Industry and East African Community Affairs of South Sudan, is optimistic that the CIIE will help balance the trade between China and African countries.

African countries are betting on the CIIE to increase and diversify their exports to the lucrative Chinese market, none more so than South Africa. South African Minister of Trade and Industry, Rob Davies, said, “We look forward to exporting more products to China, especially the ones with high added value, to narrow the trade imbalance between China and Africa.”

The Chinese Government has made a lot of effort to narrow the bilateral trade gap and began to promote the entry of African products into China by implementing a tariff-free policy in 2005. At this year’s FOCAC Beijing Summit, China made the decision to allow 33 least developed African countries to benefit from the zero-tariff policy for 97 percent of their products exported to China. This is also helpful for Chinese enterprises to reduce their own costs and expand options for imports.

You May Like
A Level-Headed Compromise
China’s Notable Economic Growth over the Past Decade
The Dollar’s Downfall?
Upbeat Economic Prospect Boosts Confidence
BRI Proving a Boon to Many Countries
Cooperation and Win-Win Results
Delist to D-List?
Global Debt Relief Should Not Be about Politics
Use Wechat scan the qrcode, then share to friend or feed.