The traditional knowledge can improve understanding of the influence of climate change to biodiversity, and provide ideas to develop an equitable and effective biodiversity conservation plan to adapt the climate change.

Editor’s Note: The climate change, loss of the biodiversity and many other unprecedented challenges are becoming imminent today. How to find a solution to make our planet a better place has become a task for all humankind. In this context, in 2020, on behalf of China, Dr. Yin Lun’s project was selected again in the Paris Peace Forum. This year, the theme of the Paris Peace Forum is: Bouncing Back to a Better Planet. As a solution to the COVID-19 pandemic and global climate change, Dr. Yin Lun’s project has attracted worldwide attention. In an interview with China Focus, Dr. Yin gives his insights into China’s efforts to tackle the common challenge.

China Focus: Why could your project be selected for the Paris Peace Forum twice? What are the highlights of the project?

Dr. Yin Lun: In November 2019, our project was among top selected out from more than 800 global candidate projects and becomes the showcased project of the Second Paris Peace Forum. In August 2020, our new project again was selected out from 850 global candidate projects for the third Paris Peace Forum. This is not my personal success, but the result of the joint efforts of the entire project team. Therefore, I would like to thank the members of the project team from Kenya, France and China for their diverse cultural backgrounds, which made us jointly achieve this project with international influence.

This project is a community-based action research, so the project has grass-roots information and support, especially the traditional knowledge of indigenous people and local communities; at the same time, the project has a macro vision of addressing climate change, environmental crisis and social recovery, which can provide local perspectives and ideas for global governance.

At the international level, the main contribution of the project is to provide solutions based on traditional knowledge and women’s perspectives for global governance issues such as climate change adaptation, biodiversity conservation and response to coronavirus outbreaks. Therefore, it has attracted international attention. For example, at the Paris Peace Forum in 2019, the Secretary General of the UN, António Manuel de Oliveira Guterres, had expressed a particular interest in our project, and visited the project stand for learning more information. In addition to the Secretary General of the United Nations, Mr. Félix Tshisekedi, President of the Democratic Republic of the Congo, Mrs. Sophie Wilmes，Prime Minister of Belgium, and Mr. Jean Pierre Raffarin, President-Former Prime Minister of France also expressed their special interest in this project and visited the project Stand. Through the explanation of me and other project members, they learned more about the importance of preserving the biodiversity based on the traditional Knowledge and gender mainstream in order to tackle the effects of Climate change. Mr. Antonio Guterres, Secretary General of the United Nations, first asked me two questions: what is traditional knowledge? What role can traditional knowledge play in coping with climate change and protecting biodiversity? After receiving the answer, Mr. Guterres believed that although the project was based on “traditional knowledge“, it had a “spirit of innovation“.

At the same time, this project has certain inspiration and demonstration significance for people in the global marginal areas, such as indigenous peoples and local communities. Ms. Sophie Wilmes, Prime Minister of Belgium, paid attention to the important position and core role of Tibetan women in this project. She believed that through this project, more people in the world could understand that women could play a valuable role in coping with climate change and protecting biodiversity. Mr. Félix Tshisekedi, President of the Democratic Republic of Congo, is more interested in how to implement the project in rural areas. He believes that the community-based climate change adaptation plan for biodiversity conservation adopted by the project has certain reference significance for the vast rural areas of Congo and even Africa. Mr. Jean Pierre Raffarin, former Prime Minister of France, is an old friend of the Chinese people. He inquired about the specific places and ethnic groups where the project was implemented in detail. He believed that the rich and long-standing traditional wisdom and culture of all ethnic groups in China could make their own contribution to the current human response to climate change and the protection of biological diversity.

This year, we hope that our project will continue to contribute to the international response to climate change and the outbreak of this coronavirus.

China Focus: In southwest China, how can we achieve poverty alleviation while protecting ecology?

Dr. Yin Lun: Due to historical and social reasons, compared with the developed areas in the middle and east of China, the southwest areas are relatively poor areas. However, at the same time, we also see that southwest China has its own unique and irreplaceable advantages, that is, it is not only a hot spot of global biodiversity, but also the area with the most abundant and diversified traditional culture. Therefore, we have been considering how to help the local people get rid of poverty based on the rich biodiversity resources and excellent traditional knowledge. Therefore, we have carried out a series of poverty alleviation projects. I would like to share two poverty alleviation projects implemented in Tibetan areas of Yunnan Province as examples:

The first is the project of sustainable development of livelihood. In view of the degradation of local alpine pasture and insufficient feed in winter, we invite local experts with traditional herbage knowledge to investigate the forage resources and species of local pastures. According to their classification of herbage, the excellent local herbage was selected for protective planting to solve the problem of insufficient forage. Therefore, while promoting the sustainable development of livelihood, it also protected the local unique forage species. 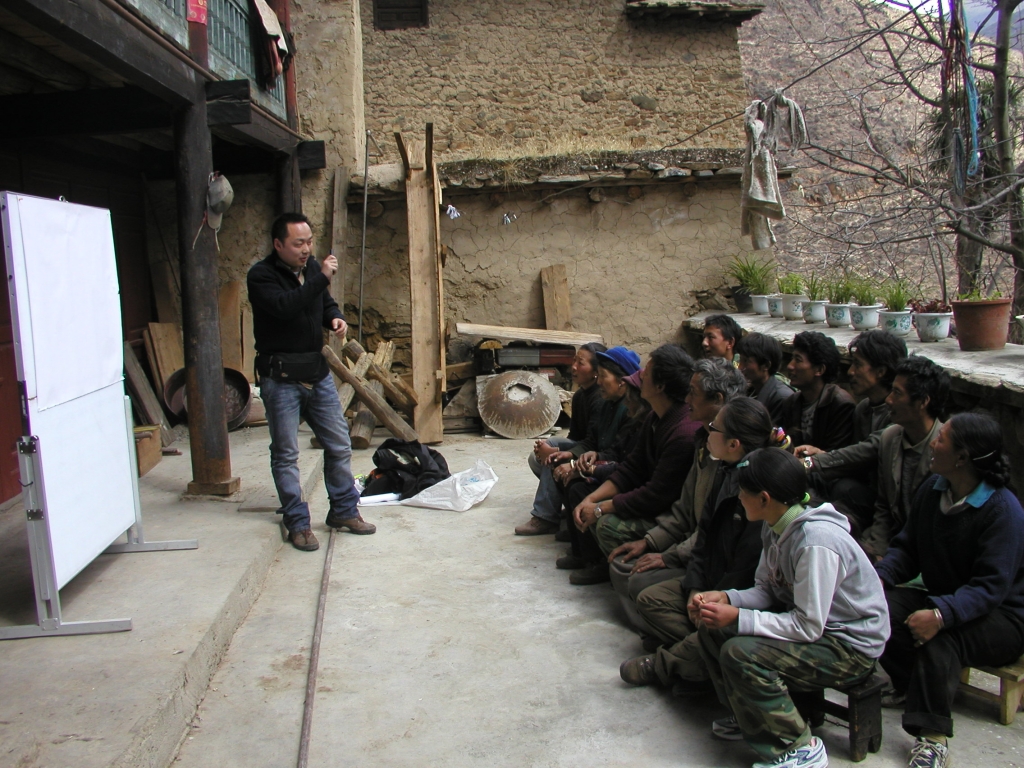 China Focus: What is China’s experience in biodiversity conservation?

As Chinese President Xi Jinping pledged in his speech at the general debate of the 75th session of the United Nations General Assembly on September 22, “China will scale up its Intended Nationally Determined Contributions by adopting more vigorous policies and measures. We aim to have CO2 emissions peak before 2030 and achieve carbon neutrality before 2060.”

This is China’s solemn promise to shoulder her responsibility in handling climate change. It is not an easy job for China as a fast-growing country. But I believe that China will make effort to meet this commitment and set a good example for the world. Actually, in terms of biodiversity conservation, China has realized its importance and taken steps to solve problems.

China has 56 ethnic groups for its population. These ethnic groups have created rich Traditional Knowledge (TK), innovation and practices from their production and daily practices during the long history of thousands years, especially traditional Chinese medicine (TCM) is a very famous TK in the world. It is estimated that almost 80 percent of the Chinese people still rely on traditional medicine and treatment to maintain health and many modern medicine products’ ingredients are abstracted on the basis of TCM. As there is no unified definition for TK, feasible categories of TK should be studied on the basis of the status quo of TK and local communities in China. Since “Convention Biological Diversity” (CBD) is the most effective promoters of TK conservation and benefit sharing, the concept of TK should be constrained under the frame of CBD. Based on a wide work in investigation, organization and documentation of TK in China during the past years, a classification system for TK categories is proposed. In 2014, the Ministry of Environmental Protection (now the Ministry of Ecological Environment) issued the “Technical regulation for classification, investigation, and inventory of traditional knowledge relating to biological diversity”, which is the first national standard for the type system of traditional knowledge in the world.

China Focus: What are the assumptions and practical actions for the green Silk Road Initiative?

Therefore, our project is a green Silk Road practice project, which is not only limited to China in Asia, but also includes Kenya in Africa and France in Europe. Specifically, the project will be carried out for Tibetan women in the eastern Himalayas of Yunnan Province, urban women living in informal settlement in Kenya, and Chinese women in the Chinese community of Paris in France. Based on the green Silk Road activities, our work aims to build a better planet, and ecological civilization is the light of wisdom for conserving biodiversity and adapting to climate change!

Dr. Yin Lun: Climate change is increasingly affecting the women of indigenous people and local community around the world, like Tibetan women, living in the northwest of Yunnan province and the eastern Himalaya of China are also facing this challenge. And because the livelihood depends on local natural resources, Tibetan women have rich traditional knowledge related to biodiversity.

At the same time, there exist a traditional Tibetan women organization in the local villages, called the “sisterhood”, this organization has long been in the local community, has a long history, and is still very influential today, and has its own strict customary law. Since 2016, with the support of our project team, as well as a number of capacity-building and institutional training activities, the Tibetan women sisterhood began a series of actions to protect biodiversity and cope with climate change, finally the community-based conservation and adaptation plan is formed based on traditional knowledge. The activities of Tibetan women sisterhood are including the following parts:

1.The knowledge for traditional use of agricultural bio-species and genetic resources;

2.The knowledge for traditional use of medicinal bio-species;

3.Traditional technical innovations for bio-resource use and traditional practices for farming and living styles;

4.Traditional cultures such as customary laws and community protocols that are related to conservation and sustainable use of bio-resources;

Third Part: Based on the classification of the traditional knowledge, with the support of our project team and scientific experts, the local Tibetan women began to develop a community-based biodiversity conservation plan for climate change, and conducted action research to adapt the climate change.

The traditional knowledge can improve understanding of the influence of climate change to biodiversity, and provide ideas to develop an equitable and effective biodiversity conservation plan to adapt the climate change. For the Tibetan women, compare with the externally driven adaption options, they are more willing to take the community-based biodiversity conservation plan, because such a plan will enable them to apply their traditional knowledge according to the geographical location and environment of their areas, so that their actions to adapt to climate change will be more effective.

You May Like
Propping up Platforms
Do Sanctions Really Work?
Malawi’s 2063 Agenda Gets ICT Boost
A Partnership of Resilience
Stronger Local Support for Foreign-Funded R&D Centers
A Lively Central Axis
Bringing Heritage to Life in the Modern Era
Medical Care for the Young
Use Wechat scan the qrcode, then share to friend or feed.