【High-level Interview】Masahiro Kawai: How Has Japan Embraced the Belt and Road Initiative？

“China is providing an alternative way of globalizing many developing countries which is different from what the U.S. has been doing.” 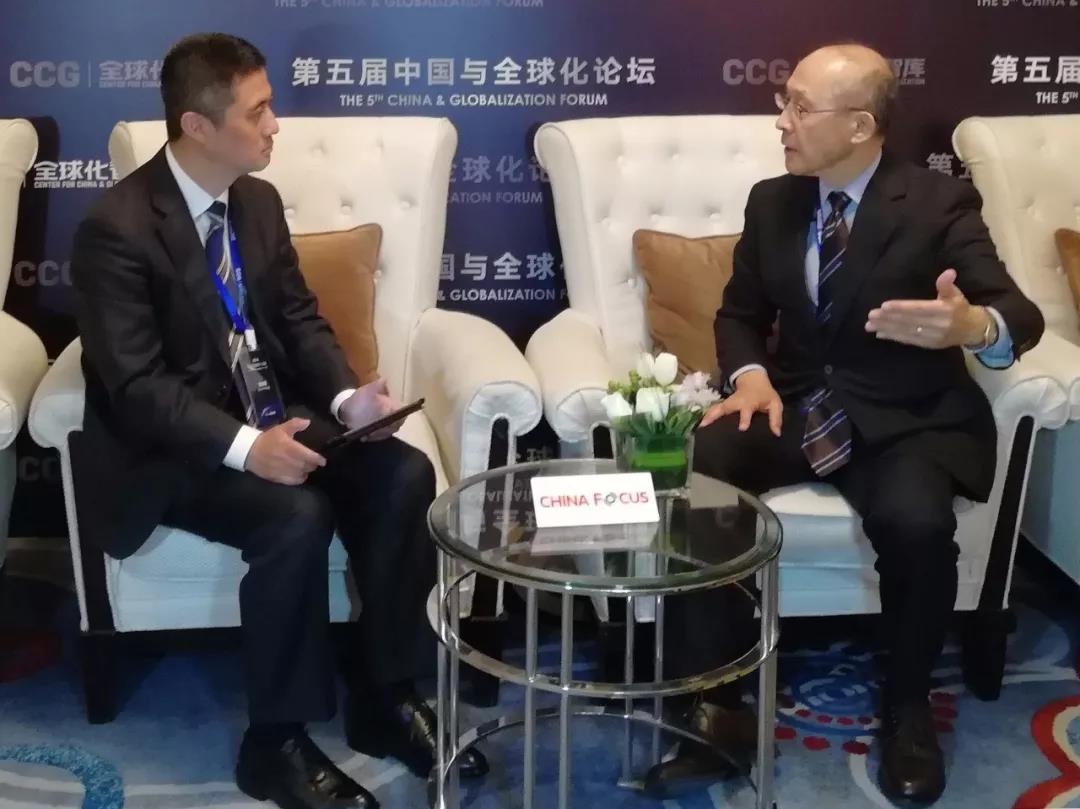 ▲Gao Anming and Masahiro Kawai (R), Specially Appointed Professor at the School of Public Policy at the University of Tokyo, Representative Director and Director- General of the Economic Research Institute for Northeast Asia, and former Dean of the Asian Development Bank Institute, exchange views on topics such as the Japanese government’s position on the Belt and Road Initiative at the 5th China and Globalization Forum in Beijing on April 14, 2019.

Interviewee: Masahiro Kawai，Specially Appointed Professor at the School of Public Policy at the University of Tokyo, Representative Director and Director-General of the Economic Research Institute for Northeast Asia, and former Dean of the Asian Development Bank Institute

Gao Anming: What do you think has been the impact of the Belt and Road Initiative on the world? The theme of this forum (5th China and Globalization Forum) is globalization and someone mentioned that the BRI could act as one of the platforms for globalization 4.0. What is your view on that?

Masahiro Kawai: I agree with that view. China is providing an alternative way of globalizing many developing countries which is different from what the U.S. has been doing. In the period immediately after World War Two, the U.S. provided the Marshall Plan, which was used for infrastructure reconstruction in Europe.

The U.S. in the early period, provided a lot of money for reconstruction and infrastructure rebuilding. But recently, the U.S. has not been spending as much money for that purpose, rather, it has been promoting trade liberalization, investment liberalization, and financial liberalization bilaterally, regionally, and multilaterally through the WTO, the IMF (International Monetary Fund), the World Bank and so forth.

So that’s been the form of globalization led by the U.S. Of course, the advancement of IT and the expansion of cross-border activities by multinational corporations from the U.S., Europe and Japan have also pushed globalization. China’s push for globalization is different by providing infrastructure construction, financing and connectivity and then promoting trade and investment. So that’s an alternative way of globalizing the world.

Gao Anming：I’d like to ask your view about the Belt and Road Initiative (BRI). How would you evaluate the Initiative and in particular, the infrastructure construction that has since taken place?

China has made a large, positive contribution in this sense. Many developing countries were very excited about the Belt and Road Initiative in the early years, from 2013 up to maybe 2016 or so.

And then from around 2017 onwards, several countries realized that perhaps a better approach could be found. Although China finances a lot of infrastructure projects, the local economy of BRI countries’ may not be benefiting much from infrastructure construction because Chinese workers come to the country to do the construction work and Chinese products, machines and construction materials and so forth are imported from China, rather than being purchased from local economies.

Some countries have started to realize that the value added to their local economy from BRI projects may be limited. So that’s something those countries want to see change, like the recent renegotiation between Malaysia and China on the railways; cutting the cost and providing more benefits to the local economy.

Gao Anming：In your view, what do you think were the motivations behind President Xi Jinping’s proposal for the Belt and Road Initiative in 2013?

One is that China became the second largest economy globally in 2010. So, President Xi Jinping wanted China to exercise greater leadership in the global economy.

And second is that the infrastructure business is one of the most advanced areas in China. China is very efficient, very quick and has created a very solid infrastructure sector. I’m sure President Xi Jinping knew it and by focusing on the infrastructure area, China would become a big global player.

There were also a lot of domestic considerations for the BRI and perhaps as the second largest economy, China wanted to expand its political clout, expand the geographical area where China’s economic and political presence is much more seriously felt than before.

Gao Anming: The Belt and Road Initiative has been in place for over five years now. How would you evaluate the implementation of it overall?

Masahiro Kawai: As I said, it’s been positive and we have to give credit to President Xi Jinping and the Chinese government for this great achievement. But at the same time, there has been some push back as some countries have found difficulties and problems. So, I think China wants to become flexible in adjusting the way in which BRI projects are implemented in various countries.

Gao Anming：How would you analyze the Japanese attitude or policies towards the BRI, from government, businesses, or think tank’s perspectives?

Masahiro Kawai：From the government’s point of view, initially, the Japanese government did not react positively or negatively to the BRI. But starting in 2017, Shinzo Abe’s administration started to support the concept of BRI under certain conditions and under certain principles.

Then, Prime Minister Abe decided to work with the Chinese government on joint projects in third countries. That is how Japan has viewed the BRI; initially there was no interest, no attention, and no visible reaction, and then Japan become more positive towards the BRI.

But by 2017 several problems associated with BRI projects had surfaced. Reflecting these problems, the Japanese government emphasized the importance of several principles such as the economic viability of the BRI projects, the openness for everybody who uses its infrastructure facilities, transparency on procurement and other issues, and fiscal and debt sustainability of the BRI borrowing countries.

So overall the four principles are key; economic viability, openness, transparency and debt sustainability. I’m sure the Chinese government would agree, because the Asian Infrastructure Investment Bank (AIIB) is taking precisely those principles. From this perspective, AIIB, in my view, has been very successful. The BRI should look at how AIIB is delivering various projects. I think AIIB is providing a good lesson to the BRI.

You May Like
Will the World Economy Return to Normal Soon?
China Pledges to Support SMEs and Guarantee People’s Livelihood
Will the Post-Epidemic Economic Recovery Affect China’s Environment Governance?
The Recipe of China’s Massive Economic Rebound
The Hidden Hand Behind US Anti-Lockdown Protests
Thrive Not Survive: Why China’s Stimulus Package is Different This Time
To Be or Not to Be United
The Battle Against Coronavirus Promotes China-Japan Relations
Use Wechat scan the qrcode, then share to friend or feed.