Highlights of China’s Diplomacy in the Post-Pandemic World

It is a period when the EU is reassessing its relationship with China—both sides have their own differences with the U.S. Brussels can play a crucial role as a major mediating power in a world marked by increasing multipolarity and the U.S.-instigated trade frictions.

Despite the encouraging news that vaccines may be on the way, the novel coronavirus disease (COVID-19) pandemic has had a profound and lasting impact on the international community. It has increased economic uncertainty and geopolitical frictions while highlighting the shortcomings of global governance at a time when transnational challenges are more evident than ever. Yet the unprecedented changes we are witnessing also bring opportunities for China’s development and global integration.

The Fifth Plenum of the 19th Communist Party of China Central Committee, held at the end of October, gave an early glimpse into China’s plans to help shape a more peaceful and prosperous post-pandemic world. The meeting set guidelines for China’s forthcoming 14th Five-Year-Plan (2021-25) as well as a long-term goal—2035 Vision. While five-year plans primarily focus on domestic goals for economic and social development, the proposals also reaffirm China’s commitment to continuing the nation’s opening up and creating a sound external environment for development.

Doing so requires taking efforts both close to and far away from China, covering emerging and industrialized countries alike. It will span all spheres of international cooperation, from diplomacy and free trade promotion to infrastructure and strengthening global governance.

On top of the list is deepening relations with neighbors in Asia, which already accounts for 60 percent of global growth and will only gain greater importance as it recovers fast from COVID-19. The continent is increasingly bound together through global value chains, free trade agreements, and the Belt and Road Initiative. Data released in July 2020 by the Asian Development Bank showed that intra-regional trade makes up 58 percent of Asian countries’ total foreign trade currently, up from 45.2 percent in 2000.

Nowhere is this integration more evident than in China’s ties with the Association of Southeast Asian Nations (ASEAN), which in the first half of 2020 surpassed the EU to become China’s largest trading partner. Links to Southeast Asia are set to deepen with the signing of the Regional Comprehensive Economic Partnership (RCEP), a free trade agreement (FTA) between the 10 ASEAN member states and China, Japan, the Republic of Korea, Australia, and New Zealand. As Chinese Premier Li Keqiang remarked, the signing of the RCEP is “not only a landmark achievement for East Asian regional cooperation, but also a victory of multilateralism and free trade.” By reducing tariffs and non-tariff barriers, the RCEP will be a catalyst for Asia’s integration and help solidify multilateralism at a time when trade frictions and protectionism are on the rise elsewhere.

Moving to the other end of the Eurasian landmass, over the next five years, China’s ties with the EU will take on yet greater significance in a changing geopolitical context. It is a period when the EU is reassessing its relationship with China—both sides have their own differences with the U.S. Brussels can play a crucial role as a major mediating power in a world marked by increasing multipolarity and the U.S.-instigated trade frictions.

High on the agenda is signing the China-EU Comprehensive Agreement on Investment (CAI) and opening the China-EU Free Trade Agreement negotiations in a timely manner. Given China and the EU’s deeply entwined economic interests, enhanced policy coordination and confidence-boosting economic agreements would be of great mutual benefit, particularly amid a global downturn from COVID-19.

Brussels can also play a mediating role in the China-EU-U.S. triangle. The U.S. and EU are traditional allies, but this transatlantic relationship has suffered under President Donald Trump’s America First policy, which has frequently undermined its European allies’ interests. Amid rising China-U.S. competition, the EU can act as a bridge to help stabilize international order.

As a central voice in Europe that enjoys strong ties with both China and the U.S., Germany in particular is well-placed to help the EU reconcile China-U.S. relations, creating space for dialogue and cooperation to help the two sides avoid falling into an enduring Cold War-like confrontation. 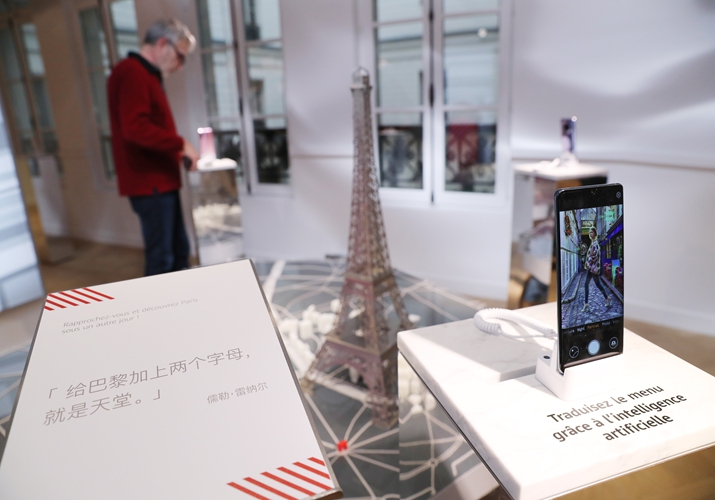 Huawei’s first flagship store in France, which opened in the nation’s capital of Paris, on March 5(XINHUA)

Moving south from Europe, the 14th Five-Year Plan period will see China continue to forge ties across Africa, a continent with enormous potential yet also with considerable infrastructural and industrial bottlenecks that have previously hindered its development.

Under the old model of international specification of labor, for a long time, African economies had tended to be stuck at the lower ends of global value chains due to insufficient funding and lack of technical support. In recent decades, local dynamism, together with increased foreign investment and cooperation, has helped to catalyze the transformation of African economies. Amid the wave of digitalization, more firms are adopting globalization strategies which target the African market. The continent holds great potential for development and is expected to grow into the next “factory of the world.”

China and Africa share a huge potential for cooperation as the two differ in terms of comparative advantages and levels of industrialization. China’s trade with Africa increased 20-fold from $10 billion in 2000 to some $207 billion in 2019 under the framework of the Forum on China-Africa Cooperation and the Belt and Road Initiative. Over 3,700 Chinese enterprises have invested and started businesses across Africa, providing a strong driving force for sustained regional economic growth. The FTA signed between China and Mauritius in October 2019 was China’s first FTA with an African nation. As the Africa Continental Free Trade Area develops, China can launch FTA negotiations with more African countries, and even explore a deal with the African Union.

In the context of current Sino-U.S. tensions, exploring new markets in Africa opens promising opportunities for Chinese enterprises, despite various challenges such as lack of deep knowledge and understanding of local realities and gaps in terms of infrastructure and professionals. Overcoming these obstacles requires that governments, enterprises, and industry associations cooperate to build more platforms and launch supporting policies.

China should seek to establish more partnerships and “multilateralize” the Belt and Road Initiative, which covers all three regions discussed as well as those further afield. Incorporating the initiative under the UN’s framework of governance can be part of these efforts. The UN faces challenges of its own and the need to reinvigorate the organization has been highlighted by its struggle to mount a collective response amid the pandemic. The Belt and Road Initiative is a useful vehicle to help achieve this, being well aligned with the UN’s 2030 Agenda for Sustainable Development. There are more than 130 countries and international organizations participating in the initiative. Coordination could be enhanced by a Belt and Road Initiative-oriented agency established under the UN structure.

International cooperation has suffered in recent years under the weight of populism, protectionism and now the pandemic. As President Xi Jinping said, “We need to build trust rather than second-guess each other; we need to join hands rather than throw punches at each other; and we need to consult rather than slander each other.” Hopes for COVID-19 vaccines raise the prospect of opening a new, brighter chapter for the post-pandemic world, but there is still much work to be done.

To achieve the goals set by the 14th Five-Year Plan, China needs to work more closely with partners in Asia, Europe, Africa, and beyond.