Innovation Should Be Given Priority in China’s Modernization Drive

Sci-tech innovation should be open and cooperative. Today, elements that drive innovation such as knowledge, talent, information, capital and technological resources, have broken through national borders and flowed globally.

The Party leadership’s proposals for formulating the 14th Five-Year Plan (2021-25) as well as the long-term objectives through 2035 adopted at the Fifth Plenary Session of the 19th Communist Party of China (CPC) Central Committee in October underline the need to give priority to innovation in China’s modernization drive. The document also called for achieving self-independence and making China more competitive in science and technology.

This marks the first time the CPC put innovation at the top of the agenda during the formulation of five-year plans.

Self-reliance and independent innovation have long been the focus for sci-tech development. The emphasis given to innovation at the plenum is consistent with previous pledges to pursue technological progress. The plenum also clarified how innovation is relevant today and what it means for China in the years to come.

The proposals said the world today is undergoing changes unseen in a century and the balance of international forces is subject to profound adjustment. A new round of sci-tech revolution is gaining momentum. It’s important to recognize the new challenges in the complex global environment and develop an eye for finding opportunities while detecting risks. Self-dependence will play a decisive role in attaining breakthroughs in key and core technologies and propelling China among the top innovating countries by 2035. 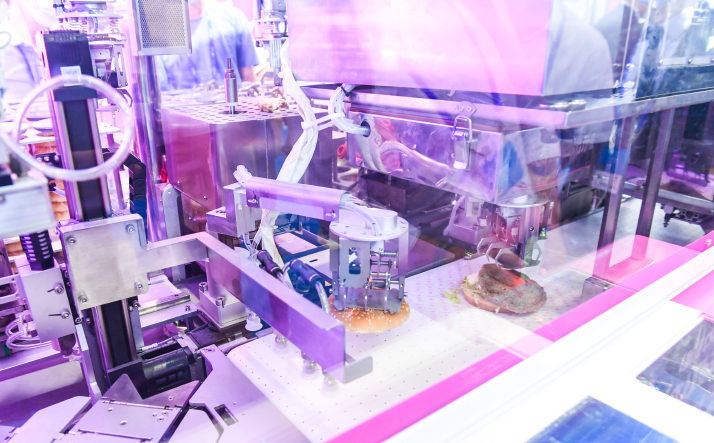 A hamburger-making robot on display at the China Hi-Tech Fair in Shenzhen, Guangdong Province in south China, on November 11 (XINHUA)

Up on the value chain

Since reform and opening up began in 1978, especially after joining the World Trade Organization in 2001, China has cooperated with other countries with its comparative advantages in labor and resources, speedily integrating into globalization. However, as these strengths ebb away, the traditional way of development is becoming hard to sustain.

At the 18th CPC National Congress in 2012, an innovation-driven development strategy was proposed. During the 19th CPC National Congress in 2017, it was decided that innovation would be the primary driving force behind development. Through continuous learning and accumulating experience, China has improved its capacity to think out of the box and climbed up on the international value chain.

With China’s industrial upgrading, the competition with the United States has become increasingly fierce. At a time when the new technological revolution is booming, science and technology have become the dominant force in reshaping the global landscape of competition.

The information technology industry is the cornerstone of an intelligent society and a key field for countries to compete in sci-tech activities in the future. It will become an engine for future technologies.

When the U.S. launched a trade war against China in 2018, it claimed the restrictive measures were meant to reduce the former’s huge trade deficit with the latter. However, the underlying reason is that the U.S. has begun to regard a rising China as its strategic competitor.

The scope of U.S. sanctions against China has expanded from trade to science and technology, putting Chinese hi-tech enterprises and universities on the so-called “entity list” that comprises organizations and individuals considered to be a significant risk to U.S. foreign policy and security.

The changes in the international competition scenario highlight the importance of self-reliance in science and technology.

In 2019, China’s research and development (R&D) investment exceeded 2 trillion yuan ($303.2 billion), second only to the United States’. It accounted for 2.19 percent of the GDP, reaching the average level of EU member countries, according to the Ministry of Science and Technology.

Enterprises have become the main players with their R&D investment accounting for 77 percent of the total, and a number of internationally renowned innovative companies have emerged. China’s output of research papers and the number of granted invention patents rank first in the world.

However, there is still room for improvement. The proportion of basic research remains low, only 6 percent of the total R&D expenditure. The structure of investment needs to be optimized. The citation rate of research papers is low, which indicates a lack of high quality.

The manufacturing industry is large but not strong enough in terms of abilities to make breakthroughs. There is high dependence on foreign sources for core technologies and high-end equipment; China is still at the middle and low end of the value chain.

Against this backdrop, it’s of great importance to improve innovation capacity and competitiveness.

In future international specialization and competition, it’s critical for China to achieve technological self-reliance fast to lead the new round of technological revolution.

Strategic sci-tech capabilities need to be strengthened. In areas of strategic importance associated with the country’s long-term development, it’s crucial to build a group of national laboratories to enhance indigenous innovation. Also, world-class universities need to be built. There should be forward-looking plans on basic research and the development of cutting-edge technology.

It’s also important to build sci-tech infrastructure clusters, giving priority to the development of multidisciplinary platforms that can address the choking points blocking technological advancement and social and economic development. Innovative platforms such as national research centers, major laboratories and technological R&D centers should be integrated.

A corporate-based industrial innovation system is needed. The government should establish innovation centers in collaboration with innovative enterprises to encourage them to increase investment in applied basic research and leading-edge technology development.

The goal is to put in place an industrial innovation chain led by enterprises with the participation of universities and research institutes to ensure technologies in strategic areas are reliable.

Besides, skill-oriented universities are needed to enhance vocational education and nurture high-skilled personnel for industrial development. The scientific research evaluation system is subject to reform, and interdisciplinary research will be encouraged to promote original research.

It’s of great importance to build an efficient and collaborative innovation governance system. The government should play the guiding role, with multiple players participating, including scientists, entrepreneurs, and the public. The state, enterprises and the society should each perform their duties and cooperate closely.

It’s also feasible to build a national sci-tech decision-making mechanism, giving full play to the role of innovation advisory committees, think tanks and representatives from all walks of life. Reform of the administrative system should be deepened to streamline government supervision over research. The government should also synergize its policies on innovation with industrial, trade, competition and education policies.

Sci-tech innovation should be open and cooperative. Today, elements that drive innovation such as knowledge, talent, information, capital and technological resources, have broken through national borders and flowed globally.

Therefore China will by no means close its doors to achieve technological self-reliance. It will continue to strengthen exchanges with countries around the world, make effective use of global resources and markets, and establish a policy environment compatible with international rules.

The author is a researcher with the Institutes of Science and Development, Chinese Academy of Sciences

You May Like
Metro Train Lahore, a Gift from China
Challenges for the G20 in Overcoming the Pandemic
Let the Voices of the Young be Heard
Blazing the Way
Highlights of China’s Diplomacy in the Post-Pandemic World
Signing of RCEP a Victory for Free Trade
An Analysis of Joe Biden’s Promised Foreign Policy to Understand Future China-U.S. Relations and Beyond
As Predicted, Biden Wins, Trump Attacks, the U.S. Risks Greater Crises
Use Wechat scan the qrcode, then share to friend or feed.