【High-level Interview】Justin Vaïsse: The Belt and Road has Improved Interconnectivity Among Countries

The BRI is a very positive development but it should really keep in mind that we need these norms of transparency, good governance and we should abide by these international principles so as to make them a real win-win situation. 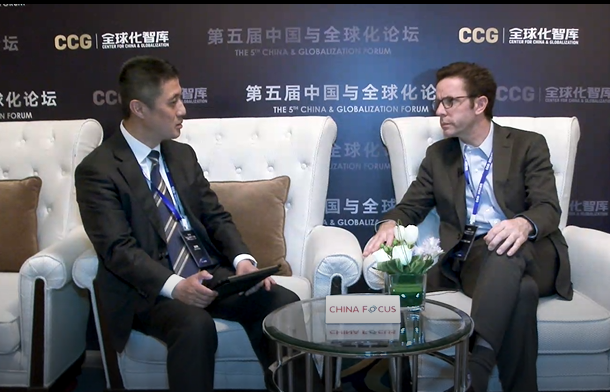 Gao Anming and Justin Vaïsse (R), Director General of the Paris Peace Forum, exchange views on topics such as the French government’s position on the Belt and Road Initiative, how the Belt and Road has improved interconnectivity among countries through infrastructure building, and the importance of a “green” Belt and Road at the 5th China and Globalization Forum in Beijing on April 14, 2019. 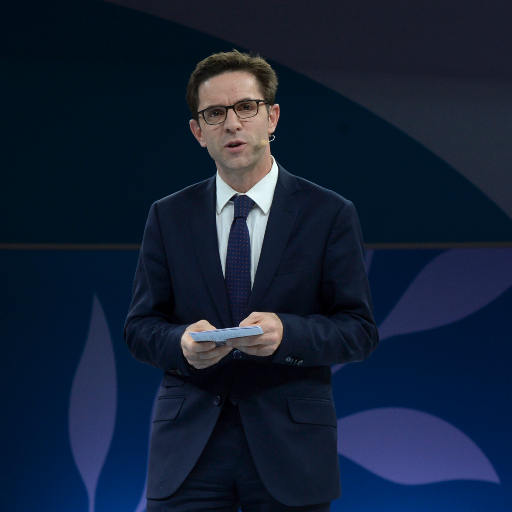 Justin Vaïsse: First of all, and I would place my steps behind those of President Macron a year ago in Xi’an when he delivered a speech on French-Chinese relations and in particular on the BRI and say that the first reaction was to welcome it as a very positive development for connectivity. This said, we’ve had many instances in the past of countries cooperating with each other, helping each other and that needs to be done with a few considerations in mind in order to have only positive development.

Among these principles or ideas, there is the fact that the Belt and Road Initiative, first, should be green. That is to say they should keep in mind the imperative we have to fight climate change and it is a war that we are losing right now. The second thing is that there should be two-way roads, not just a one-way street. The BRI should not only be meant to export capital and goods and infrastructure to other countries but also to bring imports and other things to China.

Lastly, it’s important that in any joint cooperation, we keep in mind the norms, principles, and standards that have been established over the years by many countries helping other countries in order to avoid, for example, excessive debt. That’s an important point. Otherwise we would find ourselves back in the situation of the 1980s when we had a big debt crisis, largely done by the West and that took a lot of time to solve. So that’s really important. Of course, countries can get into the dependency of the creditor, because of the excessive debt that they contracted. So, norms and standards in terms of debt, in terms of transparency are important.

To summarize, the BRI is a very positive development but it should really keep in mind that we need these norms of transparency, good governance and we should abide by these international principles so as to make them a real win-win situation.

Gao Anming: What do you think has been the impact of the BRI since it was proposed by President Xi Jinping in 2013? What is your general view of its impact?

Justin Vaïsse: I think it has had two impacts. The first one is some of the projects are really starting to create effects in terms of connectivity, in terms of linking countries to one another, especially in some regions in Central Asia and elsewhere and that’s important. We also, as the second effect, took the measure of the importance that China is now playing in world affairs and I think that was also a very positive development.

I would add one footnote which is that we are also seeing the need to fine-tune some of these initiatives. There has been diverse reaction in some countries from Malaysia to the Maldives, for example, pointing precisely to the need to think through the principles, norms and practices on which the Belt and Road Initiative will be built.

Gao Anming: Besides the problem you just mentioned, what do you think are the sustainability issues concerning the BRI and how would you propose China tackle these issues?

Justin Vaïsse：I see two main issues. One is financial sustainability and it’s really important because many of these countries do not necessarily have the necessary resources to afford taking on big loans. So, it’s really important to respect the ratio of debt over GDP (Gross Domestic Product) that they can really absorb.

The second aspect is environmental sustainability. Here it’s really important to keep in mind that we don’t really have a choice, that this is not some sort of luxury that we can give ourselves by saying “I will respect the maxim level of CO2 emissions”. We need to incorporate CO2 emissions into all the infrastructure projects that we do, especially in the sector of energy.

So, we should double our efforts to make sure that we stop using fire-coal plants and that we move to, at worst, natural gas and at best, renewable energy. It’s really important because over the medium and long term, if we live in a hotter and hotter, warmer climate then there’s really a big risk that everything we are doing in terms of development will be at stake.

Gao Anming: Two weeks ago, I was at the Boao Forum for Asia and one of the themes was globalization and the BRI. I remember that I attended a forum at which a representative from Italy explained why Italy and China signed a MOU (Memorandum of Understanding) on the BRI. What was interesting was that he said: “Italy would not be the only G7 country to forge closer cooperation with China on the BRI.” So, in your view, what will be the outcome for France and China on this connectivity issue regarding the BRI？

It should be done in keeping in mind that the EU has its own projects. EU Strategy on Connecting Europe and Asia in particular has lots of funds, lots of money invested in Central Asia and elsewhere, so we don’t really need to put ourselves in that framework of MOU to get good concrete cooperation on the ground.

You May Like
Safeguarding National Security: For a Better Tomorrow in Hong Kong
National Security Legislation for Hong Kong in the Light of International Law
The Two Sessions Shed Light on China’s Political System
Indian Scholar on Govt Work Report: Understanding China at a Special Time
Hong Kong Needs Law to Protect National Security
Trump’s Threat to Pull WHO Funding Will Isolate US
Dawn of a Civil Code Era
Acts Harming National Security Intolerable
Use Wechat scan the qrcode, then share to friend or feed.