In the recent past, China has developed a network of economic relations with not only the major powers, but also other nations in the world constituting the semi-periphery and periphery of the global economic system. As the Chinese economy grows, its list of trading partners has been expanded to include developing countries in Asia, Africa, Europe and other parts of the world. China’s trading relations with most countries has taken a dynamic role because of policy supports, geopolitics, geostrategy and other reasons, with African countries benefiting from various Chinese projects under the auspices of the Belt and Road Initiative.

Over the last three decades, China’s trade and economic relations with other countries, particularly Africa, has undergone tremendous development. It’s now the world’s largest economy in terms of purchasing power parity and an important trading partner globally. As part of ensuring that trade benefits accrue to both China and its trading partners, Chinese President Xi Jinping announced to delegates attending the Belt and Road Forum for International Cooperation in Beijing in May last year that China would host the China International Import Expo (CIIE) in November 2018 in Shanghai. The expo is aimed at further opening up the Chinese market to imports from other countries.

The expo will feature trade in goods and trade in services. The former will showcase high-end intelligent equipment, consumer electronics and appliances, automobile, apparel, accessories and consumer goods, food and agricultural products and medical care equipment. The latter will exhibit services in tourism, emerging technologies, culture and education, creative design and service outsourcing. Both sections cover a total area of 210,000 square meters with the section for trade in goods taking the lion’s share of space. This is a clear indication that China is committed to mutually beneficial cooperation with her trading partners. Xi has reiterated that the upcoming inaugural CIIE is not just an ordinary expo, but a major policy initiative and deliberate commitment by the government to further open up the Chinese market to imports from other countries, particularly from Africa.

In the past, China has been accused of importing raw materials from Africa for processing manufactured goods to sustain its high growth rate and diverse exports. But the advent of this expo has left an egg on the face of skeptics. Many would have expected Xi to keep his predecessors dictum of tao guang yang hui (lay low and bide your time), allowing China to hide its brightness and instead cultivate obscurity to fend-off Sinophobia – but far from it. China’s development under Xi has been bold and impressive, enabling the country to move from the periphery to the epicenter of the global economic system. The hosting of this expo will greatly demystify skeptics’ notions of a less symbiotic relationship and promote a conducive atmosphere for increased demand for foreign imports – particularly from Africa – by the Chinese. Others may ask, of what significance is CIIE to Africa? 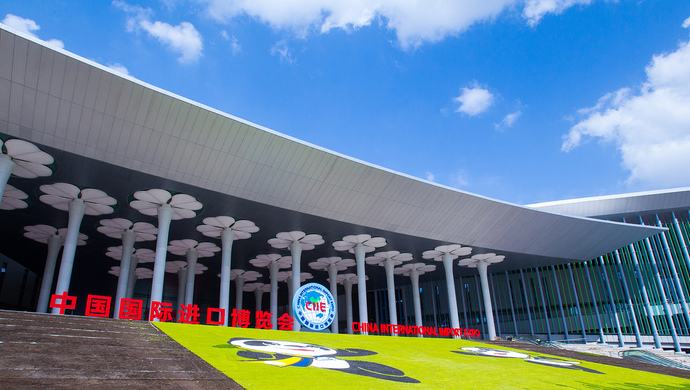 First, with trade between China and most African countries skewed toward Chinese exports rather than African exports, CIIE offers African countries an opportunity to tap into the Chinese imports market. For the last nine years, China has been Africa’s largest trading partner with trade volumes increasing annually to $170 billion in 2017, according to figures from the Ministry of Commerce of China. Even with this growth in China-Africa trade, African exports to China have not crossed the rubicon. In 2016, the largest exporter to China from Africa was Angola, followed by South Africa and the Republic of the Congo. During the same period, South Africa was the largest buyer of Chinese goods, followed by Egypt and Nigeria. So this expo gives African countries an opportunity to enter into the Chinese imports market hinged on a market of more than 1.3 billion people. As the world’s second largest economy, China offers African countries enormous potential for growth of consumption and imports. In the next five years, China will import products and services in excess of $10 trillion and as such, there is a need for African countries to pitch subtly at CIIE to increase demand for their exports in China.

Second, CIIE offers African countries an opportunity to network with the largest and most targeted gathering of executives, decision makers and key importers from China and beyond. African exporters will be able to establish their brands in China by launching products or demonstrations to targeted clientele through target marketing of their products. Therefore, CIIE puts African exporters in an advantageous position to build new business relationships with global importers and thus augment efforts to penetrate and gain competitive edge in international markets.

Third, CIIE offers African countries an opportunity for technological transfer to boost local production. This will be facilitated by the variety of products on display, numerous new products and technologies exhibited by enterprises from more than 130 countries from across the world. African countries will learn about technological innovation and industrial upgrading that will increase goods and services for export to China and hence reduce the existing trade deficit. The trade in goods such as high-end intelligent equipment, consumer electronics and appliances, automobile, apparel, medical equipment and food and agricultural products provides a good platform to pitch for foreign direct investment that will promote value-addition on domestic goods, enabling African countries to trade more among themselves.

Fourth, by participating in CIIE, African countries will learn and understand the need to make customer-focused products designed to meet the ordinary consumer needs in foreign markets. Most Chinese products are designed to meet customer needs in foreign markets, thus making it easier for a country to earn the required foreign exchange and reduce the trade imbalance.

Finally, trade in services, especially tourism, has emerged as the new growth frontier in the China-Africa relations. It’s therefore important for African exhibitors at CIIE to market African countries as tourist and holiday destinations. Currently, African countries such as Kenya, South Africa, Mauritius, Morocco, Egypt and Tanzania have emerged as the most competitive tourist destinations for the Chinese in Africa. With the Chinese Government offering to support exhibitors from poorer countries, there is already full commitment to harness mutual benefits that will take the China-Africa relations to the next level.

The writer is an economist, consultant and a regional commentator on trade and investment based in Nairobi, Kenya.

You May Like
Hong Kong Needs Law to Protect National Security
Trump’s Threat to Pull WHO Funding Will Isolate US
Dawn of a Civil Code Era
Acts Harming National Security Intolerable
Two Sessions signal China returns to normalcy
Shanghai Working for Post-Pandemic Economic Recovery
A Port City’s Quick Response to COVID-19
The Civil Actors’ Role in China’s COVID-19 Response Were Overlooked…
Use Wechat scan the qrcode, then share to friend or feed.