The murder of 11 people at a Pittsburgh synagogue on October 27 was perhaps the worst case of violence ever perpetrated against the Jewish community in the United States. This incident of anti-Semitic violence followed just a few days the incident of the pipe-bombs sent in the mail to a handful of Democratic politicians and Democratic fund-raisers, including former President Barak Obama and Vice President Joseph Biden. This outbreak of unusual violence has certainly raised the political temperature in the nation as we approach a very important mid-term election. 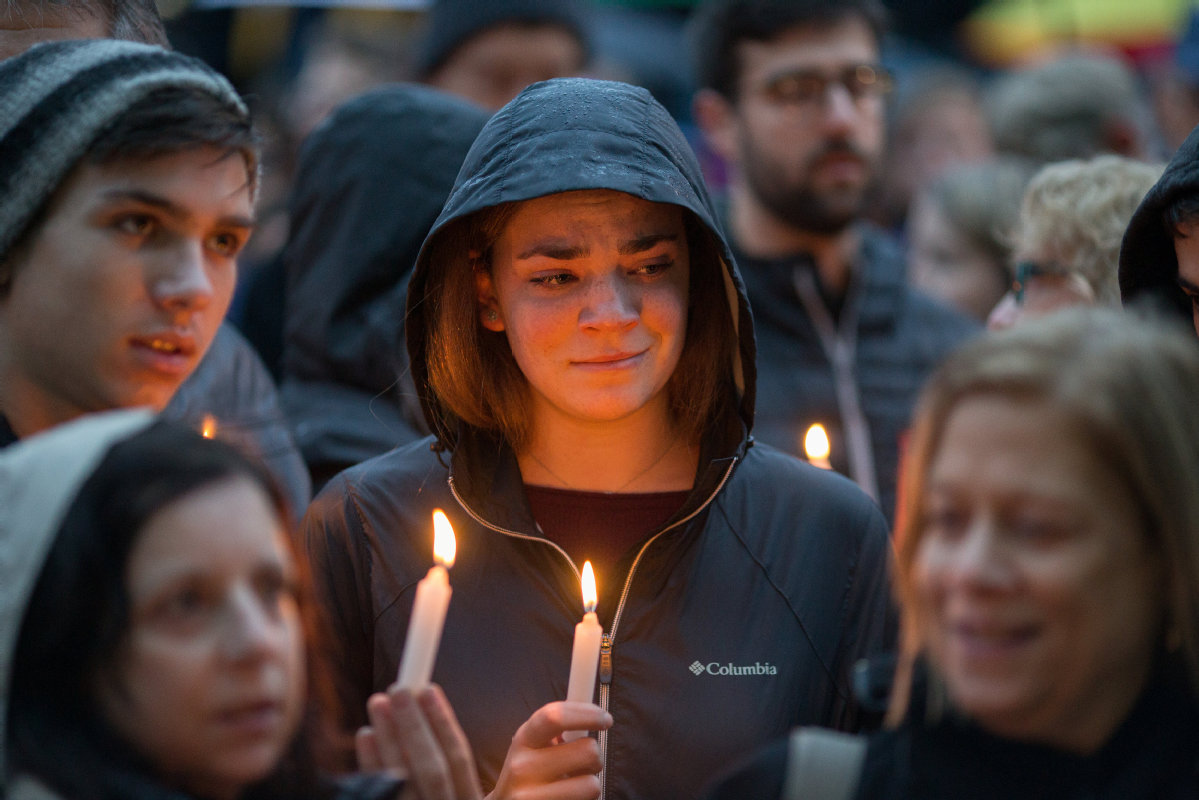 Δ People mourn as they hold a vigil for the victims of the synagogue shooting in Pittsburgh, Pennsylvania, on Oct. 27. John Altorfer/REUTERS

Democrats immediately began to blame the up-tick in the violence on President Trump’s volatile rhetoric. The President, in turn, blamed it on the strident and perennial attacks on him by the media and by the Democrats ever since he won the Presidency. In a sense, both are correct. But the growing bitterness in the political debate and the increased violence on the streets of the nations are in fact linked to a deeper malaise, the increasing polarization and disillusionment in the body politic.

The election of President Trump is a prime example of this. A majority of the electorate ignored ALL of the establishment candidates, securing for Trump first, the Republican nomination over the well-known political figures, like Jeb Bush who were running against him, and then the Presidency itself, defeating Hillary Clinton, whom the media had already crowned President-elect – until she wasn’t. The continued languorous effects of the 2008 financial crisis, in which Wall Street, and NOT Main Street, was bailed out, the widening gap between rich and poor, and the abysmal failure of elected officials to remember the promises they had made on the campaign trail, created a feeling among the general public that their political leaders in Washington were not dealing with the problems facing the people who had sent them there. 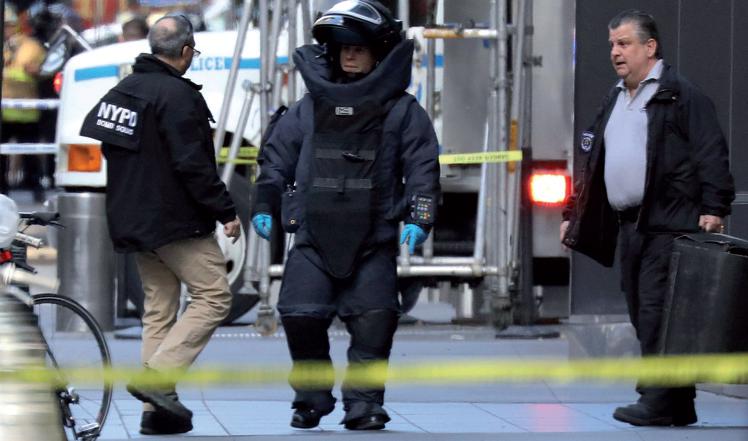 Δ A member of the New York Police Department bomb squad is pictured outside the Time Warner Center in New York after a suspicious package was found inside the CNN Headquarters in Manhattan on Wednesday.

Donald Trump, who had never held political office, but seemed to have had some success (as well as some failures) in real estate, looked like the kind of guy who could take on the Washington political establishment. He was going to revive the U.S. economy, rebuild America’s infrastructure, end the many wars the U.S. was engaged in, and get along with other countries, including Russia and China. And yet now his tariffs on China are taking their toll on U.S. production while more troops have been sent to the Middle East and to Afghanistan, and the much-touted infrastructure program is still awaiting funding. So the jury is still out on all of the important issues he raised in his campaign, and much of it seems to be still-born. That, and his fiery rhetoric, which often targets immigrants and refugees and other poor victims of the economic and political crisis for cheap political gains, has tended to turn people off to his more sane proposals.

But President Trump has never been granted the usual “honeymoon” period traditionally given a new president by the opposing party, which would allow him at least to try to launch some of his programs. From the beginning, there was the Mueller investigation trying to build a case for Russian involvement in the 2016 election, with the intent of calling into question the very legitimacy of Trump’s victory. And rather than retiring silently as former presidents generally due, former President Barack Obama set up shop several blocks from the White House as an alternative center of power for the Democrats to rally around. And few Democrats were willing to work with Trump on legislation. When he tried to work out some agreement with Vladimir Putin in Helsinki, the Washington political establishment jumped all over him virtually declaring him a traitor to his country. And the U.S. media, which is largely Democratic as a rule, also used its own influence to keep up the pressure on the President and to prevent the general public from learning anything positive about what he was doing. And Trump, being Trump, then lashed out in all directions.

The upcoming mid-term elections will tell the tale of what effect all of this has had on the electorate. Under ordinary circumstances, the party in power suffers losses in the first mid-term election. Just being in power, and not getting everything done that had been promised in the campaign leads to a certain disillusionment among the voters. But the tensions now prevailing, fueled also by the recent letter-bombs and the synagogue murders, could have a much bigger effect than under ordinary circumstances. 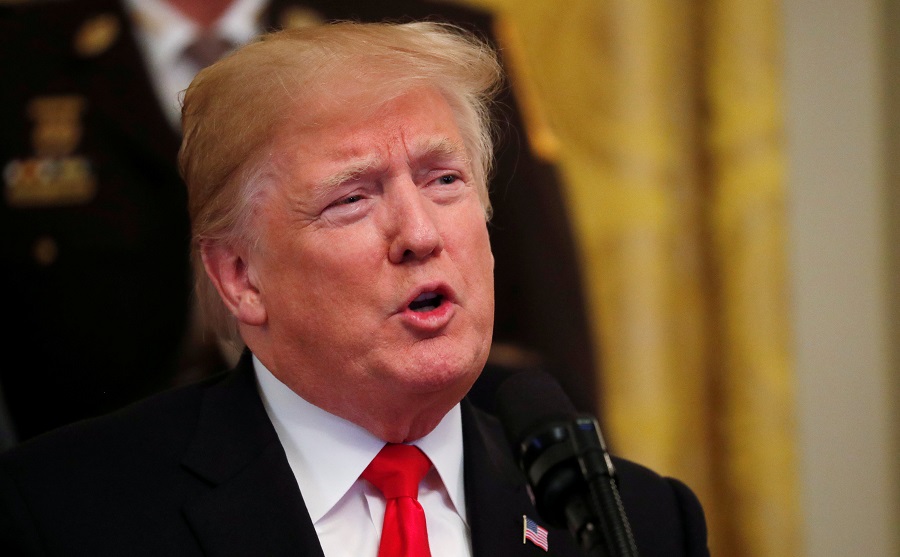 Δ President Donald Trump speaks about the apparent pipe bombs sent in packages addressed to Democratic political figures and former CIA Director John Brennan at CNN during an event in the East Room of the White House on administration efforts to “combat the opioid crisis” in Washington, October 24.

The Democrats will continue to blame Trump and his rhetoric for the increased violence, although the number of attacks, including those from the far right have been on the increase since 2007, starting nine years before Donald Trump’s election. And the “caravan” of immigrants which is heading toward the US-Mexican border just in time to cause appropriate havoc before the elections is also heavily supported by Democratic fund-raiser George Soros. Given this situation, it is likely that the Republicans will lose their House majority. House elections are much more frequent and volatile, and more dependent on the temporary swings in public mood than Senate elections. The Republicans will probably hold on to their slight majority in the Senate, of which only one-third of the seats are up for re-election this year.

What happens to the country then with a shift in the House? Much will depend on the attitude of the leadership of the Democratic Party. If they are insistent in trying to launch an impeachment procedure against President Trump as many have indicated, we are in for two more years of total political gridlock and chaos. On the other hand, a Democratic House may be willing to work with the President on issues of concern to them, like infrastructure and job creation. If a Democratic House starts looking like a lynch-mob, this could doom any chances they hope to have come the next presidential election. But if they are willing to cooperate with Trump, and the President himself understands the opportunity this gives him in getting some of his program accomplished, this could be the means for starting to bring the country together around a common program. If not, and the President continues to focus on the divisive “wedge issues” like stopping immigration and building a wall on the border, the “disconnect” in American society will get even worse.

William Jones is the Washington Bureau Chief of Executive Intelligence Review and a non-resident fellow of the Chongyang Institute for Financial Studies at Renmin University.

William Jones is the Washington Bureau Chief of Executive Intelligence Review and a non-resident fellow of the Chongyang Institute for Financial Studies at Renmin University.
China’s Success in Fighting COVID-19 should be an Eye-Opener for the West
Chinese Success in Fighting COVID-19 Should Be a Lesson for the West
G20 Teleconference Creates New Opportunities
Mike Pompeo’s Crusade Targets US-based Chinese Journalists
Use Wechat scan the qrcode, then share to friend or feed.