Rural development plan for 2020 rolled out

In Shibadong Village in the central province of Hunan, President Xi Jinping first proposed the policy of targeted poverty alleviation in November 2013. The village shook off poverty in 2017 and is thriving by developing tourism and agriculture. Shi Jinlan, Deputy General Manager of Shibadong Rural Tourism Co. Ltd., told People’s Daily that in 2019, the village received 400,000 visitors. This was a drastic increase from 300,000 in 2018, when villagers saw their tourism revenue exceed 3 million yuan ($428,000).

Shibadong is just one of the many examples of China’s historic anti-poverty campaign. Liu Yongfu, head of the State Council Leading Group Office of Poverty Alleviation and Development, said at a recent conference that more than 10 million people and about 340 counties were expected to have risen above the poverty line in 2019.

The battle against poverty will not stop until complete victory is secured, according to the Central Rural Work Conference in Beijing on December 20-21, 2019.

The conference said China also made remarkable headway in improving the living standards of rural residents and ensuring stable grain production in 2019. In its to-do list for 2020, poverty alleviation and the improvement of people’s wellbeing are at the top of the agenda, with the aim to help the remaining poor population become well-off and prevent people from slipping back into poverty.

The key to the work related to agriculture, rural areas and rural people in the new year is to ensure the stable production and supply of important farm products, continue to increase rural residents’ income, reduce poverty and shore up weak points in rural infrastructure and public services, Han Changfu, Minister of Agriculture and Rural Affairs, told a press conference in Beijing on December 22, 2019.

Data from the National Bureau of Statistics (NBS) showed that the number of rural residents was 565 million in 2018, accounting for 40.42 percent of the Chinese population. This large rural population poses challenges to common prosperity while also bringing with it great growth potential. Rural development in 2020 is even more crucial for completing the scheduled goals, while mounting external challenges and downward economic pressure have added to the difficulties, Han said.

At the end of 2018, the number of impoverished rural residents in China stood at 16.6 million, with 13.86 million rural people rising above the poverty line of an annual income of 2,300 yuan ($328) for the year, the NBS said. With the aim of eliminating absolute poverty by 2020, China has made great efforts in reducing poverty and improving rural residents’ quality of life.

In the country’s poorest areas, including parts of Tibet and Xinjiang Uygur autonomous regions, and Sichuan, Yunnan and Gansu provinces, the registered poor population will have shrunk from 1.72 million in 2018 to about 430,000 by the end of 2019, with the poverty headcount ratio dropping from 8.2 percent to 2 percent in the same period, Liu said.

To improve self-reliance in poverty-stricken regions, the government has encouraged the development of industries with local characteristics and promoted sales of farm products to increase residents’ income in a sustainable manner.

Along with the poverty alleviation drive and expansion of the domestic job market boosted by industrial growth, the income sources of rural residents have been greatly diversified as many turn to the secondary and tertiary industries. NBS data showed that the number of rural workers was 288.36 million in 2018, with 172.66 million working in towns or cities.

A better life is already in view for an increasing number of rural residents. According to Han, their per-capita disposable income is expected to exceed 15,000 yuan ($2,140) in 2019, up 6.5 percent year on year.

However, there is still a long way to go in reducing poverty and narrowing the urban-rural income gap. The conference stressed the need to help the rest of the poor population shake off poverty, prevent them from slipping back into poverty and further improve rural residents’ income. “Comparative poverty remains to be addressed through long-term mechanisms,” Liu underscored.

According to Li Guoxiang, a researcher with the Rural Development Institute of the Chinese Academy of Social Sciences, industries such as tourism and production of specialty crops should be boosted to realize long-term and sustainable rural development. “Rural areas need to enhance the quality of local products and services to sharpen their edge,” he told Beijing Review.

However, an inadequate industrial chain and low value-added products remain hurdles for improving farmers’ income, Chen Yajun, Director of the Development Planning Department at the National Development and Reform Commission, told a forum in late December 2019.

To improve rural residents’ income through the primary industry, it is essential to promote the development of modern agriculture and integration among different industries, support individual households to expand agricultural production and make credit loans more accessible, Li said.

Efforts are also needed to ensure the basic living conditions of rural residents through expanding the coverage of the social safety net and provide them with more training to meet the demands of the secondary and tertiary industries, according to Li.

To address these issues, the conference said the government will roll out measures to ensure stable employment of rural residents, boost rural industries and encourage skilled workers to return to rural areas to set up businesses.

Agricultural production is closely related to food security and people’s wellbeing. According to Li, bumper harvests can not only help improve farmers’ income but also ensure sufficient agricultural supply to stabilize prices. The conference underlined the importance of keeping grain production stable and restoring hog production.

China’s total grain output has exceeded 650 million tons for five consecutive years. It reached a record high of 663.84 million tons in 2019, up 0.9 percent year on year.

While making notable progress in 2019, the grain production capacity still needs improvement, as some regions pay insufficient attention to the agricultural sector, Han said, highlighting that the grain output is supposed to remain above 650 billion kg in 2020, with total grain areas over 95 million hectares.

In addition, more supporting policies are needed to improve farmers’ income from crop planting and enhance their enthusiasm for production, Li said.

The prices of pork, a staple meat in China, have recently gone down after soaring under the influence of the African swine fever virus and cyclical factors. According to the conference, the hog supply needs to be boosted to ensure stable pork prices. “Since restoration of hog production and the development of modern animal husbandry will increase demand for corn, major corn producing areas also need to increase productivity,” Han explained.

Along with shoring up production, policymakers are also eyeing the better storage of agricultural products to ensure food security. As the conference highlighted, the government will continue to expand modern agricultural facilities and develop refrigerated logistics facilities for farm products.

In addition, the conference made plans for the improvement of land policies regarding the development of rural industries and the implementation of a pilot reform of the rural collective property rights system nationwide. The rights of rural residents over their contracted lands after settling in cities will be protected, Han said.

As NBS data showed, the Engel coefficient, the proportion of income spent on food, for China’s rural residents dropped considerably over the past decades and was at 30.1 percent in 2018, suggesting the upgrading demand of the rural population.

However, the urban-rural gap in infrastructure and public services remains large. The government is poised to improve the living environment, education, medical services, social security and cultural activities in rural areas, and give full play to the role of primary-level communities in maintaining a stable social order, according to the conference.

For a better living environment in rural areas, the government has prioritized toilet upgrading and the implementation of a garbage disposal system. In 2019, it invested 7 billion yuan ($1 billion) in building and renovating toilets in rural areas, aiming for 85 percent of local households to have access to sanitary toilets by 2020.

“Since many upgraded toilets have not yet been put into use, the drive needs to be advanced in 2020 to provide rural residents with more tangible benefits,” Li said.

According to Han, the proportion of villages launching clean-up campaigns and promoting sanitary toilets in 2019 was 90 percent and 60 percent, respectively. In the same period, a household garbage disposal system covered 84 percent of the villages throughout the country. 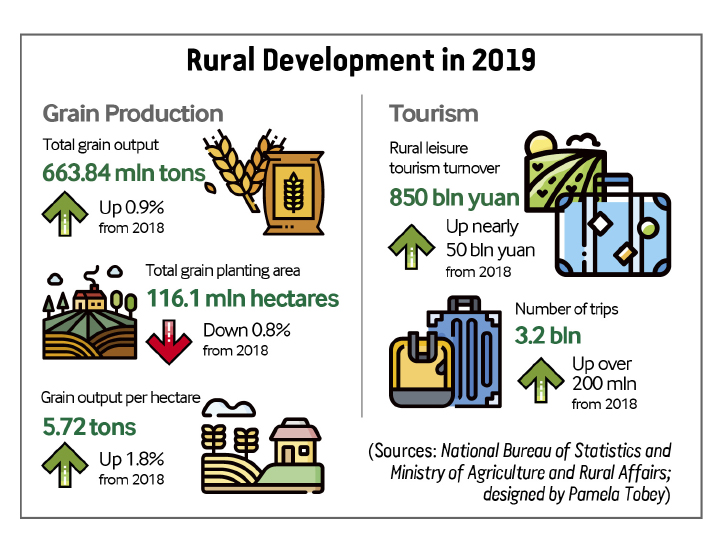 Due to the urbanization drive and the rising living standards of rural residents, the rural consumption market has seen considerable growth potential. According to the NBS, the per-capita rural consumption grew by an average annual rate of 5.2 percent to 12,124 yuan ($1,733) in 2018. Household consumption in rural areas has increased, with the average ownership of cars, computers and cellphones per 100 households reaching 22.3, 26.9 and 257, respectively, for the same year.

“The great potential of China’s rural consumption market remains to be further unleashed, led by the improvement of rural residents’ income,” Li said. Thanks to the expansion of Internet coverage and mobile phone use, rural residents are becoming more involved in online consumption and sales. A report released at the World Internet Conference held in October 2019 said rural China added over 3 million Internet users in the first half of the year.

Bridging the gap between sellers and buyers, e-commerce and live-streaming platforms have facilitated rural producers reaching urban buyers and promoting their products. According to Chen, integrated development of rural and urban areas can drive up the Chinese economy.