These are evidences showing that the scientific community in the U.S. has known about the virus almost the same time when the Chinese doctors and scientists discovered it.

“Don’t defend Trump, other than the China Travel Ban—attack China.” This was what the U.S. Republican Party directed its senatorial candidates to do in a 57-page memo, according to the U.S. media company Politico. The Corona Big Book detailed advice on nearly all potential questions voters may ask such as how to deal with accusations of racism, as well as how to tie the Democratic Party to the Chinese Government. It urged candidates to pivot to China when they are asked whether the spread of the novel coronavirus (COVID-19) is President Donald Trump’s fault.

Even though the memo was not explicitly drafted by the Republican Senatorial Committee, many of these tactics match recent performances by U.S. politicians. For example, after repeatedly referring to the coronavirus as the “Chinese virus,” U.S. Secretary of State Mike Pompeo groundlessly accused Beijing on April 23 of “destroying samples of the virus” in the early stages of the outbreak in China. “Even after the CCP (Communist Party of China) did notify the WHO (World Health Organization) of the coronavirus outbreak, China didn’t share all of the information that it had,” he alleged.

Peter Navarro, the White House National Trade Council Director, told Fox Business Network, “One of the reasons they (China) may not have let us in and given us the data on this virus early, is they’re racing to get a vaccine… so that they can sell the vaccines to the world.”

On the other hand, according to public interviews, U.S. scientists, especially those working for pharmaceutical giants, have expressed gratitude to China for releasing the viral genome to the world early and with no strings attached. 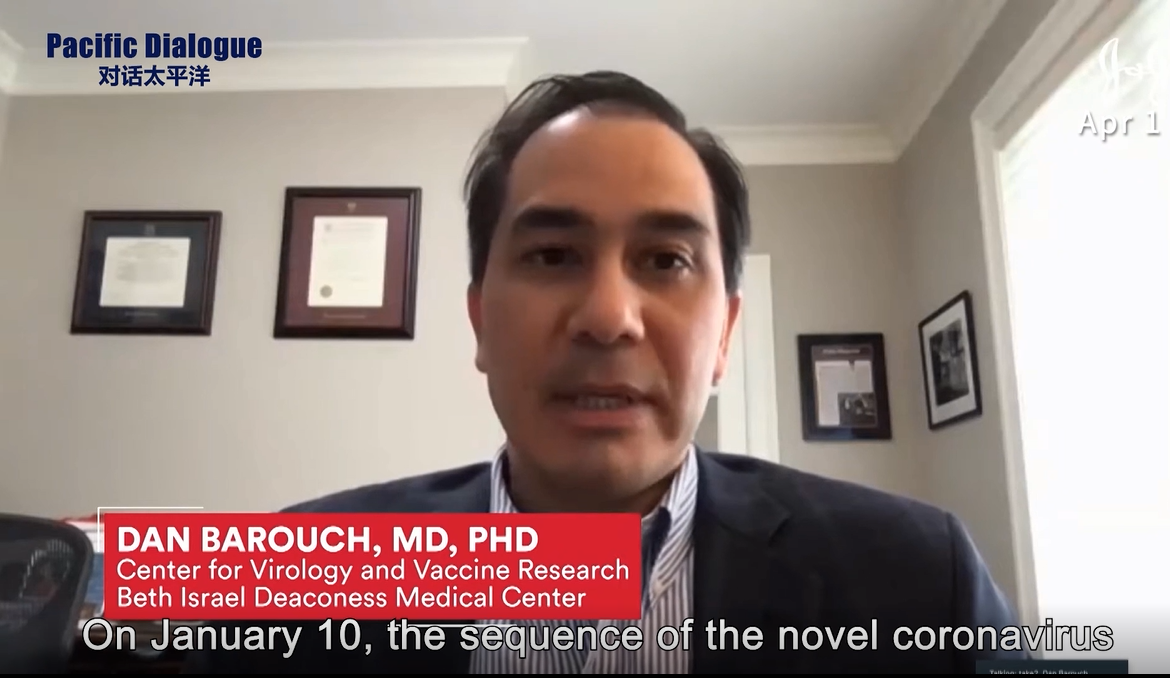 Johnson & Johnson (J&J) announced the selection of a lead COVID-19 vaccine candidate on March 30, and said it expected to initiate human clinical studies by September at the latest. “On January 10, the sequence of the novel coronavirus was released by Chinese researchers. So we started analyzing the sequence of that virus on the evening of January 10. We worked with our team through the weekend and by Monday, January 13, we had isolated or we had designed potential candidate antigens to be used in a vaccine,” said Dan Barouch, professor of medicine and immunology at Harvard Medical School, in collaboration with J&J on researching potential vaccine candidates. He talked about his team’s efforts at a J&J official website video program called “The Road to a Vaccine,” hosted by Lisa Ling. 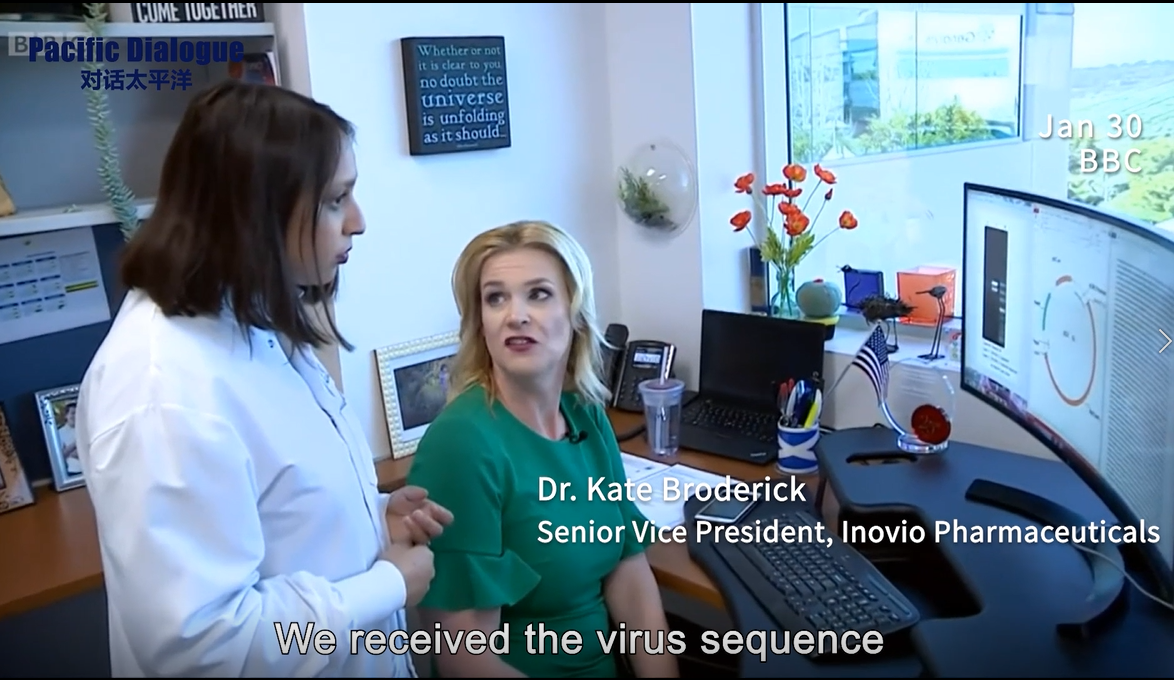 Kate Broderick, Senior Vice President of Inovio Pharmaceuticals, Inc., told BBC on Jan 30 that she first heard about the virus “in late December,” and that “we received the virus sequence when the Chinese authorities put it online… and essentially overnight, we designed the vaccine.” Inovio was working on coronavirus vaccines well before the COVID-19 pandemic hit. The company had an experimental vaccine in phase two clinical testing for treating MERS, a member of the coronavirus family, and used the platform to design the DNA vaccine candidate INO-4800, targeting COVID-19. The phase one study of the INO-4800 vaccine began in April, making Inovio one of the hottest biotech stocks on the U.S. market. 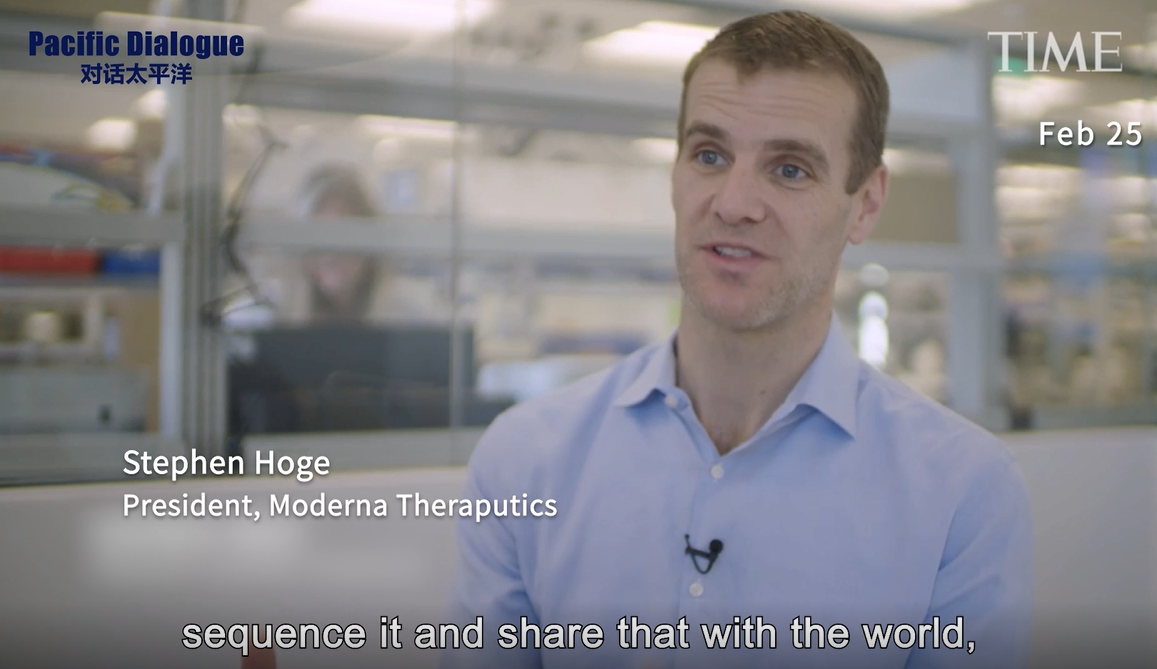 “The first thing that has to happen is somebody has to get their hands on the virus, sequence it and share that with the world, and the Chinese Government did that less than a month ago now,” Stephen Hoge, President of Moderna Theraputics, told Time on February 25. The company’s homepage shows a timeline of Moderna’s Work on a Potential Vaccine Against COVID-19, with the first event listed as: On January 11, 2020, the Chinese authorities shared the genetic sequence of the novel coronavirus.

According to Anthony Fauci, Director of the U.S. National Institute of Allergy and Infectious Diseases, at a White House press conference on January 28, “When the Chinese isolated the virus, they put it on a public database, the sequence.” Given the technology of the 21st century, we were able to use that sequence to figure out the shape of its spike proteins, Dr. Fauci said.

These are evidences showing that the scientific community in the U.S. has known about the virus almost the same time when the Chinese doctors and scientists discovered it. Professor Ian Lipkin, world famous “virus hunter” from Columbia University, was invited by the Chinese Government to come to China in January and help the country tackle the COVID-19 challenge. He stayed in China for a week.

Might there be a lack of communication between the scientific community and political community in the U.S.?

The answer is NO.

On January 28, Alex Azar, U.S. Secretary of Health and Human Services, announced that “we’ve been monitoring this virus and preparing a response since BACK IN DECEMBER.” He went on to claim that the U.S. has a playbook on epidemic containment and he knew that playbook “very well.”

But the latest news was that White House officials were discussing plans to replace him for his failure to develop a proper early response to contain the virus. Though it has been dismissed as “fake news” by U.S. President Trump, the apparent lack of media coverage of him at the White House COVID-19 press briefings shows his days as health secretary are numbered.

If Azar keeps his post, then who should be blamed for the U.S. Government’s failure to seize the golden opportunity to fight the pandemic?

The Corona Big Book memo provides a convenient answer: “This is the fault of the Chinese Communist Party for covering up the virus and lying about its danger. This caused the pandemic and they should be held accountable.