Those world leaders show different ideas on global or regional affairs. But they said no to new cold war or any attempts to split the world by escalating conflicts between the US and China.

The Pacific Ocean is not pacific in recent years. Trump Administration is now frenziedly containing China by a Whole-of-Government approach, even launching a “New Cold War”. In front of this situation, the world is at the crossroad. However, fortunately, we are witnessing a rising Whole-of-World united front against Trump and Pompeo’s scheme.

During the past three months, four American high-ranking officials were delivering speeches that aimed to call back the “(New) Cold War” amid America’s increasing tension with China.

Just a couple of weeks later, FBI Director Christopher Wray was talking about “The Threat Posed by the Chinese Government and the Chinese Communist Party to the Economic and National Security of the United States” in Hudson Institute on July 7.[2]

Finally, the series of talks on China by top US officials concluded with US Secretary of State Michael R. Pompeo’s speech at the Richard Nixon Presidential Library, Thursday, July 23, 2020, in Yorba Linda, California.[4] Pompeo’s talk of “Communist China and the Free World’s Future” has been widely regarded as a parody of Winston Churchill’s “Iron Curtain” speech.[5] Pompeo outlined that U.S. engagement with China has failed, and hence Washington and its allies must use “more creative and assertive ways” to press the Chinese Communist Party (CPC) to change its ways.

The trap of “New Cold War”

Apparently, the Trump Administration is trying its every effort to trigger a “new Cold War” that targets China. As Richard Haass, president of the Council of Foreign Relations (CFR) stated, the surreal “Trump (Pompeo) doctrine” is full of ignorance, hubris and self-contradiction.

Ties between China and the United States are strained on a number of fronts.

The on-going UN General Assembly 2020 in New York is largely being held virtually, with world leaders providing pre-recorded speeches. Along with Pompeo’s (new) cold war discourse and conducts, the growing tensions between the US and China has come to the fore. This time US President Donald Trump blamed China in public for “conceal the truth” and the “spread of coronavirus”. As often is the case for speeches to the assembly, President Trump used his address to tout his achievements and tear into a rival by employing the discriminatory name of “China Virus” and called for China to be held “accountable” for the pandemic.

“China infected the world”, Trump repeatedly swore with peremptory demands, “We must hold accountable the nation which unleashed this plague on to the world – China.” “In the earliest days of the virus China locked down travel domestically, while allowing flights to leave China and infect the world. China condemned my travel ban on their country, even as they cancelled domestic flights and locked citizens in their homes,” he added with uncontrollable anger.

However, as BBC comments, “President Trump, whose own record on coronavirus is under close scrutiny as the US heads towards elections, has frequently accused Beijing of covering up the virus, saying they could have stopped the disease spreading.” China has called the attacks an unfounded distraction. The world regards Trumps’ complaint as shirking responsibility and shifting the misfortune onto others, “Mr. Trump is trying to deflect attention from his own handling of the pandemic by heaping opprobrium on China, while emphasising US efforts to find a cure.”

It is clear that US-China relations are at the lowest point in decades since 1979 when the bilateral ties established.

The death toll of coronavirus in America now has already surpassed 200,000 and become the highest in the world while President Trump was getting used to downplayed the disease or complain CDC and China, rather than taking substantive measures to solve the problem.

As a consequence, tensions are growing between the US and China on a number of other issues, including but not limited to Taiwan, South China Sea, trade, technology, National Security Law in Hong Kong and China’s domestic religious policy.

Speaking soon after the US leader, Chinese President Xi Jinping warned of the risks of a “clash of civilisations”, “We will continue to narrow differences and resolve disputes with others through dialogue and negotiation. We will not seek to develop only ourselves or engage in zero sum game.”

In contrary to Trump’s obsession with the new cold war, Chinese President Xi Jinping explicitly informed the world leaders that China had “no intention to enter a Cold War with any country”. Compared with Trump’s rude show and abuse, the Chinese leader’s words have shown his manner and sincerity to hold the world together to deal with the pandemic, “no country has the right to dominate global affairs, control the destiny of others, or keep advantages in development all to itself.” In addition, China also promises to hit peak emissions in 2030 and be carbon neutral by 2060.

UN Secretary-General António Guterres opened the assembly and directly warned that “we must do everything to avoid a new Cold War”. 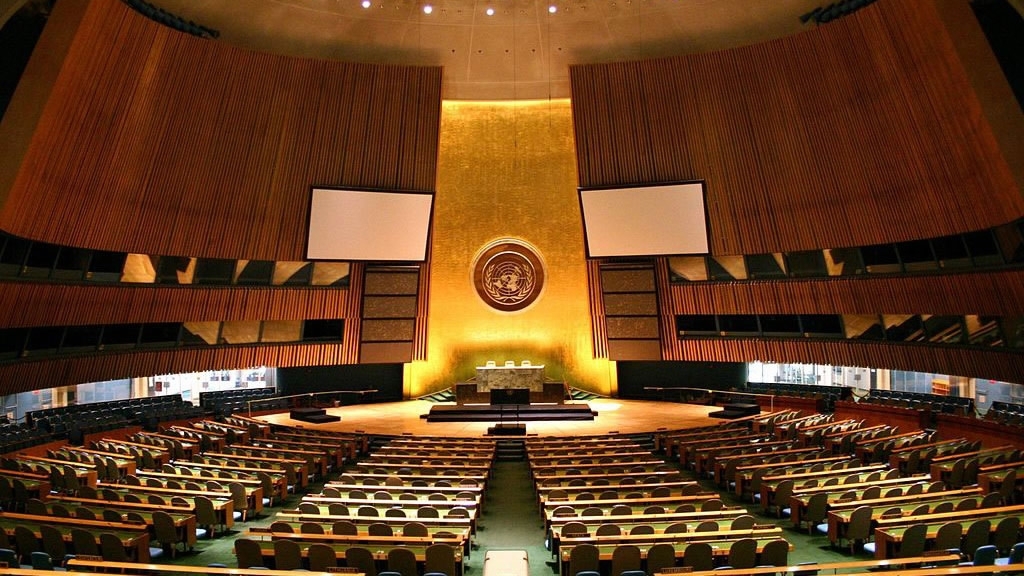 As he mentioned, “We are moving in a very dangerous direction. Our world cannot afford a future where the two largest economies split the globe in a great fracture – each with its own trade and financial rules and internet and artificial intelligence capacities.” The reason is clear that there was no room for self-interest in the face of the COVID-19 pandemic, “Populism and nationalism have failed. Those approaches to contain the virus have often made things manifestly worse.”

In all conscience, António Guterres’ words represent the willing of the international mainstream society while President Trump still insisted on his ideological doctrine of “America First” by repeatedly stressing that “only when you take care of your own citizens will you find a true basis for co-operation”.

However, other world leaders gave him a cold response.

French President Emmanuel Macron asserted that the future of the world should not be reduced to the rivalry between the US and China, calling for a “modern new consensus” in tackling global challenges; Russian President Vladimir Putin said he wanted to hold an online conference as soon as possible to discuss global co-operation on vaccines and ways to deliver them; Brazil’s President Jair Bolsonaro rejected criticism of his country’s environmental policies, saying Brazil was the victim of a “brutal campaign of misinformation”. The Amazon rainforest is currently seeing its worst fires in years; and Turkish President Recep Tayyip Erdogan called for “sincere dialogue” over a mounting row with Greece about energy resources in the Mediterranean.

Those world leaders show different ideas on global or regional affairs. But they all said no to new cold war or any attempts to split the world by escalating conflicts between the US and China. No country should act unilaterally against the public will of the international society.

As an old Chinese phrase said “A just cause enjoys abundant support while an unjust cause finds little support,” the UN assembly 2020 has clearly shown the popular sentiment. But can Trump and Pompeo read it correctly?

[2] Christopher Wray, “The Threat Posed by the Chinese Government and the Chinese Communist Party to the Economic and National Security of the United States,” Hudson Institute, July 7, 2020, https://www.hudson.org/research/16201-transcript-the-threat-posed-by-the-chinese-government-and-the-chinese-communist-party-to-the-economic-and-national-security-of-the-united-states.

The author is research fellow at Center for Chinese Foreign Strategy Studies, Renmin University of China.