What are the True Colors of Trump’s China Strategy?

It is not only building a cold wall between the US and China, but also pushing the two countries into a cold war. Trump’s China strategy is simply short- sighted and un-strategic.

A 20-page document titled “The United States Strategic Approach to the People’s Republic of China” signed by President Trump was delivered to the Congress on May 20.

This document, based on Trump’s principled realism, is intended to crystalize the Trump administration’s official view of the US-China relationship as predominantly “one of great power competition” with a commitment “to maintaining a constructive, results-oriented relationship with the PRC” for “shared interest”. While this strategy is in consistency in strategic thinking with Trump’s National Security Strategy (NSS), and National Defense Strategy (NDS) both released in 2017, it singles out China as the single target of its strategy and has left out Russia as a strategic rival which is paired with China in both NSS and NDS. 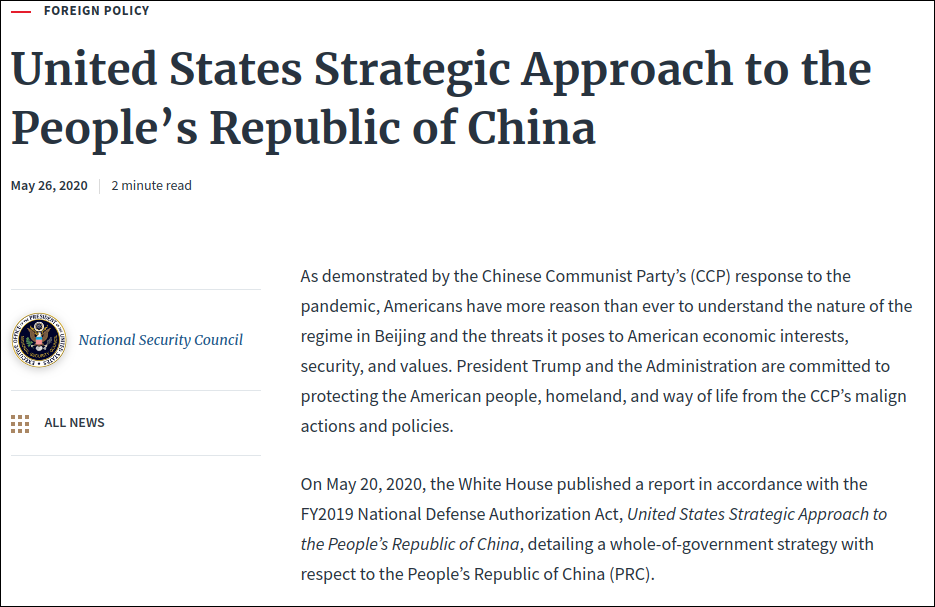 When reading this document consisting of both sharp criticisms of and stern warnings against China with an overture of limited “cooperation” with China, an amateur reader could easily conclude erroneously that this strategy is a continuation of RAND’s strategy of congagement released 21 years ago or a continuation of neoconservatism adopted by George W. Bush. To have an accurate understanding of Trump’s China Strategy, one needs to read the document both between and beyond the lines.

Reading between the lines

Despite its finger-pointing at China for its opaqueness and lack of transparency, I find that Trump’s China Strategy document hides many meanings, intentions, and plans against or about China. One prominent feature of the document is double talk or self-contradictions.

On one hand, it states “Our approach is not premised on determining a particular end state for China” or “United States policies are not premised on an attempt to change the PRC’s domestic governance model”, on the other hand, the very reason stated by this document for the birthing of this strategy is to blame and punish China for its adoption of socialism with Chinese characteristics, instead of adopting the American style capitalism which the US has tried unsuccessfully to steer China into during the past 40 years.

The whole-of-government approach, as it has been implemented by the Trump administration in the past several years, has been coercing and bullying China in various ways such as the tariff war, technology war, and even an ideological war with the whim that a good China would be a dead China with the US stamping on China’s dead body.

Another contradiction is that, on one hand, the document rejects dialogues between US and China as having no “value”, on the other hand, it states merely in the defense sector where it sees a need to have a US-China military crisis management and communication mechanism. It states: “Moreover, we do not cater to Beijing’s demands to create a proper ‘atmosphere’ or ‘conditions’ for dialogue. Likewise, the United States sees no value in engaging with Beijing for symbolism and pageantry; we instead demand tangible results and constructive outcomes.” Doesn’t this sound like a statement of demanding a ransom or “a pound of flesh” from China?

But who owes the debt of US$1.1 trillion to whom in the US-China relationship?!

This would not sound fair at all to Chinese who has a folk saying such as “How come a debtor demands a ransom against the creditor?!”

Where is fairness or justice in the above statement which is included as one of Trump’s realist principles in diplomacy repeated in this document “The principles of the United States’ approach to China are articulated both in the NSS and our vision for the Indo-Pacific region – sovereignty, freedom, openness, rule of law, fairness, and reciprocity”?

One last example is: The very first principle in Trump’s framework of principled realism is “sovereignty”. But does it mean that the Trump administration respects the sovereignty of all countries including China and the US?

Not at all, in my opinion. While Trump has been trying to implement populism and protectionism, promote or condone the White supremacy, building walls on the US borders with Mexico, and decoupling from China and so on in order to protect the sovereignty of the US, the document quietly states that “The United States is expanding its role as an Indo-Pacific nation that promotes free enterprise and democratic governance.”

Reading beyond the lines

While reading between the lines could help us better understand this document, the document can only be ultimately understood in the context of Trump administration’s past, present, and future actions and remarks on and against China. One needs to understand Trump’s principled realism to have a better understanding of Trump’s China Strategy document.

More than that, one needs to look at what Trump and his cabinet members have said and done towards China during the past several years of his presidency to assess the true meanings, intentions, and future trajectory of their action towards China during the rest of his term and possibly his second presidential term if he wins the upcoming election.

All these actions such as the arrest of Meng Wanzhou, a global campaign against Huawei, the demonization of China’s Belt & Road Initiative, shifting blame of the coronavirus pandemic in the US to China, signing the various bills on Xinjiang, Tibet, Hong Kong, Taiwan respectively so on reveal the true colors of Trump’s principled realism as a beautiful term harboring ulterior motives such as trumping China’s basic rights, dignity and sovereignty as a nation and people.

The nature of Trump’s principled realism and its China strategy it espouses is such in practice that it attempts to deprive China of CCP’s successful leadership of China in achieving the next goal of complete modernization and national rejuvenation by the middle of this century. 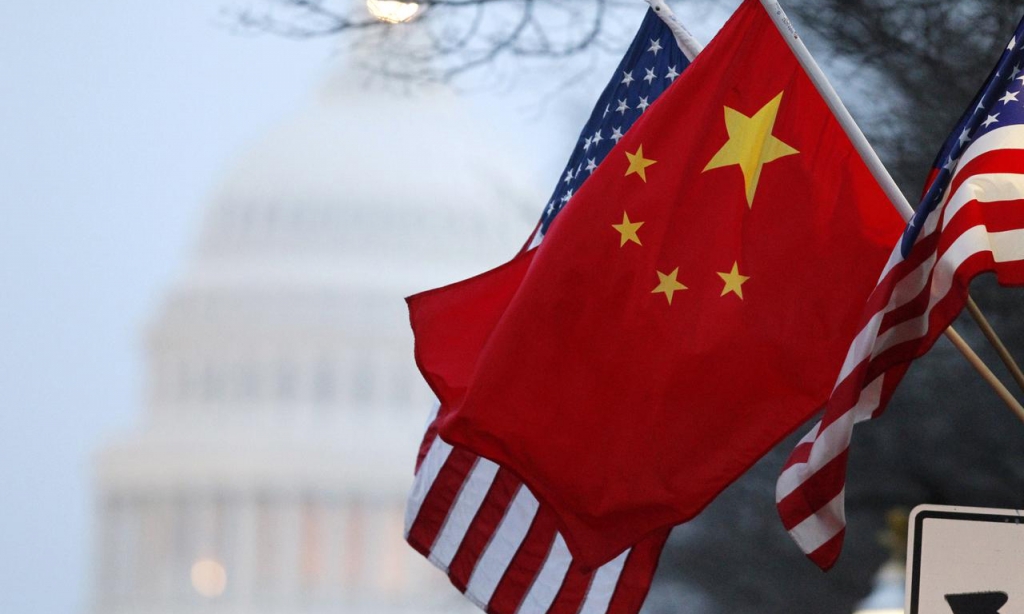 Trump’s China strategy further attempts to deprive the 1.4 billion Chinese people’s right for sustainable development and achievement of the middle-income status as a nation. The libertarian agenda of the Trump administration to proselytize Chinese people who believe in family-nation (jiaguo) and recently nation-family (guojia) first with the individualistic rights discourse would prove futile as the libertarian ideology is causing so much trouble in the US and the rest of the world. The purpose of Trump’s principled realism is to make a small ruling class of the US win it all in terms of economy, values, and security at the cost of its counterpart with as little cost as possible on the part of the US.

While it differentiates from neoconservatism on paper in that the latter aims for the US to win it in disregard to the cost on the part of the US as in the case of the War on Afghanistan and the War on Iraq, Trump’s unilateral and self-serving coercive and extreme bullying tactics against China has been costing the US, China and the rest of the world cumulatively at least as much as the costs of the two wars waged and fought by President George W. Bush in the name of “compassionate conservatism”, another name of neoconservatism which Trump has criticized sharply.

Trump’s principled realism is based on the erroneous assumption of America as the symbol of universalism and exceptionism which establish the American sense of superiority and primacy over other nations and civilizations.  Trump’s America First doctrine, in his China strategy document, has become America only, that is, the US will try to revive or maintain its sole and exclusive leadership of the world and tries to frame whatever China has been doing for the betterment of the world including its Belt & Road Initiative and its global assistance in fighting coronavirus as efforts to challenge the US’ global leadership.

Unfortunately, the Trump administration has an archaic understanding of leadership as some material entity which can be owned by a superpower forever. In this decentered world of interconnections, power and leadership exists in its responsibility and support in global peace and development. One cannot store and freeze it when it is isolating itself or shirking basic global responsibilities.

Advice for the future US-China relations

As the above analysis reveals, hiding in Trump’s principled realism is the ghost of unprincipled neoconservatism attempting to devout the basic hopes, needs and wants of the 1.4 billion Chinese people with little regard to the damages and costs of the American people themselves. It is not only building a cold wall between the US and China, but also pushing the two countries into a cold war. Trump’s China strategy is simply near-sighted and un-strategic. Therefore, Trump’s China strategy needs an overhaul for the long-term mutual benefit of US and China. The following are my suggestions for an overhaul:

However, the whole document, in much likelihood, is viewed by Chinese Government and Chinese people as a key document to ESCALATE the conflict between US and China. China would never buy into coercion and bullying of any kind. If the Trump administration is serious about reducing miscalculations, misunderstanding, and de-escalating conflicts between the two, the whole document defining the relationship as one of great power competition should not have been released in the first place. A completely new document redefining US-China relation as one of great power cooperation should have been released instead.

Jia Wenshan is Ph. D., & Professor at School of Communication, Chapman University.
Global Cultural Shifts Induced by COVID-19
Use Wechat scan the qrcode, then share to friend or feed.