China-ASEAN Cooperation and the Dawn of the Asian Century

As the top trading partner and immediate neighbor, the spillover impact of the rise of China invariably spurs the Association of Southeast Asian Nations (ASEAN)’s economic growth.

As the wheel of history turned, the center of gravity of the world has irreversibly shifted to Asia. Unquestionably, China’s rise and the momentum it has gathered over the last four decades is the key contributing force to the gravitational shift.

China’s meteoric rise since it embarked on its path of economic reform in 1978, is a success story that needs no retelling. Unprecedented in the history of mankind, more than 850 million of its people were lifted out of poverty en masse in a blink of 40 years, and it created a middle class that is larger than the total population of the United States.

By capitalizing on its abundance of industrious labor, China quickly became the world’s factory and turned itself into the engine of global growth. It surpassed the US as the largest trading nation in the world in 2013 and consistently contributing about 30 percent to the annual global growth since the 2008 Financial Crisis.

As the top trading partner and immediate neighbor, the spillover impact of the rise of China invariably spurs the Association of Southeast Asian Nations (ASEAN)’s economic growth.

ASEAN was formed in 1967 but China’s engagement with ASEAN began only in1991 when its then Minister of Foreign Affairs, Qian Qichen, attended the meeting of ASEAN Foreign Ministers in July 1991 as a guest of the Malaysian government. China was accorded full Dialogue Partner status at the 29th Annual Ministers Meeting in July 1996.

In 2003, China and ASEAN signed the Joint Declaration of Strategic Partnership for Peace and Prosperity, which heralded the beginning of a thriving and robust relationship between Asia’s emerging superpower and the regional block. 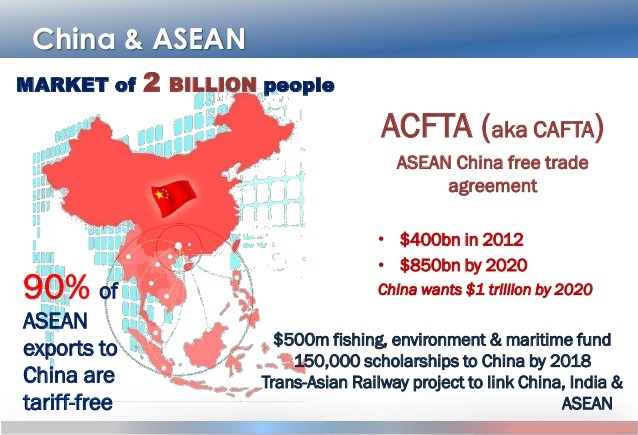 Earlier in November 2002, China and ASEAN inked the Framework Agreement on Comprehensive Economic Cooperation for the establishment of the ASEAN-China Free Trade Agreement (ACFTA), which was realized on January 1, 2010 and took full effect on January 1, 2015.

In fact, China and Southeast Asian countries have had very long history of trade and cultural links as the Chinese merchants braved the rough southern seas centuries ago to barter trade with their neighbors. It was thus no coincidence that Chinese President Xi Jinping picked Indonesia as the country to launch the 21st Century Maritime Silk Road, the seafaring component of the Belt and Road Initiative (BRI). More than 600 years ago, Admiral Zheng He, the famed diplomat and explorer of the Ming Dynasty, took the same routes when he led seven expeditions to the “Western Sea”.

China-ASEAN cooperation are multifaceted. Besides economic collaboration, China-ASEAN also consistently engage in the building of political trust and enhancement of security dialogue through various ASEAN Plus One mechanisms including summits, ministerial and senior officials meetings, as well as in broader ASEAN-led frameworks such as the ASEAN Regional Forum, ASEAN Plus Three, the East Asia Summit and ASEAN Defence Ministers’ Meeting-Plus.

As Strategic Cooperation Partner, China and ASEAN have over the years entered into a series of comprehensive cooperation agreements covering science, education, ICT, environment, agriculture, transportation, tourism and public health. In 2016, China and ASEAN adopted the Joint Statement on Production Capacity Cooperation at the 19th ASEAN-China Summit and designated 2018 as the ASEAN-China Year of Innovation.

Stretching through the South China Sea, the 21st Century Maritime Silk Road passes through the Indian Ocean, linking the Eastern seaboard of China with east Africa and Europe, while the overland China-Indochina Peninsula Economic Corridor connects China with mainland ASEAN. As China’s immediate neighbors, ASEAN countries were amongst the first in expressing their support for the BRI.

At the 20th China-ASEAN Summit held in Manila in November 2017, China and ASEAN agreed to further deepen the cooperation on infrastructure connectivity and synergize common priorities of the Master Plan on ASEAN Connectivity 2025 and the BRI.

Under BRI, China is expected to fill up the gaps of ASEAN’s much needed infrastructure investment, enhancing regional integration and boosting the economic development of ASEAN countries. Malaysia’s East Coast Rail Link (ECRL), China-Thailand and China-Laos Railways, Indonesia’s Jakarta- Bandung HSR and China-Myanmar Gas and Oil Pipelines are but some of the ASEAN BRI infrastructure projects built and funded by Chinese companies.

In November 2018, China and Singapore renamed the Southern Transport Corridor as the New International Land-Sea Trade Corridor, a multimodal and multifaceted economic link that serves as a bridge between the Silk Road Economic Belt and the 21st Century Maritime Silk Road. It is a trade and logistics passage that connects southwest China’s Chongqing to Qinzhou by rail, and from Qinzhou to Singapore and beyond by sea, thereby enhancing connectivity between China, Southeast Asia and the rest of the world.

Since the implementation of the ASEAN-China Air Transport Agreement and its protocols in early 2017, 37 cities in ASEAN have been connected with 52 cities in China through nearly 5,000 direct flights per week. Such air links greatly help promote China-ASEAN tourism.
In 2017, the Year of ASEAN-China Tourism Cooperation, tourist arrivals from China to ASEAN hit 25.2 million, an increase of 24.3 percent from 2016. Also, in 2016, ASEAN tourists to China was recorded at 10.34 million, an increase of 57.8 percent over the previous year.

China, ASEAN and the dawn of the Asian Century

As home to more than half of the world’s population, Asia now accounts for 42 percent of world GDP in PPP terms, and will top 53 percent by 2030. There is no doubt that China, India and ASEAN are the primary drivers of Asia’s growth.

China and ASEAN are two of the most robust economies of the world. China has been ASEAN’s top trading partner for 10 consecutive years since 2009. Trade between the two increased to $587 billion in 2018. In the first half of 2019, ASEAN overtook the United States as China’s second largest trading partner since 1997, accounting for 13.5 percent of the country’s total trade volume. Hence the importance of ASEAN to China, especially so in view of the prolonged US-China trade tensions.

Meanwhile, according to McKinsey, “Chinese consumption is expected to grow by about $6 trillion from today through 2030. This enormous sum is equivalent to the combined consumption growth expected in the United States and Western Europe over the same period, double that of India, and ASEAN economies together”.
China-ASEAN economic cooperation is expected to be further boosted as China seeks new markets to reduce its reliance on America. In view of the geographical proximity, ASEAN is likely to benefit tremendously from China’s consumption growth.

As China celebrates the 70th anniversary of the founding of the People’s Republic of China, the Asian Century has dawned, marking the return of the historical norm of the world economic order!

Koh King Kee is President of Centre for New Inclusive Asia and President of ASEAN Research Center for a Community with Shared Future, Malaysia.
As The World Faces COVID-19 Pandemic Challenge, China Extends Helping Hand
The Covid-19 Outbreak: Lessons to Learn, A Nation to Respect
China’s Rise Is No Threat to the Liberal International Order
Reform and Opening-Up: China’s Second Revolution
Use Wechat scan the qrcode, then share to friend or feed.