Is Moon’s Visit to DPRK the Key to Breaking Nuclear Deadlock?

As a mediator, the ROK is in a hurry to find a breakthrough for the U.S.-DPRK denuclearization negotiations which are currently deadlocked. 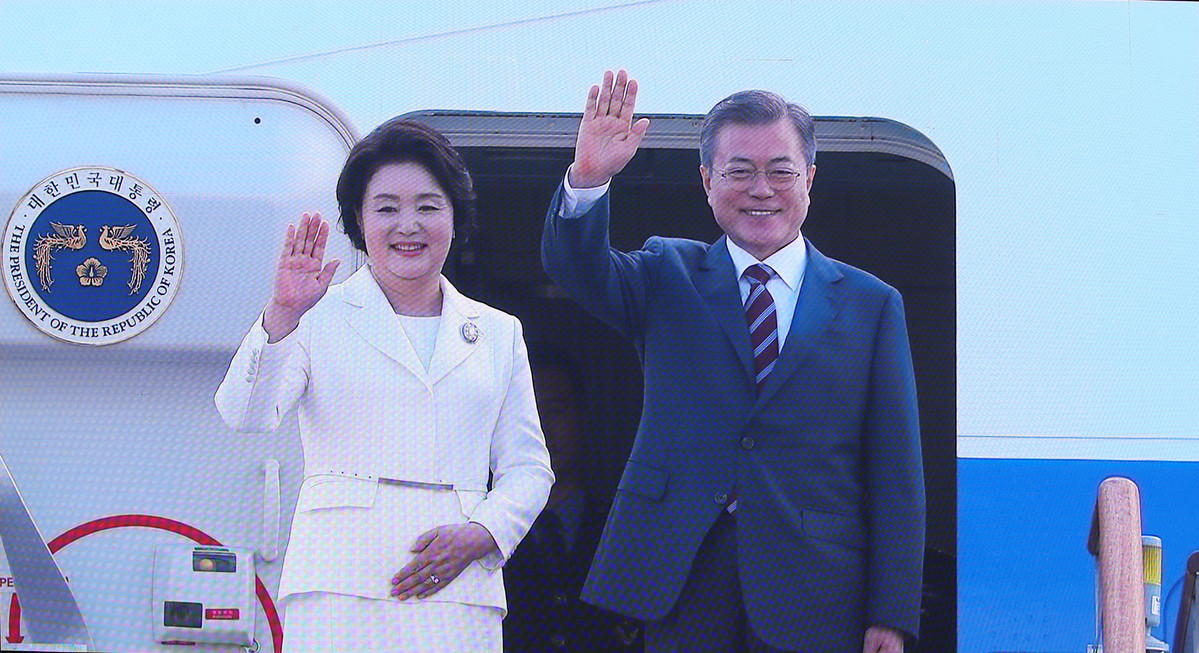 President of the Republic of Korea Moon Jae-in has arrived at the Pyongyang International Airport on Tuesday morning and was received with a grand welcome ceremony led by the leader of the Democratic People’s Republic of Korea (DPRK) Kim Jong-un.

The two greeted each other with a hug and then together inspected the guards of honor, with a huge crowd waving flowers in the background, live broadcast at a press center in Seoul showed.

This is the first inter-Korean summit in DPRK’s capital Pyongyang in 11 years. 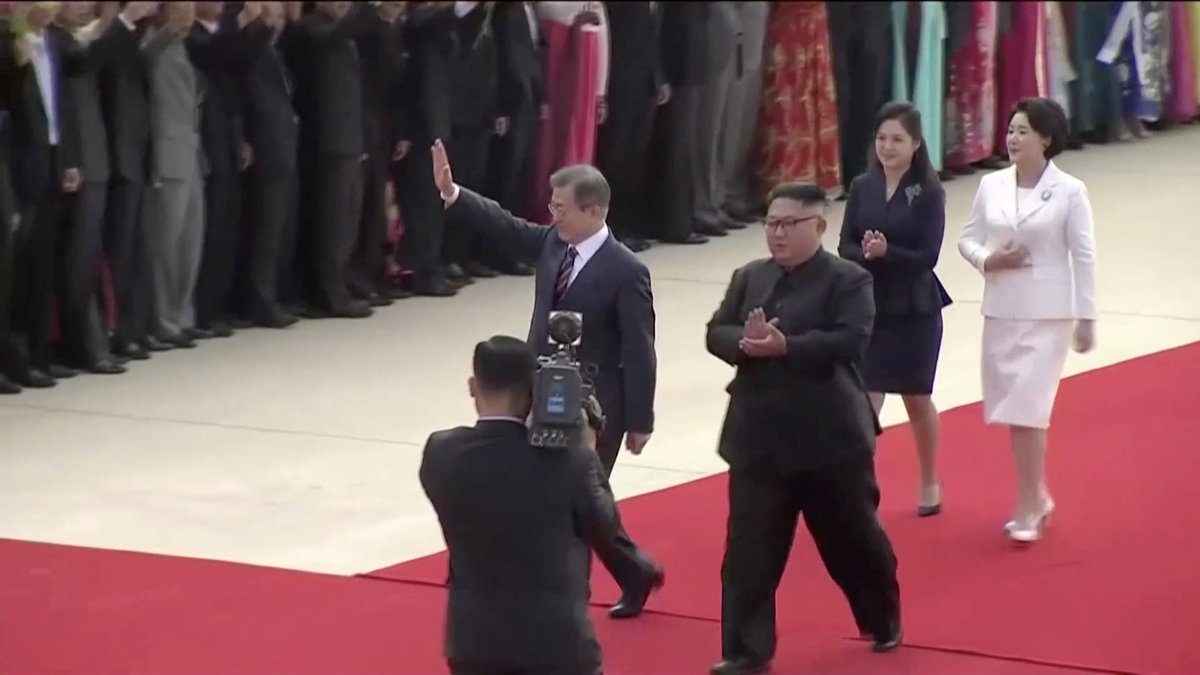 Δ Moon Jae-in waves as he reviews honour guards with DPRK top leader Kim Jong-un at Pyongyang Sunan International Airport, ahead of their third summit in this still frame taken from video, Sept 18, 2018.

Kim has promised so far this year to abandon the country’s nuclear arms program on three crucial occasions thanks to the joint efforts of the international community. Thus, the situation on the Korean Peninsula is going well.

To demonstrate its sincerity, the DPRK abandoned nuclear test tunnels and then its missile engine test site and launch site. However, after the U.S.-DPRK summit, there has been little progress in talks on nuclear abandonment. U.S. President Donald Trump abruptly called off Secretary of State Mike Pompeo’s fourth visit to the DPRK on August 24, which brought the DPRK’s nuclear disarmament process into stranding.

The denuclearization of the Korean Peninsula and the defused military tension between the two Koreas would be on the main dialogue agenda for the summit. Is Moon’s Visit to DPRK the Key to Breaking Nuclear Deadlock?

As a mediator, the ROK is in a hurry to find a breakthrough for the U.S.-DPRK denuclearization negotiations which are currently deadlocked.

On September 5, the ROK government sent special presidential envoys to Pyongyang to narrow the differences between the DPRK and the U.S. The ROK-DPRK summit, which is to be held on September 18-20, is supposed to promote the denuclearization of the entire Korean Peninsula, which demonstrates ROK’s will in guiding the nuclear situation.

After the end of Cold War, the U.S. refused to normalize its relationship with the DPRK, therefore the nuclear crisis continues till today.

Although the DPRK’s possession of nuclear weapons can threaten U.S. security, the U.S. has used that as a pretext to further control its ROK ally and increase intervention on regional affairs. Accordingly, ROK sovereignty is dwarfed within the framework of the U.S.-ROK alliance, with the partial loss of its independence in decision-making over peaceful reunification.

Once the U.S. and the DPRK establish diplomatic relations, there will be a weakening or even disintegration of the alliance between the ROK and the U.S., which conforms to the ROK’s pursuit of getting rid of U.S. in-depth intervention in its internal affairs, foreign affairs and unity. For the ROK, only if the DPRK gives up its nuclear program will U.S.-ROK relations be rid of its alliance dilemma, allowing the ROK to exert its domestic industrial and technological strengths to dominate the peaceful reunification process.

One of the purposes of ROK President Moon Jae-in’s recent dispatch of special envoys to the DPRK was to ensure that the DPRK will keep its promise of giving up its nuclear program. On that basis, the ROK can further guide the DPRK to continue negotiations with the U.S. 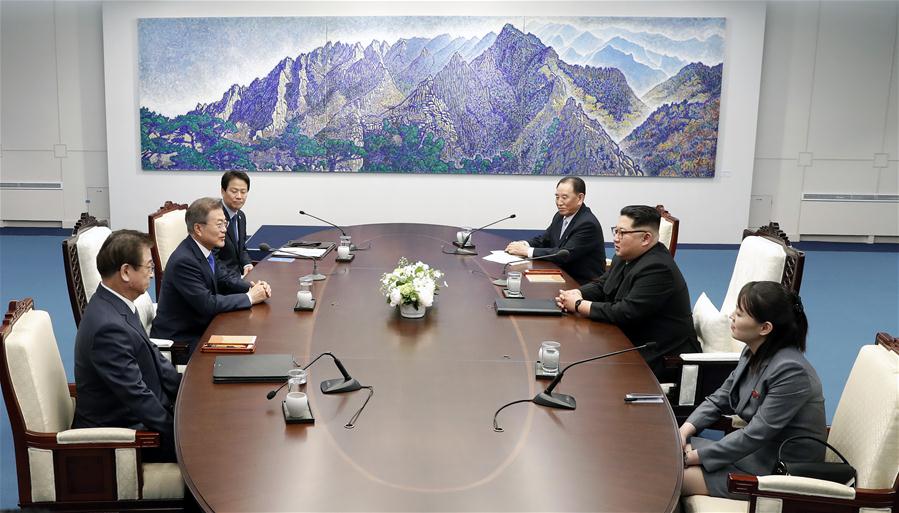 Δ Moon Jae-in meets with Kim Jong-un at the Peace House, a building on the ROK side of Panmunjom on April 27, 2018.

For the DPRK, the abandonment of its nuclear weapons is closely related to its political stability. It has frequently shown signs of abandoning its nuclear program this year, which can ease tension from the international community and lead to international aid. On the other hand, the DPRK’s actions are also based on containing the U.S. strategic offensive and preventing a war crisis.

So far, the alleged abandonment of nuclear weapons remains tactical, because possessing nuclear weapons is not only a requirement in the DPRK Constitution but also the basic line of the Seventh Congress of the Workers Party of Korea. The premise for the DPRK keeping its promise of abandoning its nuclear program is that the U.S. completely abandon its hostile policy toward the country. However, the DPRK knows that the U.S. won’t relinquish that policy easily. In order to reinforce its position in dealing with the U.S.，the DPRK needs to have good relations with China and Russia and split the U.S.-ROK alliance by promoting the great unity of the Korean nation.

However, as far as this premise goes, it will be difficult for the ROK-DPRK summit to generate any breakthroughs.

According to the ROK special envoys, during the summit, the two parties will review the fulfillment of the Panmunjom Declaration, determine the direction of future advancement, negotiate the practical scheme for achieving the denuclearization of the Korean Peninsula, and jointly show their determination to achieve peaceful coexistence and common prosperity.

The summit topics may include the following: institutionalizing the political talks and exchanges between the two countries and maintaining cooperation momentum; putting forward concrete measures of improving bilateral relations with the main focus on strengthening exchanges and cooperation in the humanitarian field; discussing specific schemes on how to build mutual trust and prevent armed conflict, such as adopting unarmed measures and laying down arms along the Military Demarcation Line and Yellow Sea (Korea calls it the West Sea).

It should not be ruled out that Moon will promise to lift some of the unilateral sanctions against the DPRK to win its trust and restore tourism in the Kumgang Mountain resort area and Kaesong. In addition, the two countries have to reach a new consensus on a denuclearization declaration and an end of war declaration.

Meanwhile, Kim’s return visit to Seoul may be included in the declaration issued during the summit.

Before the settlement of the nuclear issue on the Korean Peninsula, the ROK is incapable of changing the cruel reality that the ROK-DPRK relationship is subordinated to U.S.-DPRK relations and that the U.S.-ROK alliance is short-term. Moon said that only after we achieve the denuclearization of the Korean Peninsula and peaceful reunification can we attain real economic cooperation with the outside world. 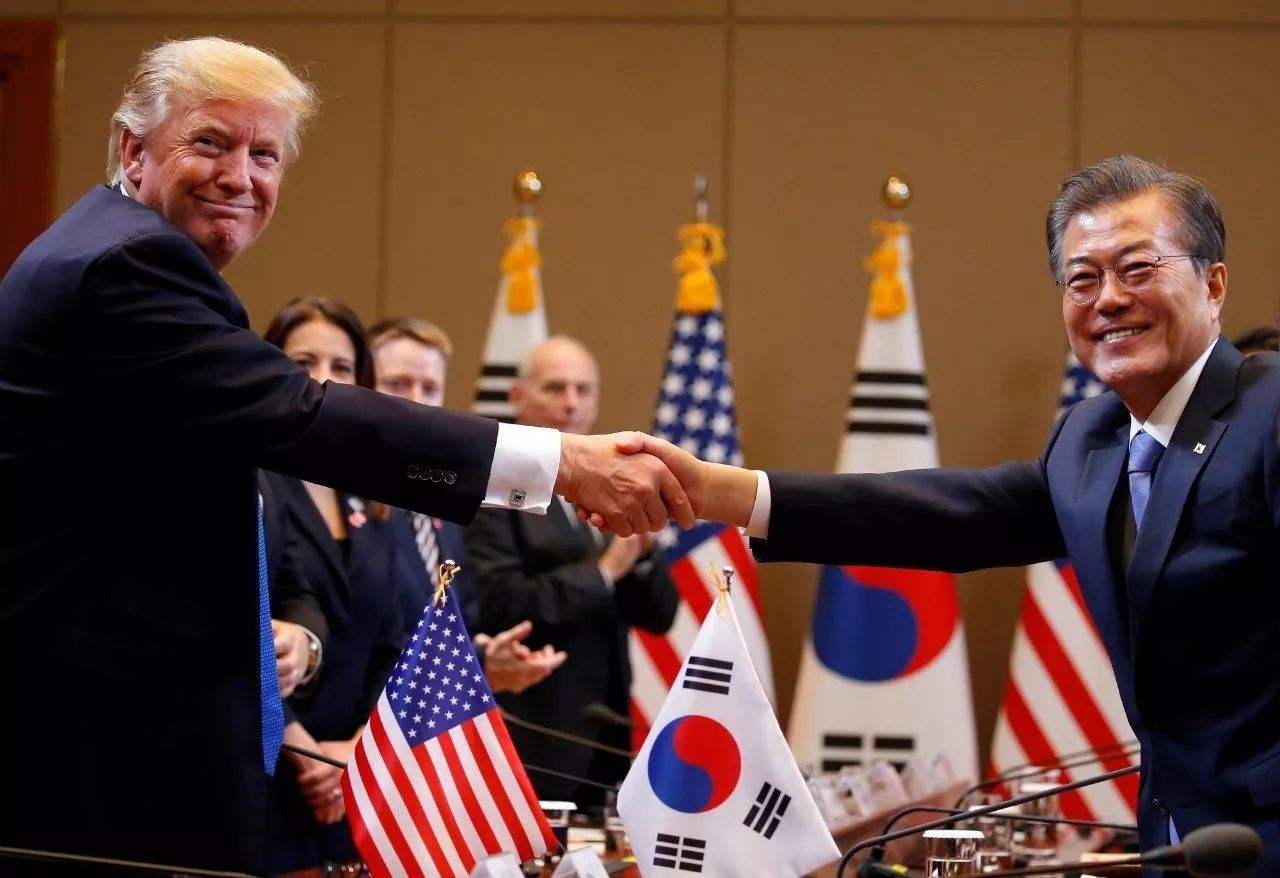 There is a clear contradiction between the U.S. and the ROK in promoting an end of war declaration: the ROK hopes to guide the DPRK to abandoning its nuclear weapons through issuing a cooperation blueprint with an end of war declaration. However, the U.S. insists that it will only start negotiations on the agenda concerning the peace issue after the DPRK has declared its abandonment of its nuclear program and finalized the timetable for giving it up. Therefore, U.S. actions are intertwined with the ROK’s unilateral cooperation policies with the DPRK.

Due to the stalled talks, the U.S. government seems to have lost its patience, thus its policy of exerting extreme pressure on the DPRK and its joint military drills with the ROK are picking up. If the DPRK adopts opportunist strategies in abandoning its nuclear program, it will result in more geopolitical challenges to it and other countries in Northeast Asia.

First, the DPRK won’t get any foreign economic cooperation opportunities and it will remain isolated. Second, there will be more anti-Moon sentiment in the ROK, leading to the weakening of an already record low U.S.-ROK alliance. Third, constantly burdened by the nuclear power in the DPRK, China will be unable to maintain a solid cooperation foundation with the DPRK. Fourth, it may provide a reason for the U.S. to address the Korean nuclear issue through military force.

Therefore, even if the third ROK-DPRK summit is held, Korean Peninsula peace still remains uncertain if the DPRK doesn’t provide a specific plan for the abandonment of its nuclear arms program. If it doesn’t, Moon’s administration can’t guide or mediate a settlement of the Korean nuclear issue. Instead, its reconciliation policy toward the DPRK will have to change under both domestic and foreign pressure, which will lead to more variations in ROK-DPRK relations.

The author’s opinion does not represent the position of China Focus.

The author is a fellow of the Charhar Institute.
Xi’s Visit to the DPRK Marks a New High in Bilateral Relations
Trump-Kim Summit Ends Fruitlessly: Three Major Signals Are Perceptible
Use Wechat scan the qrcode, then share to friend or feed.