The traditional friendship between China and the DPRK was initiated and nurtured by the former leaders of the two parties and countries, which constitutes a valuable asset cherished by both sides.

President Xi Jinping left Pyongyang for home this afternoon after a two-day state visit to the Democratic People’s Republic of Korea (DPRK). President Xi Jinping took this visit on the occasion of the 70th anniversary of the establishment of diplomatic ties between China and the DPRK.

The exchange of visits between the leaders of China and the DPRK has always been highly valued by both governments, and the DPRK former leaders Kim Il-sung and Kim Jong-il had paid multiple visits to China. From March 2018 to January 2019, Kim Jong-un, the Chairman of the Workers’ Party of Korea (WPK) visited China for four times and ushered in a new chapter of bilateral relations as the new era dawned. 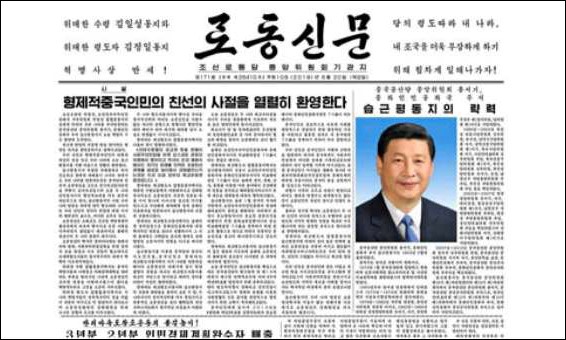 Seventy years ago, on October 6, 1949, shortly after the founding of the People’s Republic of China, China and the DPRK established diplomatic relation and exchanged ambassadors. In just a few months since then, China established ambassadorial level of diplomatic relations with ten socialist countries, including the DPRK, which marked a great victory in the history of Chinese diplomacy.

Under the background of the cold war, both China and the DPRK were subjected to the hostility and containment exerted by the U.S.-led capitalist camp. Due to the tremendous divergence in ideologies and national interests, U.S.’ brazen intervention had deteriorated the National Liberation War of the DPRK into a regional war stirred up by international powers, bringing enormous humanitarian disasters to China and the DPRK. Consequently, safeguarding regional peace became the common mission for both countries.

Joint opposition to foreign aggression has forged profound relationship between the two parties and the people of the two countries, and the two countries have become interdependent geopolitical partners. In 1961, several years after the withdrawal of the heroic Chinese People’s Volunteer Army from the DPRK, the two sides signed the Sino-DPRK Mutual Aid and Cooperation Friendship Treaty to safeguard the security of the two countries and regional peace. So far, this treaty still plays an irreplaceable role in maintaining regional peace.

The traditional friendship between China and the DPRK was initiated and nurtured by the former leaders of the two parties and countries, which constitutes a valuable asset cherished by both sides. The China-DPRK Friendship Tower, erected on the bank of the Taedong River, and the Cemetery of Chinese People’s Volunteer Army inside the territory of the DPRK demonstrate the unique relationship between the two countries to the world.

In the new era, regardless the turbulent transformations in the international arena and regions, the friendly bond interlinking China and the DPRK constitutes the indestructible foundation of bilateral relations, which also needs to be inherited, developed and maintained.

Creating a New Situation for Regional Peace and Stability

As a permanent member of the Security Council, China resolutely opposes any party to change the status quo and undermine the peace in the Korean Peninsula. On the one hand, China firmly opposes the DPRK’s nuclear test; on the other hand, China ‘s position in adhering to the goal of denuclearization, resolving the DPRK nuclear issue peacefully and maintaining regional peace and stability remains unshakable. In addition, China has repeatedly clarified its policy position of “Double Suspension” and “Double-Track” to support the DPRK’s reasonable demands.

Since the 19th National Congress of the CPC, China has demonstrated a responsible mighty power in addressing the Korean Peninsula affairs. In accordance with relevant UN resolutions, China strictly implements sanctions against the DPRK and strengthens communication and coordination with other relevant parties. China supports the DPRK to adhere to the denuclearization of the Korean Peninsula, to improve relations between the DPRK and the Republic of Korea(ROK), to back the DPRK-U.S. summit meetings for achievements and to support the relevant parties to hold dialogues in resolving their legitimate concerns.

During the talks held in Pyongyang, President Xi spoke positively of the DPRK’s efforts to maintain peace and stability and promote denuclearization of the Korean Peninsula. Xi also stated that China is willing to provide the DPRK with all our power to help solve its concerns about security and development. As the DPRK-U.S. dialogue and DPRK-ROK relations remain stagnant in a deadlock, this statement is conducive to regional peace, stability and development which conforms to the common interest of both countries.

Inject New Impetus into the Development of Bilateral Relations

On June 19 2018, President Xi stated firmly his “Three Supports” for China-DPRK relations, China-DPRK friendship and the socialist DPRK. Strengthening friendly exchanges and pragmatic cooperation constitute the most reliable guarantee for the everlasting friendship between China and the DPRK and also the greatest support for the DPRK’s socialist construction.

First, we should keep normal strategic dialogue and communication on issues involving the security interests of the two countries and regional peace. China and the DPRK need to exchange views frankly and openly on a myriad of problems comprising the DPRK nuclear issue, the ROK-U.S. alliance relationship, and the normalization of the U.S.-DPRK relations, so as to prevent the deterioration of regional security situation and establish a peaceful system on the Korean Peninsula through peaceful settlement of the DPRK nuclear issue.

Finally, sincere exchanges of experiences should be conducted in state governance and socialist modernization. Since the reform and opening-up started in 1978, the Chinese model has achieved enormous success in eliminating poverty and improving people’s livelihood. Based on such achievements, China firmly supports the shift of the DPRK’s strategic focus towards economic construction. China is willing to introduce its development experience to the DPRK and enhance cooperation in economic development and policy making.

The author is a fellow of the Charhar Institute.
Trump-Kim Summit Ends Fruitlessly: Three Major Signals Are Perceptible
Is Moon’s Visit to DPRK the Key to Breaking Nuclear Deadlock?
Use Wechat scan the qrcode, then share to friend or feed.