What is Behind US ‘Irrational’ Actions in the Trade War

President Trump’s administration, by introducing tariffs against China, is directly acting to reduce the living standards of the US population.

President Trump’s administration, by introducing tariffs against China, is directly acting to reduce the living standards of the US population. This will make worse a situation which is already quite serious – as US real wages, that is money wages adjusted for price rises, have been falling for the last three months due to rising inflation.

Introduction of tariffs is therefore not merely against the interests of the American population, but is a direct threat to the Trump administration’s popularity in the run up to the US mid-term Congressional elections in November.

Δ The mid-term elections in November is coming soon.

What, therefore, explains the Trump administration proceeding with apparently irrational actions – measures which are against the interests of the US people and undermine its own popularity? Analysis of the situation in the US makes the explanation clear – the Trump administration has only a narrow window of opportunity to introduce tariffs against China before the pain these cause will become still clearer. To show this first the objective situation in the US will be examined and then its effect on US public opinion noted.

Tariffs are necessarily inflationary because they are a tax. This tax is not paid by the producers of goods – they generally receive the same price for their product to which the tariff is then added. The higher price after the tariff is paid by the consumer – the revenue from the tariff being paid to the government. Therefore, tariffs put up price for consumers.

Americans already understand tariffs create price rises.  For example an opinion poll was carried out by Morning Consult and published by the leading US website Politico. When asked, ‘do you think that raising tariffs on aluminum and steel imports will make those materials more expensive, less expensive, or not make much of a difference either way for U.S. businesses?’ 59% believed the tariffs would make products more expensive compared to 6% who believed they would make them cheaper.

The fact tariffs cause price rises has a seriously harmful effect for the US population because inflation is already causing US real wages to fall. This is shown in Figure 1. Since the beginning of 2015 the rate of increase of US hourly money wages has risen from 2.0% to 2.7%. But in the same period the US consumer price index rose from -0.1% to 2.9%. As inflation is now higher than the increase in money wages US real wages are falling. 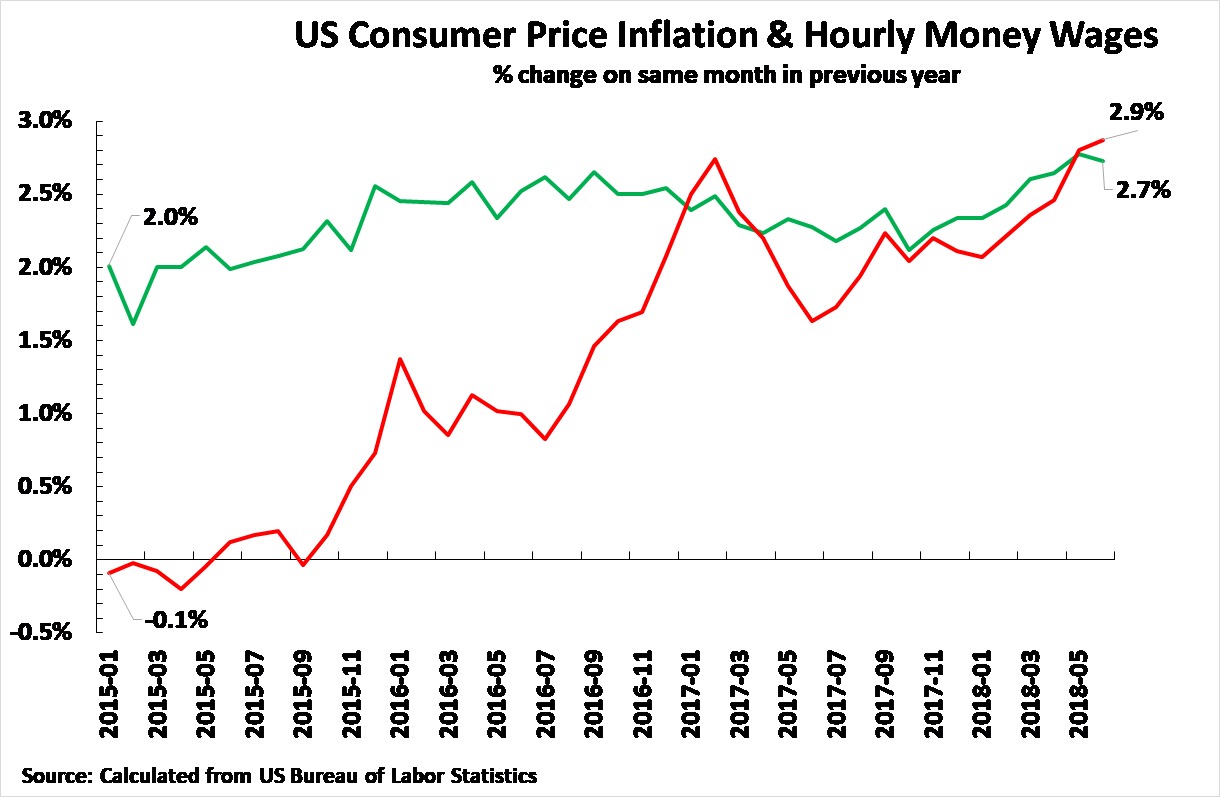 This trend is seen in Figure 2. At the beginning of 2015 US real wages were rising at 2.1% a year. The peak of US real wage increases under the Trump administration was 0.6% in June 2017. But due to rising prices US real wages have been falling for the last three months, and in July 2018, the latest available data, fell by 0.2%. 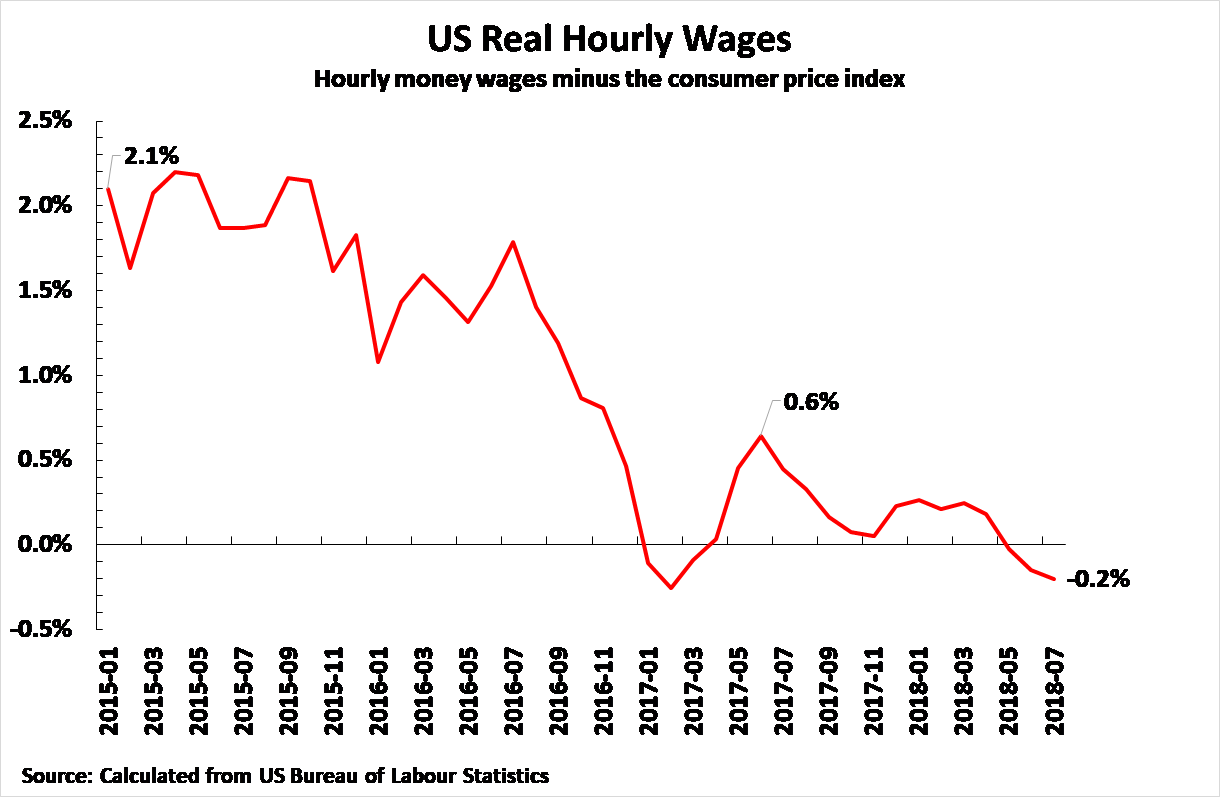 The effect of tariffs directly interrelates with US real wages because, as already noted, tariffs are inflationary. This is confirmed by US tariffs which have already been introduced.

But tariffs on washing machines and on steel and aluminium cover a much smaller range of goods than tariffs affecting $250 billion of imports which have been threatened by the Trump administration against China. The price rise consequences of tariffs against China for US consumers will therefore be more severe.

The most thorough study of US-China trade, by the respected Western economics company Oxford Economics, which has no connection with China, found that low prices of goods from China saved the average US household $850 a year – therefore, equally, the Trump administration’s tariffs can cost each US household up to $850 a year!

The very negative effect of anti-China tariffs on US living standards explains why the Trump administration is attempting to go fast in its tariff policies. At present the US economy is in the upswing of a business cycle. But in 2019-2020 the US economy will slow down – the IMF, which  historically had a too optimistic view of the US economy, estimates US GDP growth will be 2.9% this year, 2.7% in 2019, but only 1.9% in 2020 and 1.7% in 2021. This means that the pain to the US population from tariffs will increase even further. Hence the apparently ‘irrational’ actions by the Trump administration – to introduce its tariffs it has to attempt to go very fast, before the pain to the US population from rising inflation this year and a slowing economy in 2019 becomes too severe.

This dictates the dynamic of the trade wars. Time is on the side of China, but the Trump administration has to try to go fast.

The Wall Street Journal noted this under the self-explanatory headline ‘Trump’s Narrow Window for Trade Wins in China’.

‘On the U.S. side, salad days of 4% growth and 2% inflation look hard to sustain… Consumer price inflation, already hovering around the Federal Reserve’s target of 2%, may not be far behind. And the next tranche of threatened tariffs will hit industries that China dominates, meaning finding alternative suppliers to alleviate an upward squeeze on prices will be tougher. China supplies over 50% of U.S. imports across the affected sectors, according to Capital Economics.

‘President Trump’s window for a favorable deal with China is a narrow one. Investors should look for breakthroughs by early 2019—or not at all.’

That is a very sombre estimate – from a source which is not at all pro-China.

The author is Senior Fellow at Chongyang Institute for Financial Studies, Renmin University of China and former Director of Economic and Business Policy for the Mayor of London

You May Like
Thrive Not Survive: Why China’s Stimulus Package is Different This Time
No Alarm over China’s Slowing GDP Growth
Meeting Expectations
How Can China’s Economy Maintain Steady Growth at a Challenging Time?
China’s Living Standards Will Continue to Rise
Trump Trade Balance Goal Fails
Will the Trade War Hit the Chinese Economy in H2?
China’s Greater Bay Area: the Next Engine of Growth
Use Wechat scan the qrcode, then share to friend or feed.