Why No GDP Target in China’s Government Work Report for 2020?

The Government Work Report puts the people’s basic income and living conditions at priority, to secure a growth in their income with the growth of economy.

Contrary to the general expectation, Premier Li Keqiang’s The Government Work Report at the opening session of NPC on May 22 does not set a GDP growth rate target for 2020, the first time since China’s reform and opening-up. It is a practical and reasonable consideration due to the unprecedented outbreak of COVID-19 which brought China’s economy to a halt for over two months, and a caution on the tremendous uncertainties brought by the worldwide rampant virus spread and the worst recession since the Great Depression in the 1930s.

China suffered a 6.8 percent GDP fall in Q1, 2020, the first negative growth since 1976. There has been a solid rebound since April, with the industrial out added value grew 3.9 percent year-on-year. Retail sales for the month fell by 7.5 percent year-on-year, while the fall in Q1 was 16.1 percent. The fall in fixed investment also narrowed to 7.5 percent, compared to 16.1 percent in Q1. Export in April even registered an 8.2 percent growth over a year ago. The economic activity and output as a whole, however, has not recovered to the year-ago level.

While China has brought the COVID-19 under effective control and thus resumed the economic recovery, the rest of the world is suffering the formidable devastation of the pandemic and the outbreak of the worst recession in 90 years. IMF has estimated a negative 3.0 percent world GDP fall for 2020, 10 times as in 2009 after the Global Financial Crisis, and will further revise down the figure soon. WTO has also estimated 13-32 percent fall of world trade for 2020. Faced with a sharply contracted world demand and disrupted flows of goods and capital, China’s export order PMI index fell drastically to 33.5 in April from 46.4 in March. Under these circumstances, it will be unrealistic for China to hit a strong rebound in Q2. On the contrary, China’s GDP for the current quarter might not reach the same level of Q2 2019, thus leaving the first half performance in a negative area again, with the fall much smaller than that for Q1.

There have been some optimistic tones regarding the second half growth. Some even estimate 10-15 percent growth year-on-year, pending a strong rebound in consumption, production and investment, thus resulting a 5-6 percent growth for the whole year 2020. This assumption seems unfounded both on facts and on economics. Even if a strong rebound happens in the second half in China, on the pre-condition that the world COVID-19 is under effective control and the economy rebounds by then, the higher growth rate will only be compared to the preceding period, or the first half, not the same period of 2019, because any year-on-year growth rate higher than 6.5 percent will see a constraint in capacity. 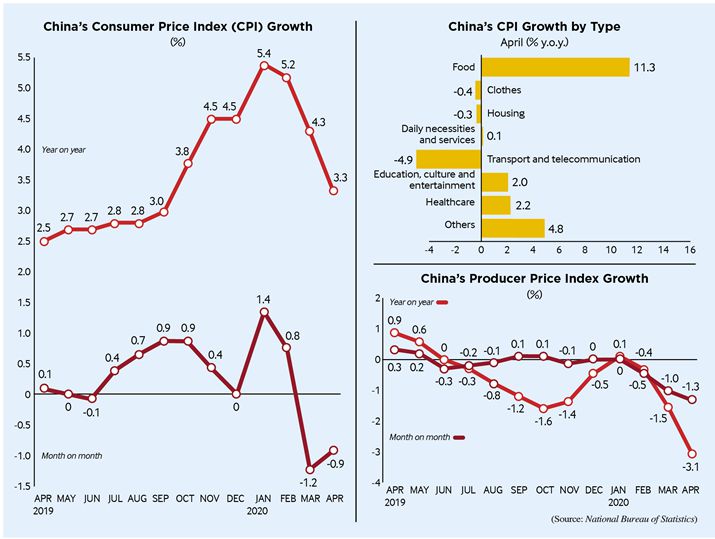 The Government Work Report put the basic needs of the people the prime target for the year instead of GDP growth. The top priority is job creation. The report envisages a job creation of 9 million for 2020, which is over 3 million less than 2019, with the urban jobless rate at 6 percent, higher than 2019. The economic downturn caused by the pandemic threatens millions of jobs and small and micro businesses, a challenge more serious than the economic fall.

In relevance, the report puts the people’s basic income and living conditions at priority, to secure a growth in their income with the growth of economy.

The Report reassures the central goal of the total eradication of poverty by the end of 2020, and thus to attain a moderately prosperous society by the end of the year, as stipulated by the 19th CPC National Congress.

China joins the leading economies of the world in massive fiscal and monetary policy measures to shore up the economy and the people’s livelihood. The Government Work Report suggests an additional 1 trillion yuan in fiscal deficit for a special government bond, a cut of 2.5 trillion yuan business taxes, duties and other burdens, also 3.75 trillion yuan local government bond and 600 billion yuan investment by the central government, and calls for 40 percent increase in small and micro business loans by large commercial banks. The report also demands an expansion of social security to cover all the households in difficulty.

The afore-mentioned policies aim at both support people’s livelihood and the economic growth. Much of the local government bond will be deployed to support investment in new infrastructure, including 5G telecom base stations, ultra-high voltage transmission, intercity high-speed railway transportation, new energy automotive charge piles, big data centers, artificial intelligence and industrial internet. The investment will not only shore up the economic growth, but also constitute a solid foundation for the upgrading toward a high-quality, sustainable growth in the years to come.

On the contrary, the US economy will not fully recover until the end of 2021, according to Jerome Powell, FED chairman. In other words, the US economy will get back to pre-COVID-19 level by 2022. During the period, China will not only continue to increase its share in the world economy, but also provide an even stronger support to the latter to pull out of the recession and resume a sustainable growth.

The author is senior fellow, Center for China and Globalization, former economic and commercial counsellor at Chinese Consulate General in San Francisco and New York.
The Abrupt FED Rate Cut: for Fighting COVID-19 or for Stock Market?
America is Yielding China Trade to ASEAN and EU
How Trump’s Extreme Pressure on China is Backfiring
Trade Conflict Suggests Hard Times Ahead
Use Wechat scan the qrcode, then share to friend or feed.