Neither the less, with the WHO’s announcement that COVID-19 is now a pandemic, the time for containment appears over and the move to social distancing must happen across the world in earnest.

On March 11, the World Health Organization (WHO) relented and finally labelled the coronavirus a pandemic, raising the virus to the organization’s most serious classification.

Increasing the level is a significant shift by the WHO, who had prevented calling the coronavirus a pandemic for months in fear of the stigma attached to such a term. However, as cases have spread to 114 countries, killing over 5,000 people and infecting over 130,000, the move became inevitable.

While the word pandemic rightly invokes fear and concern, the WHO were quick to relay that this is not a reflection of a change to the virus’ level of severity, rather relating to how the virus should be dealt with from this moment forward.

“Describing the situation as a pandemic does not change WHO’s assessment of the threat posed by this virus. It doesn’t change what WHO is doing, and it doesn’t change what countries should do.” WHO director-general Tedros Adhanom Ghebreyesus said at Wednesday’s news conference.

Key to what countries should do, Tedros said, is stepping up measures for people to minimize their exposure to infected individuals by avoiding large public gathering and adhering to spacing requirements—in effect social distancing.

The latter term has become a buzz word for the coronavirus, with different countries going to different extremes to try and initiate this policy.

In the countries such as the UK and the United States, social distancing has generally been loosely applied. Some events, for example the US Democratic Party primary rally’s and sporting events, have been cancelled in the wake of growing cases ad deaths, while their governments have also encouraged greater care when washing hands and encouraging people to give “elbow-bumps” as a greeting in place of handshakes and hugs.

At the other end of the spectrum, such as in China and Northern Italy, social distancing is quite a different proposition. In the case of Wuhan, where outbreaks of the virus were first recorded, the city went for almost “total-social distancing”, putting the it into complete lockdown with schools, businesses, transportation links and tourist destinations all closed off as members of the public were told to stay inside.

Countries are now choosing how best to react to the latest WHO developments and implement policies that are best suited to their respective political backgrounds and societal norms. But there is a growing body of evidence from previous pandemics and research being carried out on the current coronavirus which suggests stepping up social distancing policies may be the most effective way forward.

Pandemics such as the current coronavirus thankfully are a rare occurrence, especially in the twenty first century. But those instances where they have been experienced have shown social distancing as essential and effective move for reducing infected cases.

The 2009 Flu Pandemic, which infected about 60 million people and caused 150,000 to 575,000 fatalities around the world, was the last health emergency to be declared a pandemic by the WHO. Some countries, such as Mexico, implemented measures to ward off those members of the public most susceptible to the virus, which in the case of 2009 was children, and they quickly closed schools.

In his research on studying how these measures affected the flu outbreak, Dr. Gerardo Chowell of NIH’s Fogarty International Centre and Arizona State University, Tempe, concluded that the Mexican government’s decision to close schools for eighteen days helped reduce influenza transmission rates by between 29 and 37 percent, saving thousands of children’s lives, and crucially giving authorities time as they searched for a vaccine, which was eventually found.

Initial research into the effectiveness of such measures on the current coronavirus pandemic has been conducted, focusing on China and in particular the city of Wuhan.

Since the outbreak occurred, no country or city has taken such drastic measures to reduce social interaction as the authorities in Wuhan, with those in charge implementing the entire closure of a city from the outside world and asking eleven million people to stay inside whilst the government tried to contain the spread of COVID-19.

Unlike in Italy, where a similar lockdown is currently underway in the northern part of the country, the authorities also moved to isolate infected people into one area and away from family members who had not yet contracted the virus with the construction of fourteen provisional hospitals.

Preliminary studies show that the steps taken by the government, and the sacrifice made by those people inside Wuhan to isolate themselves, appear to be have been decisive. According to a paper published on health science journal MedRxiv by a group of scientists from two universities in China and Harvard Professor Xihong Lin, enacting social distancing policies “effectively controlled” the outbreak in Wuhan.

By looking at individual-level data from 25,961 laboratory-confirmed Covid-19 cases reported through February 18, 2020 and dividing them into four periods including before the lockdown was introduced on January 23 and after it, they found that the effective reproductive number dropped from 3.86 before interventions to 0.32 post interventions because of these measures. Furthermore, the scientists believe the interventions were estimated to have prevented 94.5 percent of infections till February 18. 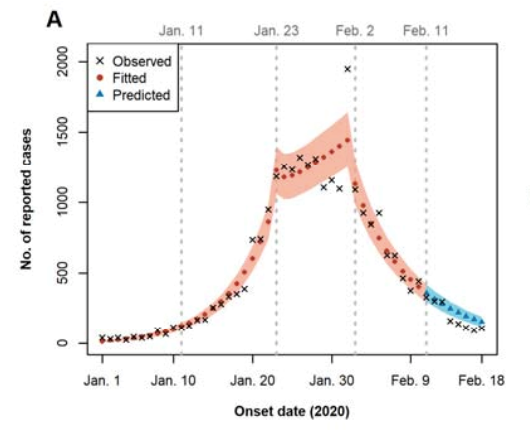 Evidence by the population mapping group WorldPop at Southampton University in the UK also shows how without interventions such as early detection, isolation of the infected, and travel restrictions which were implemented, cases of the virus in China would have been much worse.

Sophisticated modelling from the data group showed that there were 79,824 cases of COVID-19 in China by the end of February. But without the interventions made by authorities, that number would have been 67 times higher, based on their mapping predictions, with a one, two or three- week delay causing the number of cases to potentially have rocketed three, seven and 18-fold respectively.

Whether it is possible for other countries to initiate such robust social distancing policy as the government in Wuhan was able to remains to be seen. Italy, while under a similar lockdown, has not yet enacted its measures with the same severity as those in Wuhan, such as isolating infected family members from one and other to limit the spread, which is perhaps why scientists believe it has not yet made the desired results.

Nether the less, with the WHO’s announcement that COVID-19 is now a pandemic, the time for containment appears over and the move to social distancing must happen across the world in earnest.

Thomas Scott-Bell is an editorial writer for China Focus.
Coronavirus: As Schools Close Across the World, How Has China Kept Students Learning?
Divided Democratic Party Spells Trouble for Both Biden and Sanders
It’s Time to End Senator Cotton’s “Conspiracy Theory” on the Coronavirus
Outbreaks Expose the Best and Worst of Society
Use Wechat scan the qrcode, then share to friend or feed.