Coronavirus: Netizens Against Racism Stand in Solidarity with Chinese People

Though small pockets of racism and discrimination are growing on the fringes of society, many more people around the world are condemning such behaviour and standing in solidarity with the people of China in their battle against coronavirus.

Cases of novel coronavirus are rising rapidly in China, and beyond its borders the spread continues to grow.  One of the consequences is that there has been a notable rise in acts of prejudice, discrimination and even racism towards and against Chinese people.

There have been reports of verbal attacks, signs placed in shops and restaurants reading “No Chinese,” and a reemergence of the old tropes against East Asian culture.

In countries including, Australia, Canada, the UK, France, Italy and the US, people have begun to avoid areas with a large Chinese population, and Chinese people have witnessed a trend of others shielding their noses and mouths when they approach. It appears that the fear of novel coronavirus is beginning to spill over in to the more broad and irrational fear of Chinese people in general.

Fortunately, though small pockets of racism and discrimination are growing on the fringes of society, many more people around the world are condemning such behaviour and standing in solidarity with the people of China in their battle against coronavirus.

I Am Human. Not A Virus

The hashtag #IamNotAVirus (and its French translation #JeNeSuisPasUnVirus) shared by frustrated Chinese people in the UK and France, quickly gained momentum and the responses were overwhelmingly supportive.

One twitter user named Michele Li shared her story of a group of “mindless teenagers” racially abusing her on the bus. Almost 100 people responded to her post, with some sending reassuring messages of support.

Twitter user @nexaaaay_ urged people not to allow fear of the novel coronavirus to influence their behaviour towards Chinese people, stressing, “This is NCov virus not Chinese virus.” 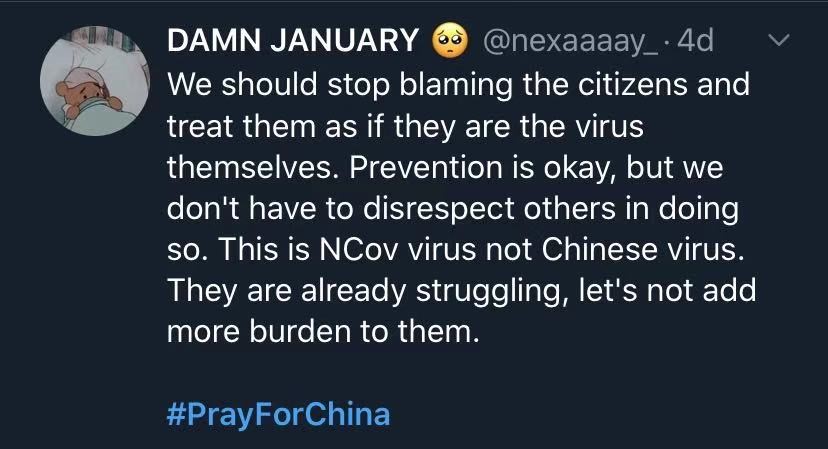 Chinese people are already struggling, “let’s not add more burden to them,” she added.

In Italy, one Chinese student equipped with face mask and blindfold stood silently in a busy street next to a sign reading, “I am not a virus. I am human. Eradicate the prejudice.”  In a reassuring display of humanity, many passers-by stopped what they were doing to hug the young man and offer kind words of support. The video has since been uploaded and shared widely, gaining hundreds of thousands of views and receiving thousands of messages of support.

In the Philippines, a similar spike in racism from a minority of actors, has compelled people from across the country to express their repulsion of such behaviour. Well-wishers from the Philippines and beyond, accompanied their messages of support using the hashtag #PrayForChina, and after just a few hours, thousands of messages had poured in.

One twitter user with the handle @astrophileplus, commended Chinese people for their resolve in dealing with the “harsh words” being “thrown” at them. “Great job to all Chinese tourists in Ph[ilippines],” he said. “I hope love and compassion will prevail in everyone’s heart. Together let [u]s resist this pandemic.” 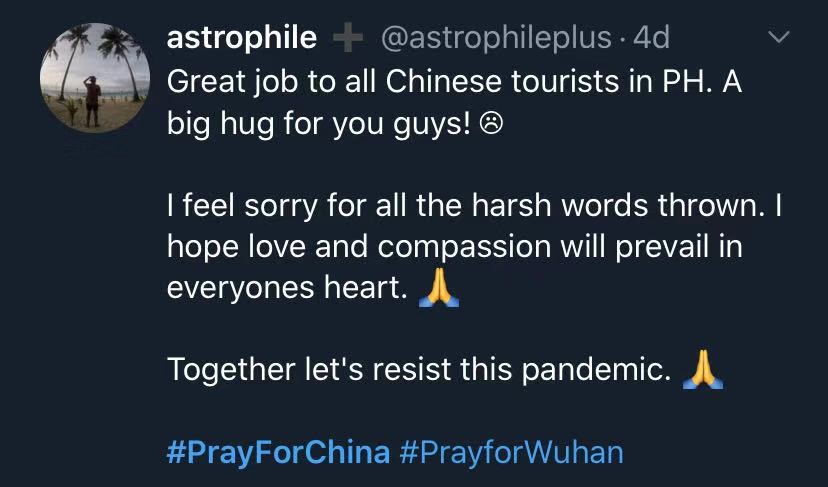 Twitter user Dean Fortun, also posting from the Philippines, offered a message of hope and understanding. “We empathise with the Chinese people [and] are one in battle against coronavirus” he said. The battle will be won through seeking “scientific and factual information” and eradicating “prejudice” he added. 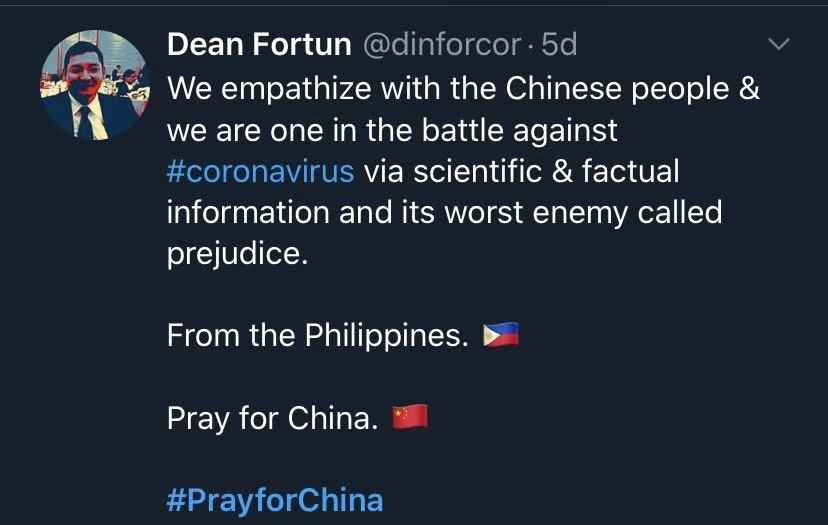 In addition to the many expressions of solidarity with Chinese people suffering racism and discrimination in its many forms, many netizens have paid homage to the selfless medical professionals working round the clock.

Images of exhausted healthcare workers taking a nap in full hazmat suits on a hospital floor and similar pictures depicting their struggles have been shared thousands of times online. “Respect [to] the unsung heroes” commented social media influencer Alvin Foo. “Hats off to them” applauded Christopher Lee, a physician based in Malaysia. 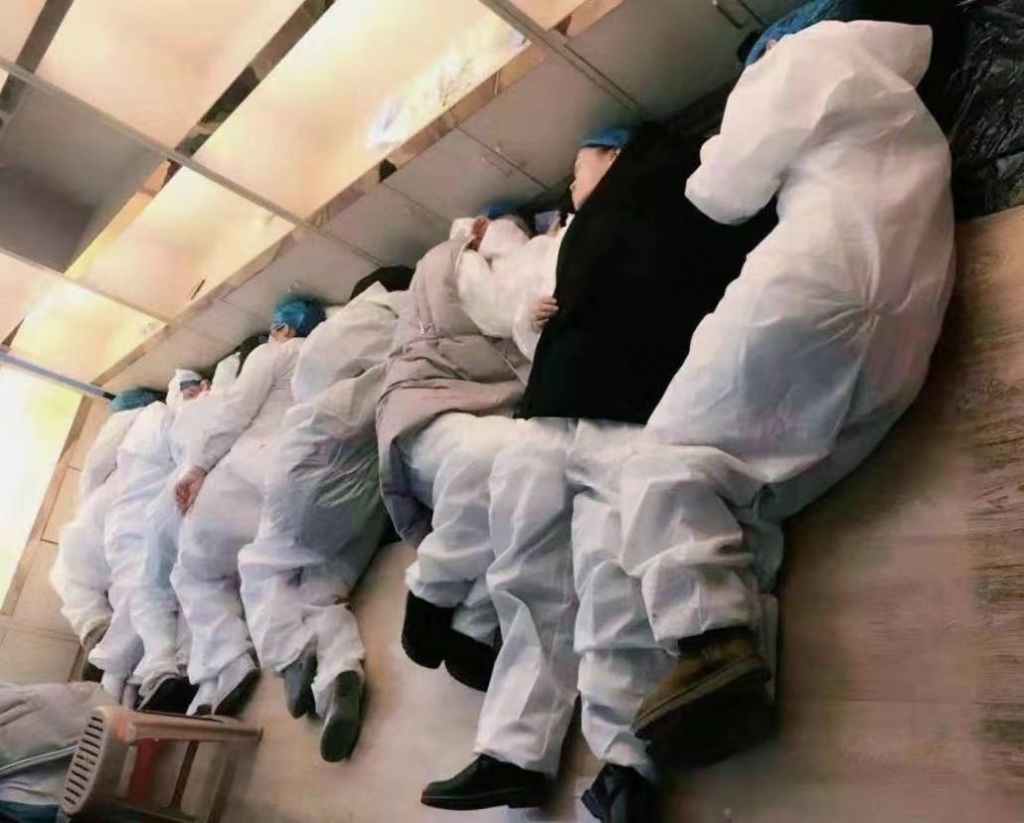 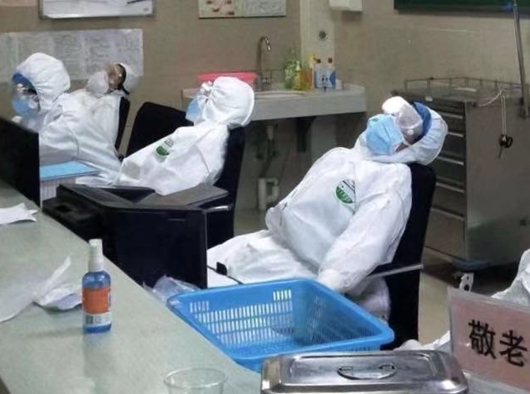 In times of anxiety and uncertainty it is often easy to overreact in a panic. This is clear from the many examples of unnecessary and discriminatory behavior currently being witnessed. Equally however, in testing times – as demonstrated by the many messages of support above – a great many more people rise above their fears and instead choose love.

The spread of coronavirus – as with many other issues in the globalised world of today – is clearly an international issue and requires a cooperative effort. Through unity, not division, together we can fight and win this battle.

Jamie Leigh Wright is an editorial writer for China Focus.
Coronavirus “Stabilizing” but China and World Remains Vigilant
Brexit Is Not Over. It Has Only Just Begun
Coronavirus: Chinese People Rise United to the Challenge
Davos 2020: Trump versus Greta—a Climate Showdown of the World
Use Wechat scan the qrcode, then share to friend or feed.