Davos 2020: Trump versus Greta—a Climate Showdown of the World

With unprecedented fires scorching much of Australia and the WEF working hard to push the climate debate to the top of the event’s agenda, the stage was well prepared for the so-called ‘Climate Showdown’ between Donald Trump and Greta Thunberg.

All eyes were on Davos this week as the small ski-resort nestled away in the Swiss Alps played host to the 50th annual World Economic Forum.

The theme for this year’s gathering of global elites was centered around the adverse environmental impacts of commerce and the growing importance of shifting to a more sustainable form of capitalism – termed “Stakeholder Capitalism” by event organizers.

The guest list included 53 heads of state, more than 1,680 business leaders, and the heads of international organizations including the IMF and NATO. But it was US President Donald Trump, and climate activist Greta Thunberg’s war of words that stole the show. The New York Times captured the environment well with their first lead Davos story entitled, “Trump and the Teenager: A climate showdown at Davos.”

In the lead-up to the event, the WEF said in a statement that “catastrophic trends” like global warming, climate change and the extinction of animal species would top the agenda at the annual meeting. As is customary, the WEF compiled its ‘Global Risk Report” prior to hosting the gathering. The report revealed that the top 5 concerns were all related to the environment with climate change topping the list. The economy by contrast had “disappeared” from the top five. 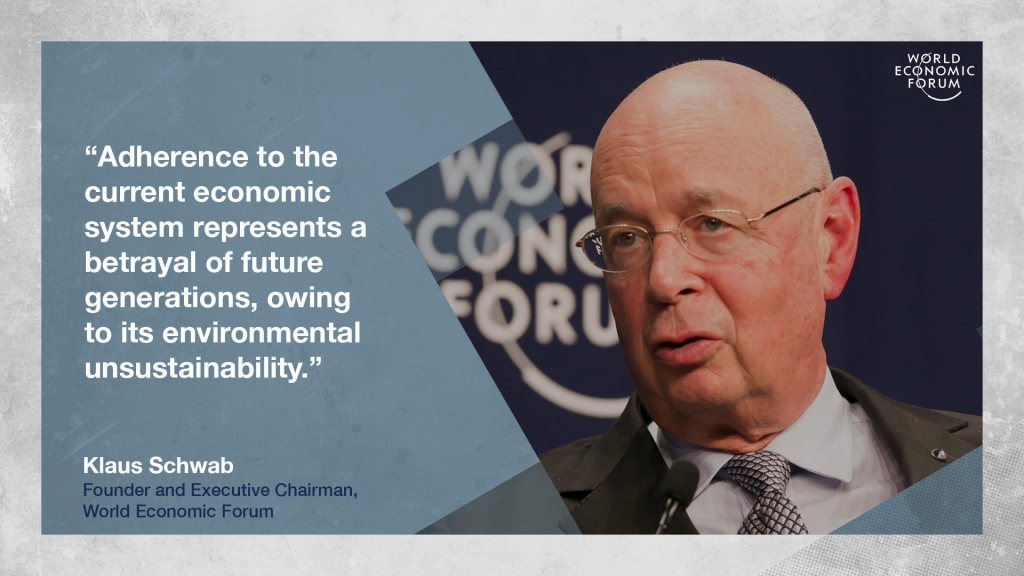 Founder and Executive Chairman of the WEF, Klaus Schwab, who has witnessed much change over the course of his 50 years presiding over the prestigious event, boldly declared; “Adherence to the current economic system represents a betrayal of future generations, owing to its environmental unsustainability.

In a display of the events commitment to facilitating the climate debate, one of the first discussions – titled ‘Forging a Sustainable Path Towards a Common Future – invited Greta Thunberg and other teenagers from the environmental movement to talk about the importance of activism.

Greta set the tone with a direct message to gathered business and policy leaders to treat the climate “seriously.” The young activist proceeded to quote from the IPCC (2018) report, “If we are to have a 67% chance of limiting the global average temperature rise to below 1.5 degrees Celsius, we had on January 1, 2018, about 420 gigatons of CO2 left to emit.”

“With today’s emission levels, that remaining budget is gone within less than eight years,” she added.

President Trump arrived a little after Greta had finished speaking at the Panel hosted by TIME CEO and Editor-in-Chief Edward Felsenthal.

In his much-anticipated Davos speech, the US president offered no real acknowledgment of this year’s central theme of environmental degradation and sustainability awareness. Instead Trump focused on the virtues of America’s economy under his leadership and basked in a considerable amount of self-congratulation.

Much of the speech in-fact sounded strikingly similar to one of his campaign rallies. “The economic turnaround has been nothing short of spectacular since I took office,” he stated. The US President declared that the US is witnessing an economic boom, “the likes of which the world has never seen before,” before rattling off a long list of statistics to support his claims. 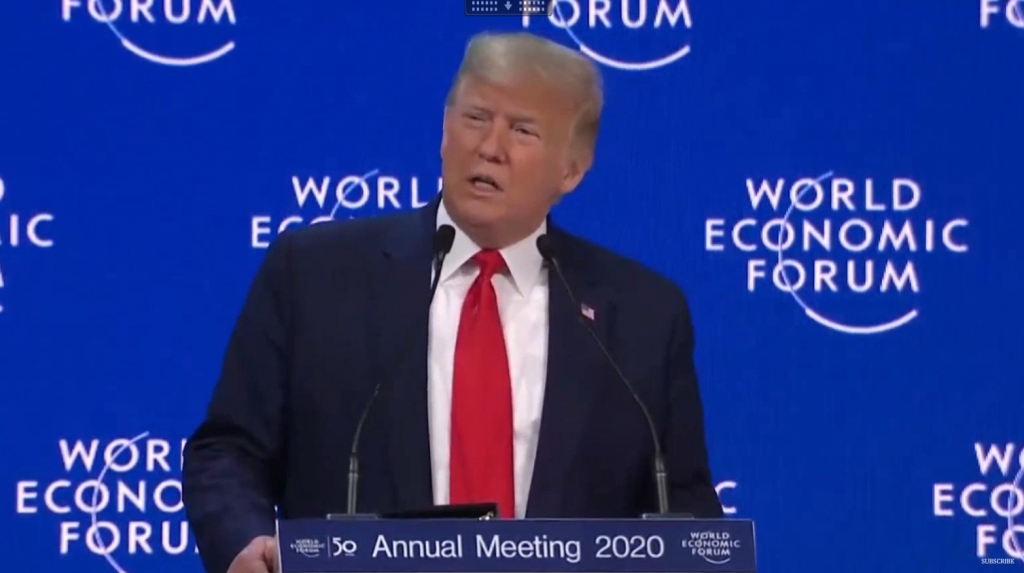 Trump proudly boasted that the United States no longer has to reply on importing energy from “hostile nations” as it is now “number one” in terms of fossil fuel production – perhaps not the best-judged statement given that event organizers had gone to great lengths to focus on the environment and sustainability. The influential international audience “barely clapped” during the president’s speech observed Reuters.

Chris Giles, the economics editor of the FT, commented how the crowd on occasion had to conceal their amusement and refrain from outright laughter over Trump’s “fact-free statements on the US economy.” The distinguished Nobel award winning economist, Joseph Stiglitz – clearly expected the President to be creative with the truth and so prepared a fact-checking sheet and distributed it to attendees in the auditorium where Trump was speaking.

Following his tirade of half-truths and misjudged boast of America’s fossil-fuel supremacy, the 45th President of the United States proceeded to double down on promoting his brand of economic nationalism. “The greatest responsibility a nation has is to its own citizens” Trump declared.  This did not go down well either with attendees – some of whom have long criticized the president’s “America First” rhetoric and protectionist policies.

Trump’s contribution to the discussion on the environment rested on two statements. The first was his announcement that America would join the ‘one trillion trees initiative’. The second was a thinly veiled swipe at Greta and other climate protesters, “We must reject the perennial prophets of doom. This is not a time for pessimism. This is a time for optimism,” he said.

Greta did not respond directly to the President’s “perennial prophets of doom” remark – she did however take aim at his tree-planting pledge. “Planting trees is good of course, but it’s nowhere near enough of what is needed and it cannot replace real mitigation and rewilding nature,” she said. 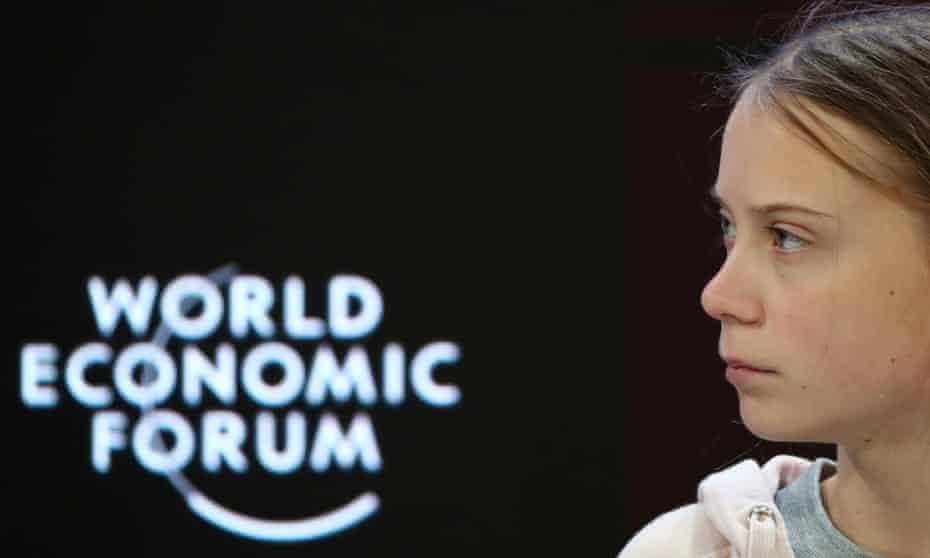 In her keynote speech at the annual meeting, the climate activist criticized leaders who denounce the US for leaving the Paris Climate Accords but remain silent over their own failure to keep to the commitments they made when their country signed up to the landmark agreement in 2016.

Speaking on behalf of world climate activists, she said, “We demand at this year’s World Economic Forum that participants from companies, banks, institutions and governments, immediate halt all investments in fossil fuel exploration and extraction, immediately end all fossil fuel subsidies, and immediately and completely divest from fossil fuels.”

Trump and Greta were undoubtedly the main focus of the 50th annual Davos meeting with commentators (myself included) focusing on the pair’s clash – however the reality is that this debate is bigger than the two personalities. This debate is not about Trump versus Greta, it is about nationalism versus internationalism, about economy versus environment, about the sharply opposite approaches—fight the global warming for the common destiny of mankind or neglect it just for own interests. It does not look to be going away any time soon.

The fact that the climate debate has been catapulted to the top of the World Economic Forum’s agenda gives an indication as to the direction in which the debate may be headed. From the discussions taking place by policy and business leaders in attendance – who appear to be moving closer to international cooperation efforts – it certainly does feel as if a watershed moment may have been passed.