How Should New Progress in China-U.S. Trade Consultations Be Understood?

More importantly, the recent rounds of high-level consultations between China and the U.S. have been carried out in an orderly manner under the direction of the heads of state of the two countries.

From February 21 to 24, 2019, the 7th round of China-U.S. high-level economic and trade consultations were successfully held in Washington, D.C., the U.S. capital. On February 24, U.S. President Donald Trump stated on Twitter that trade negotiations between the two countries have made substantial progress.

The U.S. government previously stated that if the two sides could not reach an agreement within 90 days following the meeting between the two heads of states in Buenos Aires on December 1st last year, the U.S. would raise the tariff rate from 10% to 25% on U.S.$200 billion of Chinese products beginning early in the morning on March 2. At the end of this round of negotiations, the U.S. said it would postpone raising tariff rate on China.

On February 25, Trump said in a speech at the annual meeting of the National Governors Association held at the White House that the Chinese delegation would soon return to the U.S., and that he would hold a summit with Chinese President Xi Jinping and sign the trade agreement. He also warned, however, that it remains possible that the two countries would not reach any agreement.

According to information released by the two governments, the results of this round of consultations have been reflected in specific issues including technology transfer, intellectual property protection, non-tariff barriers, services, agriculture, exchange rate and other related areas. These issues not only include current and emerging issues in China-U.S. economic and trade relations, but also confront structural differences, which is a full reflection of the positive effects accumulated across many high-level consultations.

The Key Role of Heads of State Diplomacy

Since the meeting of the heads of state of China and the U.S. in Argentina on December 1st last year, high-level officials of the two countries have conducted frequent consultations. According to the current situation, these consultations have clearly borne fruits. Although it is impossible to solve all the problems that exist in China-U.S. economic and trade relations at one time, there is no doubt that the two sides have shown a positive attitude towards discussing issues further and solving more problems in each consultation.

It is precisely because these consultations have been fruitful that U.S. President Trump immediately announced that he would delay U.S. tariff hikes directed toward China following the conclusion of the seventh round of negotiations.

This decision actually recognizes that mutual respect, equality, integrity, mutual benefit and win-win consultations are the best choice, in line with the interests of both China and the U.S. In other words, the joint efforts of China and the U.S. toward each other have also shown that dialogue and consultation, rather than economic and trade sanctions, can truly solve the controversial issues facing the world today.

The strategic leading role of the two heads of state in diplomacy can be said to have been fully carried out in the high-level bilateral economic and trade consultations. This kind of leadership strategy once again proves that in the development of today’s China-U.S. relations, close interaction and exchanges between the top leaders of each country are the key to maintaining a stable and positive relationship between the two countries.

Over the past 90 days, many rounds of consultations between China and the U.S. have demonstrated the willingness to engage in dialogue and cooperation. The Chinese side has not only insisted on resolving economic and trade frictions through dialogue and consultation and expanding cooperation, but more importantly, any consensus reached with the U.S. is based on the general principle of conforming to the interests of China and its people and is in line with the overall direction of China’s national development. 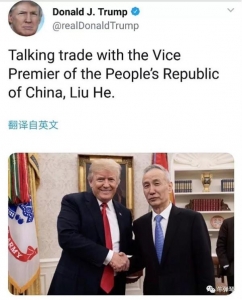 This means that China cannot accept any demands from the U.S. that are not in line with China’s interests or are contrary to China’s overall goal of sustainable development and opening-up. At the same time, China will also regard the adjustment of current China-U.S. economic and trade relations as the driving force and key component for the independent acceleration of industrial upgrading, deepening reform and continuing the expansion of openness.

The U.S. should understand the real value of China-U.S. relations and each other’s demands, bottom line and concerns. Relevant politicians in the U.S. should show confidence and determination that transcends domestic political interference and individual special interests, and work with Beijing to make the right choice for the long-term stability and healthy development of China-U.S. relations.