China now is clearly on the edge of anger, what will be the final card on the table? Let’s find out.

With the escalation of China and US trade war, China published a white paper on Monday to clarify the facts on China-U.S. economic and trade relations, demonstrate its stance on trade friction with the United States, and pursue reasonable solutions. 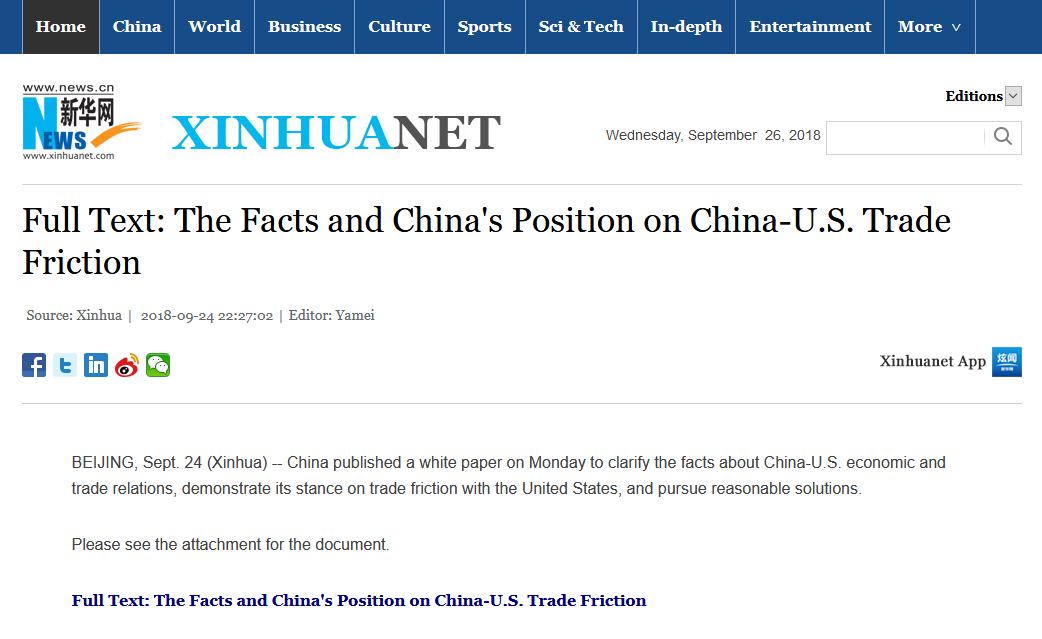 The white paper has been released on Xinhua’s front page

China Focus interviewed some experts, some of them pointed out that Trump Administration is deliberately misleading its people from domestic to overseas affairs, and make big cloaking by yelling about the trade issues. Is this what the trade war really about? And is Trump have some other plans in mind? China now is clearly on the edge of anger, what will be the final card on the table? Let’s find out.

China Focus： How should the Chinese Government’s white paper “The Facts and China’s Position on China-U.S. Trade Friction” be evaluated?

Professor Wang Hailiang: China published a white paper to clarify the facts about China-U.S. economic and trade relations, as well as demonstrate its stance on trade friction with the United States. This kind of paper is rare in the field of bilateral trade as it includes extremely comprehensive content, sincere attitudes and rigorous discussion.

The white paper amply embodies China’s consistent practice of setting forth facts and reasoning things out, instead of carrying out a debate with the U.S., which is in deep contrast with the hegemonic style of the U.S., which wields sanctions easily.

The white paper explains the ins and outs of bilateral trade between China and the United States, the intertwined interests of both countries, and its significance in terms of world prosperity. It also clarifies the absurdity of the U.S. accusations and the destructiveness of Sino-U.S. confrontation.

China boasts sufficient patience in Sino-U.S. trade friction and is willing to continue to solve problems through negotiation and consultation. In the meantime, China is also fully prepared for the escalation and continuation of trade frictions, and there is no illusion that problems will be resolved easily. A long-term dispute between the two sides cannot be ruled out.

China Focus: China’s Ministry of Commerce called off its meeting with U.S. trade delegates several days ago. What are your thoughts on this development? Will China take other countermeasures?

Professor Wang Yong: China’s reasoning behind cancelling the meeting is mainly because the U.S. has announced plans to impose additional tariffs on $200 billion of Chinese exports to the United States just after it sent a meeting invitation to China, destroying the atmosphere of the talks. Apparently, the U.S. hasn’t shown its sincerity in regards to settling problems with China through talks and has even caused headlines that are certain to cause further trade conflict. Currently, Donald Trump is confronted with various scandal investigations, leading to a decline in his poll ratings. Additionally, Trump is facing the pressure of the mid-term elections in the middle of November. Therefore, Trump has an obvious motivation to canvass voters. In light of the current situation, right now is not the best time for China-U.S. trade negotiations to take place. China has taken countermeasures in response to U.S. intentions to heighten trade conflict. China is likely to take more necessary measures later. 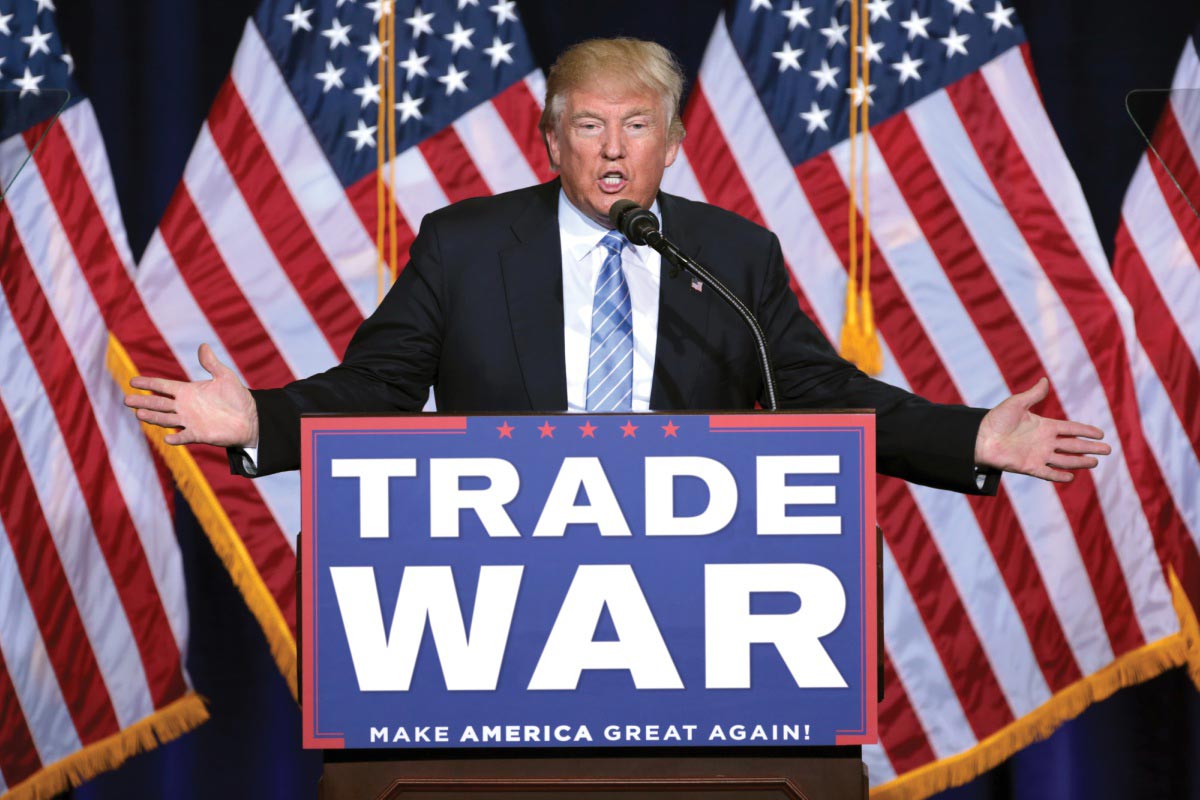 China Focus: Currently, there are growing opposition voices in the U.S. in regards to American tariff policy. Why does the Trump administration continue to exert extreme pressure on China?

Professor Wang Yong: The reason mainly lies in American domestic politics. To win the support of Trump’s base voters, and fulfil commitments made during the previous presidential election campaign, Trump is showing his tough attitude by continuously adding to pressure on China. However, his tough actions are faced with opposition from various American interest groups, especially people from American business circles and agricultural states as well as farmers, who think that U.S. initiation of a trade war with China damages their own interests, particularly when such aggression takes the form of imposing more tariffs on China.

Mr. Sun Chenghao: Opposition in the United States is not comprehensive. The opposition has mainly appeared in the business sector, the agricultural industry and other related areas. In the manufacturing sector, however, especially after the U.S. and Mexico negotiated an economic and trade agreement, support for Trump increased. Trump’s hardcore voters are still the so-called “blue-collar whites”, and these people show greater concern in regard to job backflows in manufacturing and other areas. Therefore, an important consideration for Trump in his decision to exert pressure on China is to continue to cater to these supporters.

On the other hand, the unreasonable demands Trump has placed on China have not been met. Trump’s pressure on China is not only designed to solve the trade deficit problem, but also to forcefully change China’s economic development model, requiring China to make unrealistic concessions toward the United States on issues such as intellectual property protection, state-owned enterprise subsidies, technology transfer and market opening.

In addition, Trump’s confidence saw a dramatic rise due to the “inspiration” brought by the U.S.-Mexico and U.S.-South Korea agreements. The U.S. and Japan resumed high-level consultations, and the U.S. and Europe also reached a principled consensus, which will further strengthen American pressure on China.

China Focus: Will the outcome of the mid-term elections bring changes in China-U.S. trade conflict? 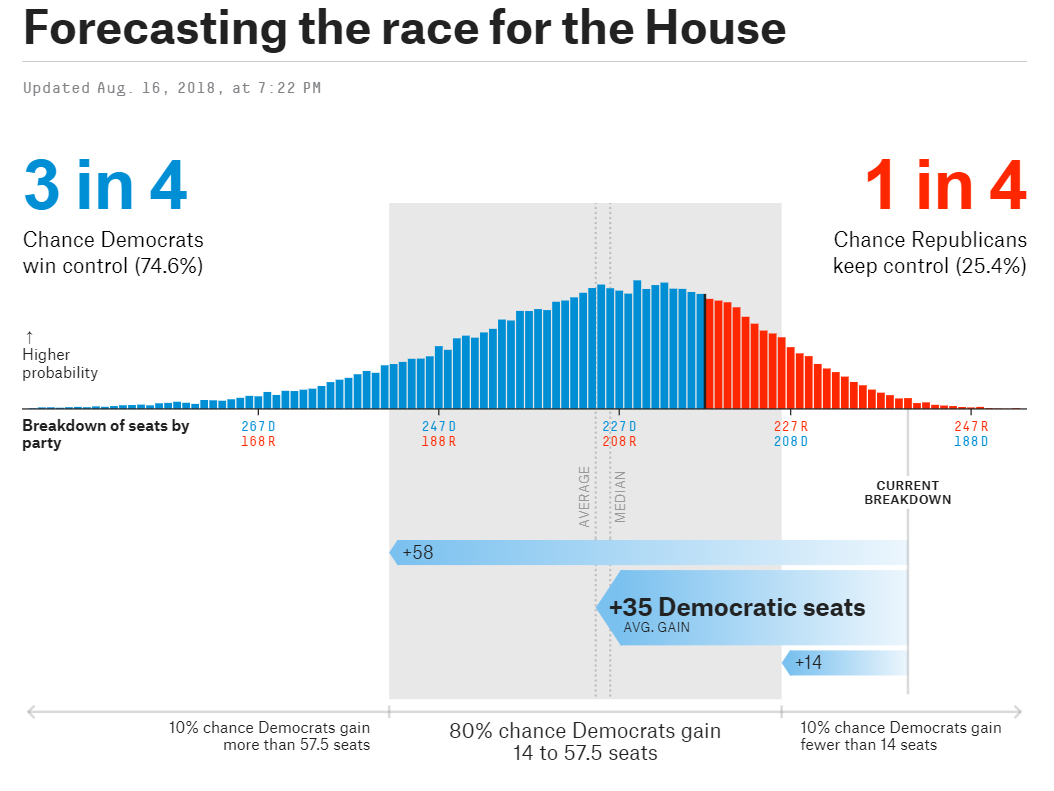 Professor Wang Yong: After the mid-term elections, the tense situation of U.S. domestic politics may be eased, and the Trump administration may have more opportunities and room to reach consensus with China and issue a joint plan going forward. However, there are other possibilities. For example, the Republican Party could lose the control of the Senate and House of Representatives in the midterm elections, which would lead to a greater chance that the Democratic Party chooses to launch impeachment proceedings against President Donald Trump and internal conflicts between the two parties in the U.S. will escalate. It is also possible that room for the Trump administration to negotiate with China in terms of trade issues could shrink because of the harsh competition between the two parties in the U.S. Therefore, there are still many uncertainties of what will happen after the mid-term elections. Additionally, one key is that U.S. industrial and commercial circles and agricultural interest groups make efforts to promote talks and reconciliation between China and the U.S.

Mr. Sun Chenghao: The midterm elections are not likely to be a turning point, in large part because the reasons behind Sino-U.S. trade friction are not Trump’s only domestic political considerations. The Trump administration has far-reaching strategic considerations that have helped to guide its instigation of trade frictions with China. As the White House has successively issued its National Security Strategy and National Defense Strategy reports since the end of last year, the United States has specified that it views China as a “strategic rival”. Such competition will be comprehensive and multi-disciplinary. In the field of economics and trade, Trump first carried out a harsh attack on China, and there may be certain negative spillover effects.

The Trump administration’s economic and trade strategy toward China is intended not only to solve domestic political problems, but also gradually form a comprehensive strategy in regards to China. Its goal is to curb China’s rapid development. Therefore, regardless of the outcome of the midterm elections, the Trump administration is unlikely to change the overall situation of competition with China in the short term.

Wang Hailiang, deputy director and a researcher at the Shanghai Institute of East Asian Studies

Wang Yong, professor at the School of International Relations of Peking University

You May Like
Is the U.S. Trying to Start a Currency War?
World Bank President Change May Have an Adverse Effect on China
40 Years of China-U.S. Relations
Halt of Trade War Creates Opportunities for China-US Negotiations
A Glimmer of Hope for a Negotiated End of the Trade War
U.S. Firms’ Cooperation with China Not Affected by the China-U.S. Trade War
China Outstrips the US as World’s Largest FDI Destination
Use Wechat scan the qrcode, then share to friend or feed.