The Media Battle to Control the Hong Kong Narrative

Hong Kong protesters have assaulted other members of the press as well as their fellow citizens that disagree with them. Though very little condemnation will be found in the western media.

Editor’s Note: The prevailing Western media describes violence committed by rioters in Hong Kong as “peaceful protest” whilst condemning similar actions in their own countries. The basic media principles of objectiveness and fariness is nowhere to be found.

For four months now, protests have gripped Hong Kong and by and large the world’s media. Across the globe, the scenes in Hong Kong have been broadcast into the homes of hundreds of millions of television viewers and have become a central talking point amongst much of the commentariat. However, the scenes, the talking points, as well as the overarching narrative concerning the protests, differs significantly between media platforms.

The majority of Western media organizations have portrayed the protests as an organic movement of “pro-democracy” activists battling against an encroaching and tyrannical Beijing government. Whilst Chinese media and a handful of western platforms maintain that it is foreign influence and interference which is fueling the protests in Hong Kong. Chin Yik-chan, assistant professor of media and communication studies at Xian Jiatong-Liverpool University in Suzhou, observed that the difference in the media’s coverage is driven by “ideological division”.

In the United States, The New York Times accused China of “waging a disinformation war against Hong Kong protesters”. The Times article claimed that China has “aggressively stirred up nationalist and anti-Western sentiment using state and social media, and it has manipulated the context of images and videos to undermine the protesters”. Similarly, NPR states that “Beijing has turned to a raft of disinformation tactics to stir up nationalist support at home, creating a very different narrative of what is happening in Hong Kong by levying its control over the flow of information”. In the United Kingdom, the editorial line is much the same. The Guardian recently penned an article titled “Beijing’s new weapon to muffle Hong Kong protests: fake news”. Whilst The Independent accuses China of waging an “information war” in an attempt to “turn its citizens against Hong Kong protesters”. This is just a small sample of the rhetoric coming from Western media organizations – the list goes on. In China, the former head of China’s largest and most influential media organization, Xinhua, Li Congjun, accused Western media of using their “powerful dissemination abilities” to “vilify” China. Li continued that “some hostile Western forces and media do not want to see a prospering socialist China”. 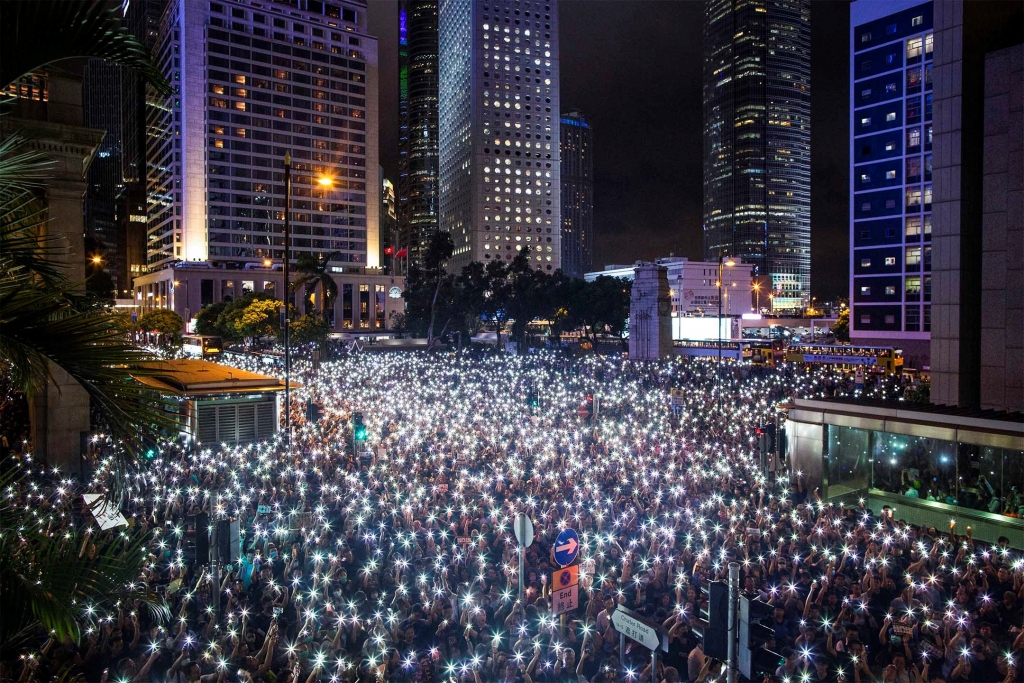 Given the gulf that has opened up between competing narratives and the escalating rhetoric on both sides of the ideological divide, it is clear that battles are not only being fought by protesters and police on the streets of Hong Kong but by journalist and editors in the news rooms of international media organizations too. The battleground over the Hong Kong narrative is not only confined to primetime TV slots and editorials and opinion pieces either. US based social media companies, Twitter and Facebook, have shut down more than 200,000 accounts they have deemed to be involved in a “Chinese government influence campaign”. Exactly how the social media behemoths determine which users are involved in such a campaign remains unclear, given that – as AP noted – of those silenced accounts, “few tweeted more than once”.

Since the unrest in Hong Kong began, the majority of western media organizations have taken a clear position in support of the protesters. Indicative of this position is a quote taken from Canadian Broadcasting Corporation (CBC) which stated “many [protesters] see this as their last chance to prevent the authoritarian Chinese powers in Beijing from taking away rights in the territory”.

Support from Western media continues despite some Hong Kong protesters resorting to increasingly violent methods. In early September, Sky News interviewed a group of masked protesters who proudly displayed the standard equipment many are now carrying with them on demonstrations. Along with goggles, masks, and gloves, the kit also included metal tools, as well as high-powered torches and laser lights which the reporter explained protesters use “to try and blind the police”. The reporter added “no one here has been involved in violence before, but they are ready for it now”. This video was captioned “the middle-class, idealistic warriors fighting for democracy in Hong Kong”. 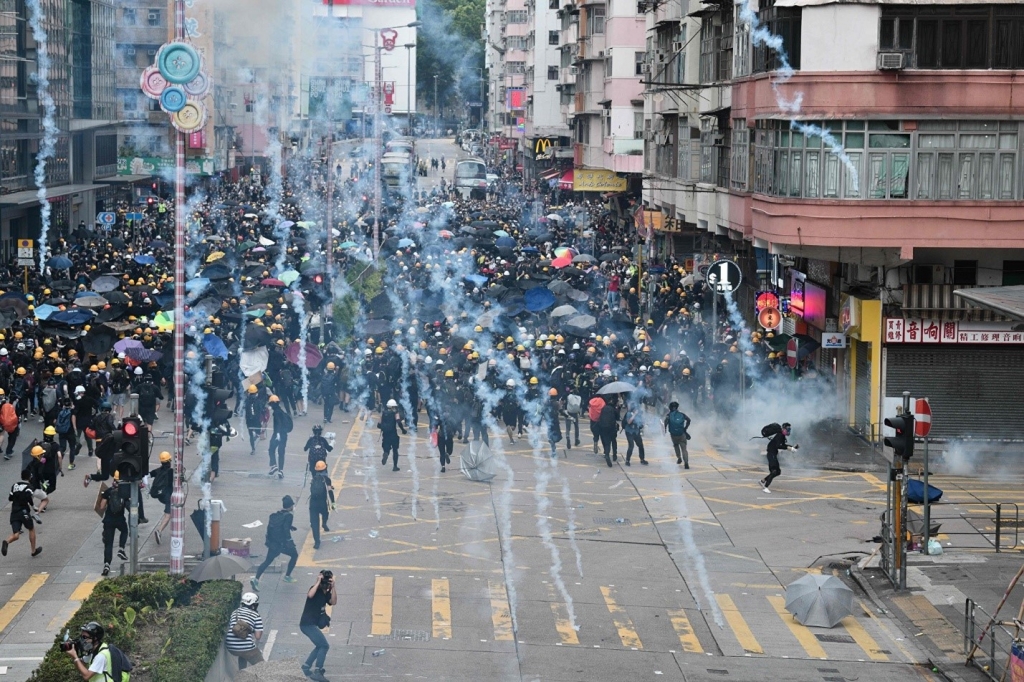 I was in Hong Kong on the September 15, the day some protesters threw Molotov cocktails at government buildings and set fire to Wan Chai MTR metro station. At around 8pm, I arrived in Causeway Bay area – a couple of miles from the center of Hong Kong – as a group of around 200 protesters were shouting and spraying graffiti under the cover of umbrellas. I saw a man with a bloody face being wheeled away from an angry group of protesters into an awaiting ambulance. At the scene, there were scores of western media personnel gathered complete with recording equipment, though none attempted to film the incident. I asked one of the onlookers – clearly marked PRESS – what had happened to the bloodied man? The reporter informed me that “they [protesters] had set on him like a pack of wild dogs”. I was later told by the same reporter that the bloodied man was a member of the press. Despite this incident, the reporter who had earlier appeared visibly disgusted by the unprovoked attack on a fellow journalist, reported later that the days protests were “largely peaceful”. Sadly, such violence – and the accompanying media silence – is not an isolated incident. Hong Kong protesters have assaulted other members of the press as well as their fellow citizens that disagree with them. Though very little condemnation will be found in the western media.

Aside from the violent methods – which it must be noted, is carried out by only a small minority of protesters – some of the so-called peaceful methods of the protesters also deserve scrutiny. The first is the waving of foreign flags. On numerous occasions, elements of the Hong Kong protesters have waived the Union Jack, the colonial British Hong Kong flag, whilst signing “God Save The Queen”. On other occasions, protesters have flown the US flag to the chants of “Donald Trump… Liberate Hong Kong”. Much of the media in the US and the UK have reported on this without comment. It doesn’t take a stretch of the imagination to envisage how the same media organizations would react if protesters in the US or UK carried the Chinese flag calling on Chinese leader to intervene in their country. 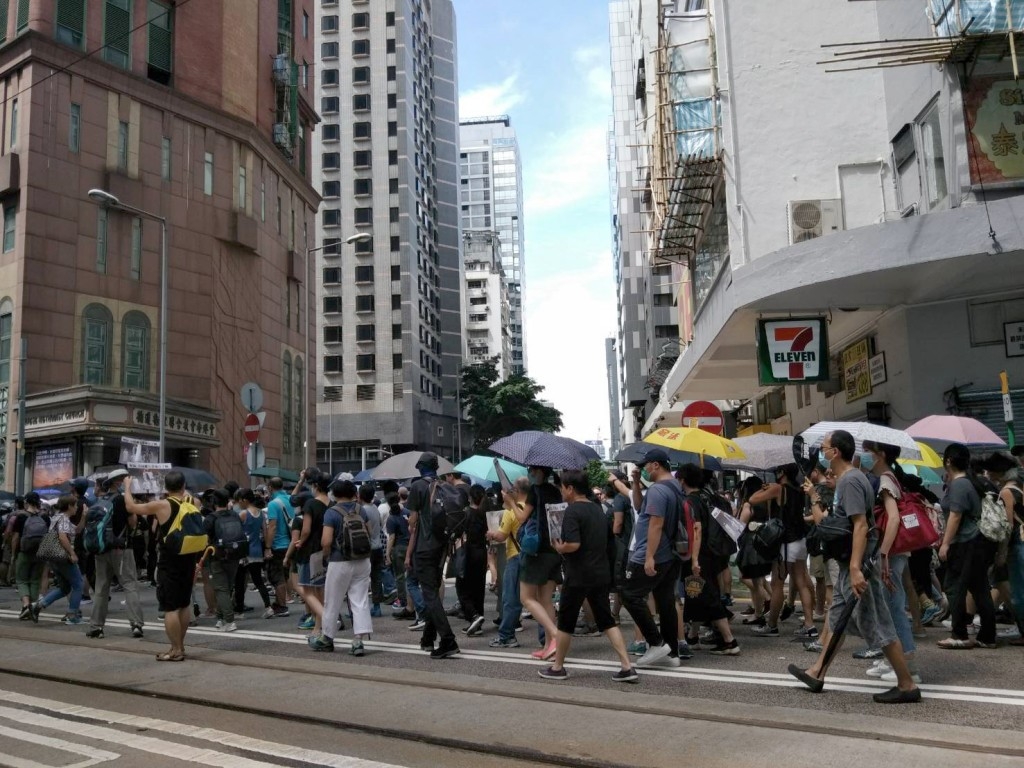 The second questionable method overlooked by much of the western media is the use of the Nazi swastika and referring to China as “Chinazi”. Protesters wave an altered version of the Chinese national flag – the ‘Chinazi flag’ – which rearranges the yellow stars to form a swastika with a hammer and sickle positioned in the center. This grotesque flag is not only confined to protesters in Hong Kong, RT noted that a protest took place in Washington D.C. earlier this month with protesters promoting the so-called Chinazi flag. This comparison of the Chinese government with the racist and genocidal Nazi regime should be called out for the revolting and highly offensive act it is. Again, sadly, it is not. This hideous smear is of course intended to offend the target of the attack – the central government of China – but the inappropriate use of this symbol also trivializes the horrendous atrocities committed by the Nazi regime and as such is highly offensive to the families of holocaust victims and survivors. It is quite remarkable that this has caused such little controversy within the European and US media.

It should be noted that if protesters in the UK or the US employed methods that the Hong Kong protesters have used –throwing Molotov cocktails, attacking people they disagree with, and provocatively labelling opponents as Nazi’s– the response from the very same media organizations would be quite different. It is safe to assume that rather than voice support, such acts would be lambasted and condemned in the strongest possible terms. This highlights a glaring double standard. 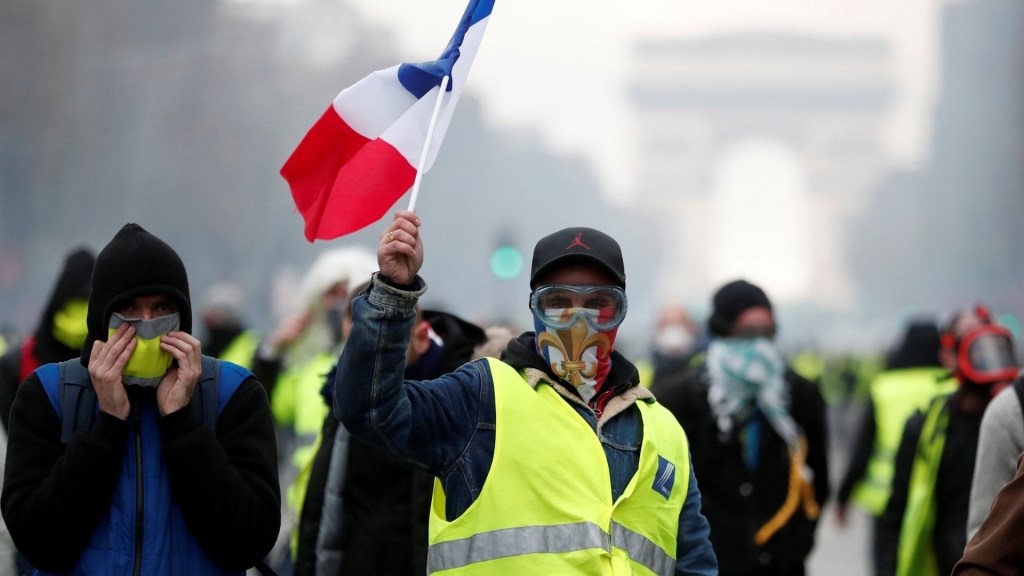 Western media are guilty too of fetishizing the Hong Kong protests, evident by the sheer volume of coverage received versus similar protests in other countries. Take as a means of example, France. Remember the Yellow Vest protests? Just last weekend, 7,500 police officers were deployed in Paris alone in order to contain the largest demonstration by protesters since May 1. Despite the close proximity to the UK to France, many British citizens are unaware that such an event took place due to the media’s gaze firmly fixated on Hong Kong. Former UK politician and media commentator George Galloway half joked that given the “veritable blizzard” of in-depth analysis of the Hong Kong protests, everything “except the protesters shoe sizes” are known. That western media organizations accuse China of orchestrating a propaganda campaign over events in Hong Kong whilst doing exactly that themselves reveals a shameless hypocrisy.

Frustrated with the overtly one-sided narrative coming from western media outlets in regards to Honk Kong, China’s foreign ministry recently sent a letter to more than 30 overseas media outlets in Beijing calling on them to remain “impartial” and “objective” in order to “end the chaos and violence and restore order”.