Critics say that the government’s reluctance to impose meaningful lockdown measures sooner resulted in much unnecessary death and suffering. Naturally, Boris Johnson’s announcement to begin easing lockdown restrictions has been met with much confusion and anger.

The UK government is accused of a “catalogue of failures” over its handling of the novel coronavirus and is under increasing pressure over its controversial decision to relax lockdown restrictions.

In a televised address to the nation, Boris Johnson revealed on May 10 what he called, Britain’s “roadmap” for reopening society. The plan set out a three-stage gradual adjustment to lockdown measures and would be “conditional” upon certain criteria being met. The first stage includes, unlimited outdoor exercise, increased financial penalties for breaking restrictions and a return to work for all those unable to work from home.

As part of the prime minister’s plan to ease lockdown restrictions, the government campaign to “Stay Home. Protect the NHS. Save Lives” has been replaced with a new message advising citizens to “Stay Alert. Control the Virus. Save Lives.” 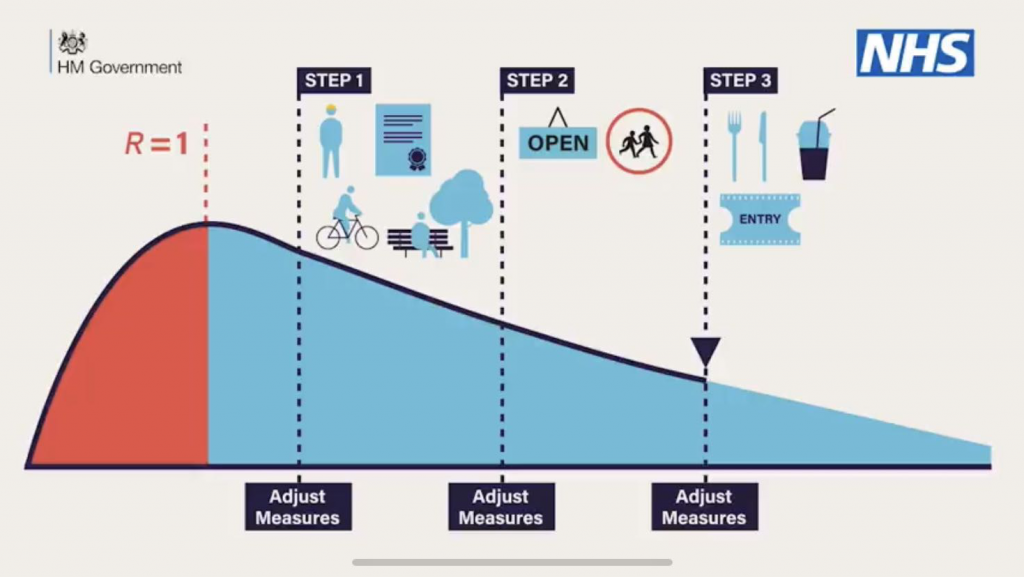 Johnson assured the British public that he had consulted leaders of all political parties across the four nations of the United Kingdom. The devolved administrations of Scotland, Wales and Northern Ireland however, made clear that they will not be following the prime minister’s proposals.

In Scotland, First Minister Nicola Sturgeon said the message remained for people to stay home and stressed that the advice to businesses in Scotland had not changed. Commenting on the PMs decision to relax restrictions and replace the ‘Stay Home’ message with ‘Stay Alert’, Sturgeon confessed “I do not know what ‘Stay Alert’ means.”

“The Sunday papers is the first I’ve seen of the PMs new slogan,” Sturgeon wrote on Twitter.

“It is of course for him to decide what’s most appropriate for England, but given the critical point we are at in tackling the virus, #StayHomeSaveLives remains my clear message to Scotland at this stage.”

Leader of the Labour Party, Kier Starmer, looked visibly astonished in an interview with the BBC just moments after the prime minister’s announcement.

“The statement raises as many questions as it answers,” Starmer said.

“Basically, those that can’t work from home are being told to go to work tomorrow, that’s millions of people – and that means, go to work in about 12 hours – mixed with the message that if it’s possible to do so, don’t use public transport.”

In a statement, Starmer added, “I think what the country wanted tonight was real clarity and a sense of consensus – and I’m afraid we haven’t got that.”

As of May 10, official figures show that 31,855 people have died in the UK from COVID-19, though many believe the real number to be much higher. Analysts at the Financial Times cite data from the Office of National Statistics (ONS) to estimate that the actual death toll could be “more than double” the official count.

With the highest deaths recorded in Europe, the government’s decision to ease lockdown restrictions has received much criticism from a growing chorus of voices. Indeed, many believe that that the government’s initial reluctance to implement lockdown measures sooner is largely the reason why Britain is in such an unenviable position.

“They went into lockdown too late and now seem far too keen on coming out too early. People are not fools and I think they can see that the death toll is too high and could have been avoided,” said Alex Kenny from the National Education Union.

Speaking on behalf of the UK capital’s police officers, the Metropolitan Police Federation (MPF), says the government is sending mixed messages and that authorities should have imposed tougher lockdown measures from the beginning.

MPF’s Ken Marsh told BBC Radio 4 that authorities “needed to be firmer right from the beginning”. He said: “Had we been very stringent from the off… I think we would have a better result now.”

With the British public unable to take to the streets to protest against the government’s handling of the pandemic, campaign group The People’s Assembly hosted an “online takeover” instead. Thousands watched live as the online event poignantly titled The Fight For Our Lives, brought together critical members of parliament and labour union leaders together to demand that the UK government should prioritize the health and safety of its citizens over the interests of capital and the economy. The hashtag #HealthBeforeWealth quickly spread across social media platforms. 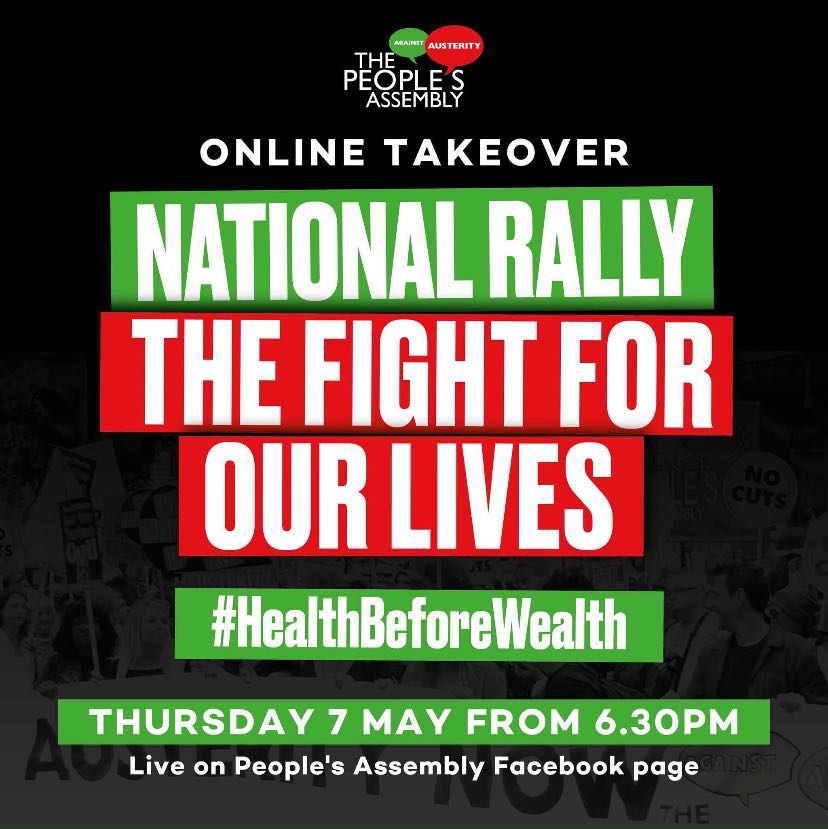 Unfortunately for the British public, the governments controversial decision to lift lockdown restrictions is only the latest element in what has been described as a “catalogue of failures” throughout the Covid-19 pandemic.

Back in March, criticism centered around the government’s lack of clarity and failure to deliver a coherent and comprehensive plan of action detailing how the UK would tackle the deadly virus. There was confusion over why, contrary to WHO advice, there was no test-track-trace strategy being implemented. And there was also growing concern over why Boris Johnson’s government was reluctant to impose lockdown restrictions despite the country’s death toll growing higher by the day.

In stark contrast to the vast majority of COVID-19 impacted nations who quickly introduced strict social distancing and border controls, the UK followed a unique strategy known as “herd immunity.”

The original herd immunity ‘strategy’ – if it can be called such a thing – was to allow as much of the population as possible to become infected so that Brits acquire coronavirus antibodies. The apparent infection ‘target’ was 60 percent of the population, or 40 million people in real terms. Indeed, Boris Johnson’s message at this time was one of “taking it on the chin” and allowing the disease “to move through the population, without taking so many draconian measures.”

After the government quickly rowed back on the herd immunity plan, lockdown measures were begrudgingly introduced and public concern quickly shifted towards the wholly unprepared healthcare system and the lack of protection available to medical and care workers.

A paper published in the prestigious British medical journal, the Lancet, called the government’s handling of COVID-19 with regards to the National Health Service (NHS), “a national scandal.” Professor Richard Horton of the London School of Hygiene and Tropical Medicine, reached the conclusion after speaking with doctors and nurses about conditions on the frontline. “Their messages have been as distressing as they have been horrifying,” he reported.

“The continued lack of private protective equipment (PPE) is a national scandal and the government’s litany of broken promises over the last month is shameful,” said a spokesperson for the second largest labour union in the country, Unite.

As a further indictment of the UK’s handling of the coronavirus pandemic, the government’s own advisers have condemned ministers over a lack of transparency.

A report compiled by the Scientific Advisory Group on Emergencies (Sage) which criticized the government’s lockdown proposals was heavily redacted before it was released to the public. Stephen Reicher, a professor of social psychology at the University of St Andrews and a member on the governments Sage advisory committee, lamented the government over what he said was “Stalinist” censorship.

“The greatest asset we have in this crisis is the trust and adherence of the public. You want trust? You need to be open with people. This isn’t open. Not a good look.”

Evidently, in crisis-struck-Britain, a deep divide has opened up. On one side rests the British government who maintain they have acted consistently in the interests of the British people and accept no criticism over what amount to clear failings of strategy, preparation and communication. On the other side stands, doctors, nurses, care workers, union leaders, academic advisers, political opposition leaders, and large swathes of the public who accuse the government of failing to in its primary responsibility: keeping its citizens safe.